A week after the tragic attacks, three of the main newspapers edited in Madrid, with different editorial lines, have had the same cover story this Thursday: the Mossos (Catalan police) were warned. On the one hand, El País and El Mundo both reported that the Belgian police had contacted the Mossos to warn them about Abdelbaki Es Satty, the imam of Ripoll who died in the explosion of a house in Alcanar. On the other hand, ABC said that the judge had warned the Catalan police that the Alcanar bombs could be for an attack.

It did not take long for reactions to spring up online. "A Belgian policeman and a judge destroy the propaganda tale of the Catalan government," was the headline on Libertad Digital. The article (in Spanish), signed by Pablo Planas, included the line: "These 'coincidences' destroy the Catalan government's story constructed with the 'major' of the autonomic police, Josep Lluís Trapero, as its great protagonist with makings of a state".

The reality, however, is a little different: it was an "unofficial" communication and the Belgian police was asking for information about the imam of Ripoll. They didn't warn of anything anything. An agent of the Vilvoorde police sent an email to a commander from the general comissary of information of the Mossos that they had met at a conference two years earlier. They asked if they had any information on Es Satty, who wanted to apply for a job in the small Belgian city.

The head of the Strategic Analysis Unit of the Mossos searched their database, but found no results. That was the reply they sent the Belgian. The imam's criminal record did not figure in their database. The communication was informal because, currently, the Mossos cannot have a direct relationship with foreign police bodies. They are vetoed from joining Europol by the Spanish state.

In their report, El País even recklessly published the name and surname of the agent with whom the Belgian police exchanged information. The Mossos have found themselves forced to ask that, at terrorist warning level 4 of 5, personal information of no policeman related with the investigation be broadcast. "It can gravely affect the personal safety of the agents," they warned.

In the days following the attacks, this is what some of media has focused its efforts on: attacking the good reputation of the Mossos, a police force who they want to identify with the Catalan independence referendum coming on 1st October. Some of the protagonists of the manipulation following the 2004 Madrid bombings have turned up again. 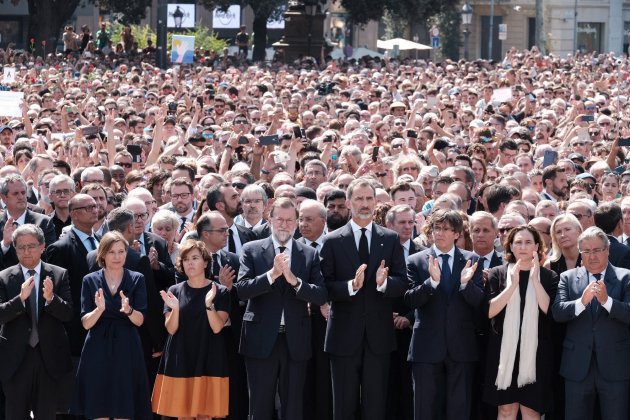 Doubts about the Mosso

The Mossos managed in only five days to dismantle a jihadist cell allegedly comprised of twelve members: eight now shot dead, four arrested. Despite some mistakes, the team, together with local police, has won recognition from the international press, but not the great Spanish headlines. Rather, precisely the opposite: they have tried to sow doubts as to how it was carried out.

Cayetana Álvarez de Toledo, former PP (People's Party) deputy, member of the Libres e Iguales ("Free and Equal") anti-Catalan indepedence platform and a journalist, embodied this attitude in an article (in Spanish) she wrote in El Mundo. "Nothing to object to? Well, little to boast about," she wrote. And she gave a list of supposed errors: nobody had detected the radicalisation of twelve people, the CIA had warned about an attack on the Rambla (reported by El Periódico and denied: the Mossos do not have a direct relationship with the CIA), the lack of bollards, that Younes Abouyaaqoub escaped operation Jaula, and that the alleged mastermind of the attacks, the imam, had been to prison, "a book radical".

They've done the same with Barcelona mayor Ada Colau and the controversial bollards, after some media (and political leaders) accused her of allegedly not following the Spanish government's recommendations. El Español (a newspaper edited by Pedro J. Ramírez, a leading exponent of the 2004 manipulation) did so in an article (in Spanish), which also mentioned the false warning from the CIA to the Mossos. Her Catalunya en Comú (Catalonia in Common) party has taken on the task of demonstrating (in Catalan/Spanish) that they paid attention to everything the Spanish state asked them.

Outside of Spain it's all seen a little differently. The New York Times this Thursday published a report in which it concluded that, if the imam passed unnoticed, it was for a lack of communication between the police forces. "Catalan law enforcement authorities have long complained that they are not allowed to work on their own with foreign intelligence organisations such as the C.I.A.," the newspaper said. For their part, The Wall Street Journal headlined an article on Tuesday "Catalonia Showcases Autonomy in Terror Attack Probe". And the Frankfurter Allgemeine thinks the same (in Catalan/Spanish).

Just a few hours after the attacks in Barcelona and Cambrils, the two main Spanish newspapers published their editorials, with more or less explicit references to the process of Catalan independence, the referendum for 1st October and the independence movement.

El País's editorial (in Spanish) said: "An attack of this magnitude should be a warning that brings back to reality the Catalan political forces that, from the Catalan government, Parliament and independence movements have made the secessionist pipe-dream the sole and only activity on the Catalan political agenda in recent years".

For their part, El Mundo indirectly blamed the supposed migratory pro-independence politics. The Catalan authorities, argued the Madrid newspaper in its editorial (in Spanish), have to reflect "on a policy of welcoming in which precedence has been given to electioneering interests, linked to the independence movement, above national security".

Curiously, three days later, the same paper's editorial denounced a supposed exploitation of the attack by the Catalan government because Interior minister Joaquim Forn differentiated between Spanish and Catalan victims. "It is just one more example of the crude form of politics that has taken root in Catalonia," they stated.

In their time, El Mundo has fed theories like the one that says that Catalan vice-president Junqueras is a convert to Islam

The attempt to link the independence movement and jihadism is not new (in Spanish). As a matter of fact, El Mundo itself has fanned theories (in Spanish) like the one that says that Catalan vice-president Oriol Junqueras, a professed Catholic, has converted to Islam.

In the pages of that same newspaper, the journalist Arcadi Espada assured (in Spanish) that "among the vanities of Barcelona is that of violence". He then wrote, "shortly after five in the afternoon yesterday, a white van broke onto the Rambla and killed or seriously injured dozens of people". Also the day after the attacks, Lluís Bassets, associate editor of El País, maintained (in Spanish) that "there is an irresponsible frivolity and a good part responsible in the political organisations that they have undertaken these agitation campaigns tinted with xenophobia," with regard to the independence movement.

Catalan president Carles Puigdemont has been attributed with false intentions of wanting to mix the attacks with the independence process, when this was actually done by the journalist who asked him the question. All this led to inappropriate cartoons.

Beyond the attempts to relate the independence movement with jihadist terrorism (and beyond the bollards and the CUP, Popular Unity Candidacy party), there is a common story: these attacks have to stop the "road map" [to independence], as if one thing had something to do with the other. Also many calls for unity.

It's even been reported that Younes Abouyaaqoub, the driver from the attack on the Rambla, was a volunteer for the independence referendum campaign. Various pro-Spain media outlets, like La Gaceta and Dolça Catalonia, but also television channels like La Sexta, they broadcast it (in Catalan/Spanish). This was based on a report in Corriere della Sera, which the Italian newspaper itself later rectified. 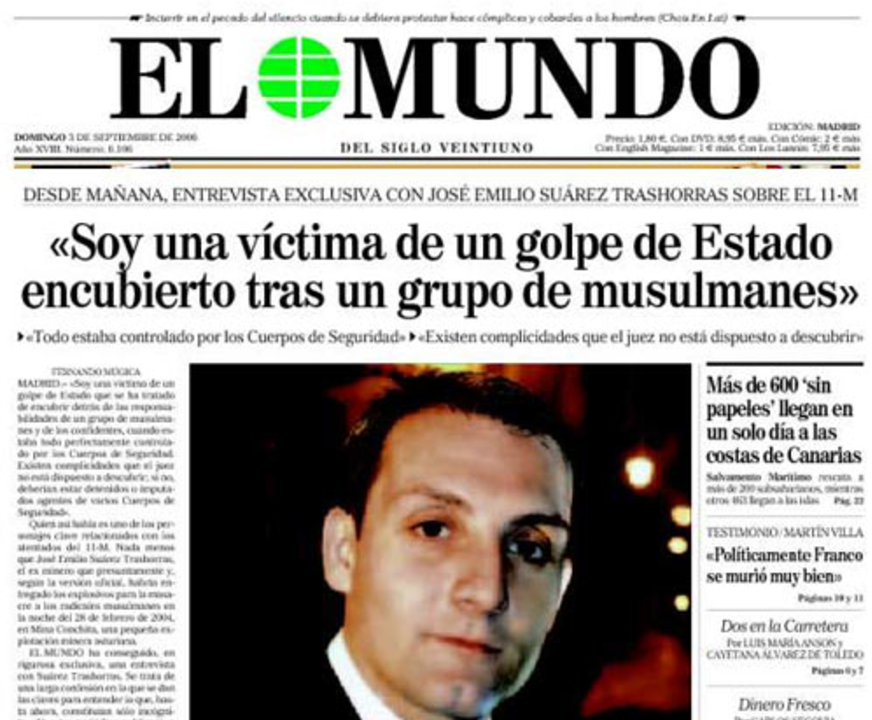 To find a historical precedent we have to look back thirteen years. On 11th March 2004, the worst massacre produced by Islamist terrorism in Europe took place in Madrid. That same day it was already being used politically. First, by then-prime minister José Aznar's Spanish government, who, three days before a Spanish general election, fed the theory that the ETA Basque separatist terrorist group were behind the attack. The afternoon of the attack itself, Aznar called the editors of the main Spanish newspapers to confirm that the Basque group were responsible. Already by that time, everything already pointed towards Al Qaeda, who did end up claiming it. Aznar's move did not turn out well: his party lost to Zapatero by 1.3 million votes.

In spite of all the evidence, some of the right-wing Spanish media, especially Pedro J. Ramírez's El Mundo and Libertad Digital, continued fanning the flames of the conspiracy theory, with the support of some of the PP (People's Party) led by Ángel Acebes and Eduardo Zaplana.

Thirteen years later, it is difficult to find someone who defends this kind of theory, merely designed to win an election taking place three days later. But even three years ago Pedro J. Ramírez said (in Spanish) that "the verdict doesn't solve the questions about this massacre".

Finding parallels with the present, a The New York Times correspondent noted in their article this Thursday that this manipulation in 2004 lost the PP the election. “Voters then punished a conservative government for its rush to blame the Basque separatists rather than jihadi militants for the train bombings,” wrote Raphael Minder.