The Spanish government has said this Wednesday that the Mossos d'Esquadra (Catalan police) cannot access the information centres of Europol since they "work with member states". That's the statement of the Spanish government spokesperson, Íñigo Méndez de Vigo, in Barcelona in answer to the Catalan government's question as to why its police corps cannot take part in the European body.

"In the Security Board there was discussion about how the relationships between the police corps could be improved. There are two Mossos agents who belong to the body linking the Spanish state with Europol and we will increase that, but it's clear that it's the National Police who are represented in Europol as they have jurisdiction over the whole territory," explained De Vigo, who is also minister for Education, Culture and Sport.

Contradictions with the regulations

However, Europol rules explicitly allow "direct contacts" with the Mossos, without the need to pass through the filter of the Spanish government. The agency's spokesperson, Tine Hollevoet, clarified this after the vice-president of the Spanish government, Soraya Sáenz de Santamaría, raised doubts about the possibility of the Mossos joining the body, alleging that the agency has its own operational norms.

Hollevoet's answer made it clear that it's possible for the Catalan police to join Europol, but the Spanish state has to authorise the "direct contacts between its competent authorities and Europol", an option which it seems Mariano Rajoy's executive is not contemplating.

In any case, the minister wanted to de-emphasise the question and celebrated the collaboration between the several police bodies. At the doors of the Gran Teatre del Liceu theatre on the Rambla, where he thanked the workers for their response to the terrorist attack, De Vigo asked for the avoidance of controversies after a "barbarous and cruel" episode and assured that the cooperation between the administrations and the police bodies will continue to be carried out in a "satisfactory" way. 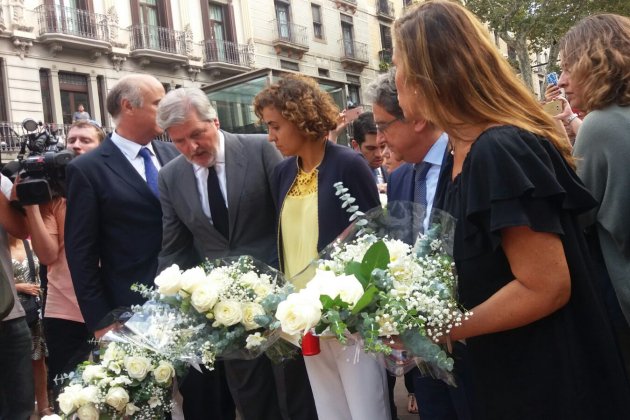 After making this statement, the minister went to the Miró mural and left a bouquet of flowers, accompanied by the Spanish Health minister, Dolors Montserrat, the representative of Spanish Government to Catalonia, Enric Millo, and the ex-president of the Catalan PP (People's Party), Alícia Sánchez-Camacho.