Here are the fourteen ministers in Pere Aragonès's Catalan government

These are the 14 ministers in the new Catalan government that will be presided over by Pere Aragonès, seven proposed by each of the two coalition partners, the Republican Left (ERC) and Together for Catalonia (Junts). 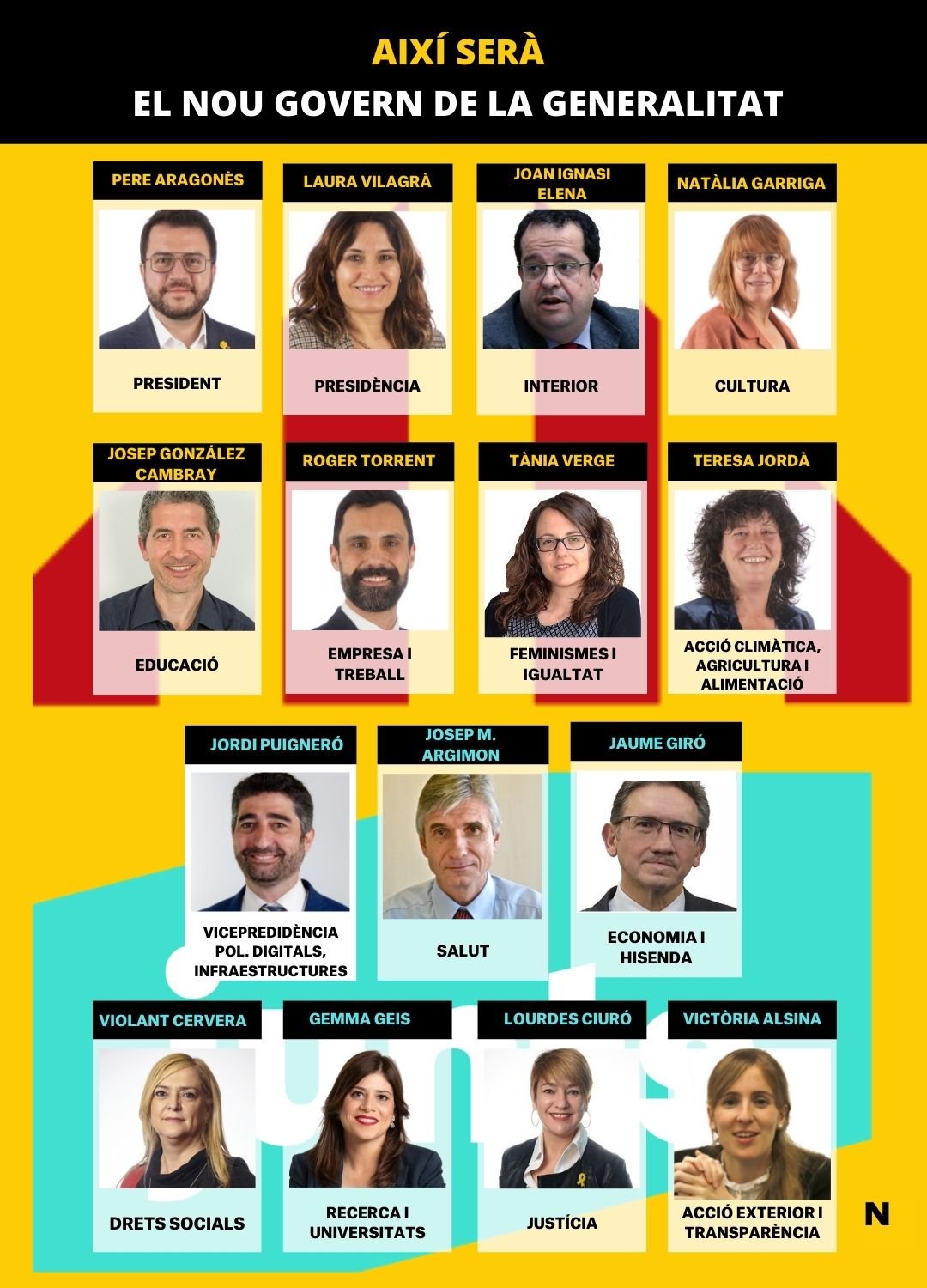 Pere Aragonès i Vidal is a law graduate from the Universitat Oberta de Catalunya (UOC), and has a masters in Economic History from the University of Barcelona. In 1998 he joined the youth section of ERC and was elected as a deputy in the Catalan Parliament in 2006, at the age of 24. At the time of the 2017 referendum, he was secretary of economy ministry, but unlike most of his colleagues was not charged with any offence in relation to the independence process. Subsequently, he became vice president and economy and treasury minister in the Quim Torra government, and following Torra's disqualification from office by the Supreme Court in September 2020, became the acting leader of the Catalan government. Aged 38, he is Catalonia's youngest president in the modern era.

Vice President and Minister of Digital Policies and Infrastructures (Junts)

Puigneró is an engineer specialized in information technology, and is considered close to the president in exile Carles Puigdemont. He studied at the University of Surrey and worked in Frankfurt as an ICT engineer in the computer area of a German bank. His political activity began in the JNC, the youth section of Convergència and in the mayoralty of Sant Cugat del Vallès. He is the driving force behind the Catalan nanosatellite.

Minister of the Presidency (ERC)

Vilagrà has a degree in political science and administration from the Autonomous University of Barcelona (UAB), where she specialized in tourism and commercial promotion. She was mayor of Santpedor (Bages) and was the number two on the ERC list for the Catalan elections of 14th February, 2021. She entered the Republican Left party in its youth section, the JERC.

Minister of Economy and Treasury (Junts)

Giró has a degree in journalism from the University of Navarra, and a degree in Business Administration and Management from ESADE. He was general manager of the La Caixa Banking Foundation - the section of the savings bank dedicated to managing its social and cultural activities, dissolved in 2014 when the structure of the bank changed. In 2017, during the referendum period, he was the only CaixaBank board member who opposed the transfer of the headquarters to Valencia. He left the organization in December 2019. He is well-connected in the Catalan economic and social world, having been part of Joan Laporta's successful candidacy for the presidency of Futbol Club Barcelona this year, but declined to join the board after the Barça election was won.

Minister of the Interior (ERC)

A politician who has a very good relationship with Oriol Junqueras, Elena changed political horses from the Catalan Socialists to the pro-independence parties, and was president of Catalonia's National Pact for the Referendum. He has been mayor of Vilanova i la Geltrú. He has a law degree, specializing in labour and copyright law. It is the first time that ERC has taken charge of this particularly sensitive ministry.

Argimon has a degree in medicine and a doctorate from the Autonomous University of Barcelona (UAB), with a specialization in preventive medicine and public health from Barcelona's Bellvitge Hospital, as well a diploma in epidemiology and statistics from Pierre and Marie Curie University in Paris, a master's degree in evidence-based healthcare from Oxford University and a master’s in epidemiology and health planning from the University of Wales. Until now he has been Catalonia's public health secretary, and has become a familiar face with the public through his leadership role in the fight against Covid-19.

González Cambray is an industrial technical engineer with a marketing degree, and has worked as a secondary school teacher at the Universitat Oberta de Catalunya (UOC). Up till now he has been the general director of public education centres for the Catalan government. Earlier, in president José Montilla's tripartite government in the 2000s, he was first deputy secretary of immigration and then director of territorial services in Barcelona in the Department of Social Action and Citizenship. He has also been the coordinator of the area of culture, education and sports on the Barcelona Provincial Council.

Alsina holds a PhD in political and social sciences from Barcelona's Pompeu Fabra University, with a degree in management and public innovation from ESADE. She has been a professor and academic director at the Center for Urban Science & Progress at New York University, as well as a researcher at Harvard Kennedy School. Her area of specialization and research was innovation in the public sector. She was Catalan government delegate in the United States and co-coordinated the Catalonia 2022 expert group promoted by president Quim Torra.

Minister of Feminisms and Equality (ERC)

Verge is a professor of political and social sciences at Pompeu Fabra University and was a member of the electoral commission created to oversee Catalonia's 1st October referendum, for which she was prosecuted and then, finally, acquitted. She led the “Equality Unit” between 2014 and 2021 and has also coordinated a gender studies module.

Minister of Business and Employment(ERC)

Ciuró has been a member of the Spanish Congress and since 2019 has been at the head of the Junts municipal group in the city of Sabadell. She has a degree in law from the Autonomous University of Barcelona. In Congress she was a spokesperson for Juntos on the commissions for justice, interior, housing and equality.

Garriga is the secretary for cultural policy, education and sports, nominated by ERC. She comes to the ministry after having previously been director of services for the Catalan government's department of the vice-presidency, economy and treasury, working alongside Pere Aragonès. She has a law degree from the University of Barcelona and a master’s degree in management from the School of Public Administration of Catalonia.

Cervera has a degree in hispanic philology from the University of Lleida and a postgraduate degree in information technology for non-computer scientists, as well as in information resource management from the Universitat Oberta de Catalunya. She entered politics through the JNC youth branch of Convergència, and has previously worked in government in the social welfare area, as director general of civic and community action.

Minister of Research and Universities (Junts)

Geis has been vice-rector of the University of Girona, part of the team of rector Sergi Bonet, and is considered close to president Carles Puigdemont. She is a Doctor of Law and entered politics following the 2017 referendum. She is a member of Greenpeace and was one of the promoters of the pro-independence grouping La Crida, which was subsequently integrated into Junts. She is a Catalan MP.

Jordà has a degree in modern and contemporary history from the Autonomous University of Barcelona. She has been mayor of Ripoll and a member of the Spanish Congress. In the last legislature, she already held the position of Minister of Agriculture, and now she has now added the portfolio of Climate Action.