Argimon: "Spaced doses" could enable all Catalans over 30 to have jabs by July 15th

All Catalans over the age of 30 could be vaccinated by July 15th if the time intervals between doses are expanded. Or what would be the same thing, 5 million Catalans could have a first dose of coronavirus vaccine administered by mid-July. This was explained by the Catalan public health secretary, Josep Maria Argimon. For the health chief, the importance of spacing the first and second doses is key. He made his calculations, however, based on the expectations for arrivals of shipments of the Pfizer vaccine, which is currently the most reliable in terms of meeting its delivery schedule. This plan would mean that the period between the two shots required for maximum immunity would rise from 21 days to 8 weeks.

This is precisely why, taking advantage of the fact that some 20 Catalan scientists have drafted a manifesto making this request, Argimon has asked the Spanish health ministry to "reconsider" its decision on the time interval between doses. A request he already made last week. In this regard, the secretary placed the emphasis on herd immunity and not so much individual protection. He also stressed that getting 5 million Catalans vaccinated, in addition to helping to reduce serious cases and hospitalizations, would imply an "emotional, social and economic recovery".

If the doses cannot, in the end, be spaced out, Argimon clarified that by 15th July there will be close to 1.5 million Catalans fully vaccinated, in the 45-and-over age group.

Vaccination for those over 50 begins on May 10th

Meanwhile, Argimon confirmed that from May 10th, general vaccination will begin for the age group between 50 and 59 years, as announced over the weekend. At some points, however, it could even start earlier, although it depends on each health region and teams at the CAPs (primary care centres).

The secretary also confirmed that two cases of the Indian variant have been detected in Catalonia.

With regard to the vaccination campaign, health department official Carmen Cabezas explained that Catalonia has received a total of 2,799,330 doses of Covid vaccines. The medicines that have arrived this week are those from Pfizer with 272,610 doses. The others usually arrive at the end of the week and for this reason, the data are from last week: 258,600 doses of AstraZeneca and 34,400 of Moderna have been received. 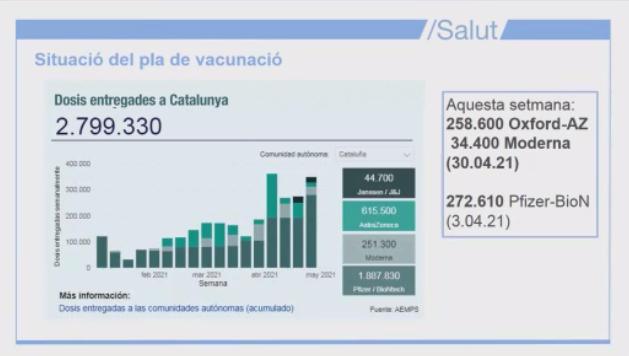 State of the vaccination plan in Catalonia / Captura Salut

In this regard, people over 80 years of age, are receiving the Pfizer vaccine. The 70-79 age group can receive both the Pfizer and Janssen vaccines, the latter requiring only a single dose. For the group between 60 and 69 years of age, the assigned vaccine is AstraZeneca. Moderna is reserved for people at very high risk. 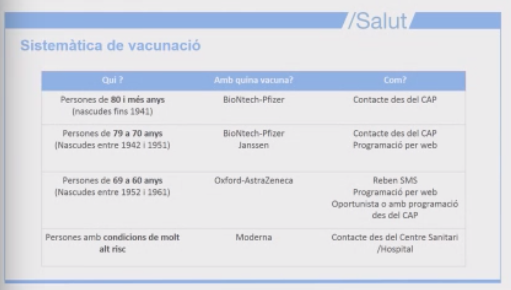 Vaccination processes: Column 1 shows the population group, Column 2 the vaccine(s) designated to it, Column 3 the system for setting up vaccination appointments / Salut

Infections among those already vaccinated

According to the Catalan health department, since December 27th - when the vaccination campaign began throughout the European Union - there have been 247,682 cases of coronavirus of which 10,553 (4.24%) are or have been in people already vaccinated.

Argimon confirmed, once again, the persistence of the Covid pandemic in Catalonia. There are still between 10,000 and 10,100 new cases per week. "The level is going down, but very slowly," he said, with an eye on intensive care occupancy, which he said was 473 beds occupied by Covid patients in Catalonia. “It's a good rate of descent, but we can’t lower our guard,” he noted.