The Enxaneta is in orbit: Catalonia launches satellite named for “human towers” sport

At seven minutes past seven this Monday morning, Catalonia's first nanosatellite rocketed skyward off the launchpad at Baikonur Cosmodrome in Kazakhstan. The so-called Enxaneta, named after the small child who ascends all the way to the top in the traditional sport of castells - human towers - has gone into orbit as planned after its journey atop a Soyuz 2 rocket and this afternoon had already established first communications with Catalonia ground control. This was announced by the digital policies minister, Jordi Puigneró, who celebrated the feat and said that the "mission has been a success".

"Today we laid the first stone in Catalonia's new space economy. We've done it," he exclaimed in a tweet in which he also thanked the team for their work. 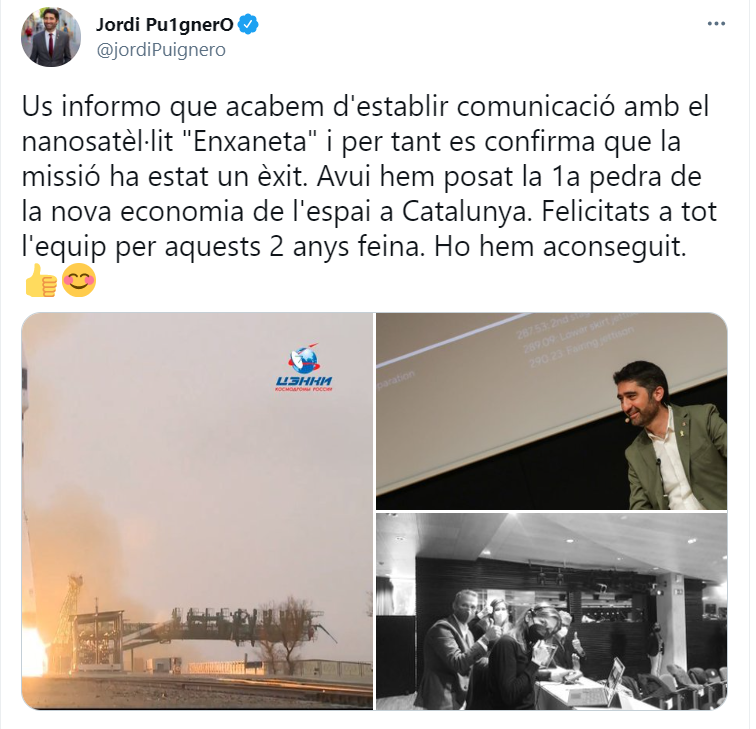 Now, before the shoe-box satellite goes into service, it will have a calibration period of three to four weeks, and will then be expected to operate for a period of three or four years. At that point, gravity will force it back into the atmosphere and it will disintegrate.

The Enxaneta is about the size and shape of a shoe box, consisting of three CubeSat modules joined together. It weighs about 10 kg and  travels at a speed of about 7 km per second and makes a complete orbit of the Earth every 90 minutes.

The name was chosen by viewers of Catalan public TV's news programme for children, Info K. The nanosatellite has been put into orbit as part of the "NewSpace" strategy of the Catalan Government, and it is the first of two small satellites that the Catalan administration plans to put into orbit to improve digital connectivity within Catalonia and provide Earth observations.

It will pass over Catalonia twice a day and all the data it collects on its way will be transmitted to the ground station located in the observatory at Montsec, in Lleida province. The data will initially be used by the departments of the Catalan government, with the aim to subsequently open it up to universities, research centres, technology centres and private companies.

What will it do?

The Enxaneta, developed by the companies Open Cosmos and Sateliot through a tendered public contract, will deploy global Internet of Things (IoT) connectivity services with 5G coverage. In this way it will allow communication and the acquisition of data from sensors located throughout Catalan territory, even in areas that are difficult to access or do not have conventional terrestrial telecommunications coverage.

Specifically, the satellite will monitor river flows and water reserves, in order to improve water management efficiency; it will monitor and protect wildlife; it will receive weather data from remote locations; it will monitor soil movements to anticipate natural disasters, and watch over livestock and crops to detect disease and define more efficient strategies.

The Generalitat of Catalonia is confident that this growing sector will generate 1,200 jobs in the next 4 years and a turnover of 280 million euros. The Enxaneta cost 574,000 euros.