Six months on from the Catalonia terrorist attacks

The shadow of the "Ripoll imam", Abdelbaki es Satty, and his status as an informant of Spain's intelligence agency, the CNI, is one of the great unknowns, entirely a state secret, still looming over the terrorist attacks in Catalonia last summer. Six months ago today.

That hot afternoon of 17th August 2017, 13 people died as they were walking along Barcelona's famous Rambla, brutally run over by the van driven by one of the members of the imam's cell; two more lost their lives later, one of them stabbed by the fleeing driver, and more than 100 were injured. Islamic State assumed responsibility for the attack.

Hours later, a woman died in Cambrils, in the south of Catalonia, at the hands of one of the occupants of a vehicle fleeing from police. The day before, two members of the cell, one of them the Ripoll imam, had died in an explosion at a house in the Montecarlo housing area, in Alcanar, near the Valencian border, where the terror group had more than 100 butane bombs stored.

According to investigators, the terrorists were planning a large attack on some famous place in Barcelona, possibly the Sagrada Familia. When that plan failed after the accident in Alcanar, they switched to the vehicle-ramming attack in the heart of the city, an especially deadly tactic used in previous months in Nice, Berlin, London, Stockholm and Paris, leaving dozens dead.

The Mossos d'Esquadra, Catalonia's police force, in a whirlwind operation coordinated by the head of the force, Josep Lluís Trapero, and Catalan Interior minister, Joaquim Forn, which the shocked public could follow almost live, managed to neutralise the cell, striking down five of its members in a shooting in Cambrils. Trapero was removed from his role following Spanish government intervention in Catalonia and Forn has been in pretrial detention without bail in Estremera prison near Madrid for over 100 days over the events surrounding the independence movement.

Last November, the CNI admitted that it had contacted Es Satty when he was serving a sentence in Castelló prison for drug trafficking. The contact was carried out "following protocols, as all the state's security forces do". Everything indicates that the imam created his cell thanks to contacts from prison and, once in Ripoll, through indoctrinating the town's youth. Was he still in contact with the CNI when the attacks happened? That's the great question, the terrible question which looms over last August's attacks.

Ripoll's town council has asked to act as part of the prosecution in the legal investigation into the attacks, ACN (Catalan News Agency) reports. They want to access "all the information" in order to take the inquiry to "the very end". The town's mayor, Jordi Munell, has denounced the "silence" and lack of response from the Spanish government and Interior ministry over the imam's links with the CNI. "We will always have the question in our minds: if someone had the information, could it have been avoided?"

On that 17th August, the state's police forces had only a residual role in the response to the crisis, exactly the opposite of what happened during the 1st October independence referendum. On the day of the attacks, the presence in Barcelona of prime minister Mariano Rajoy and his interior minister, Juan Ignacio Zoido, was almost superfluous given the ability to control the situation shown by the Catalan government and police in the most serious attack committed on Spanish territory since the 11th March 2004. 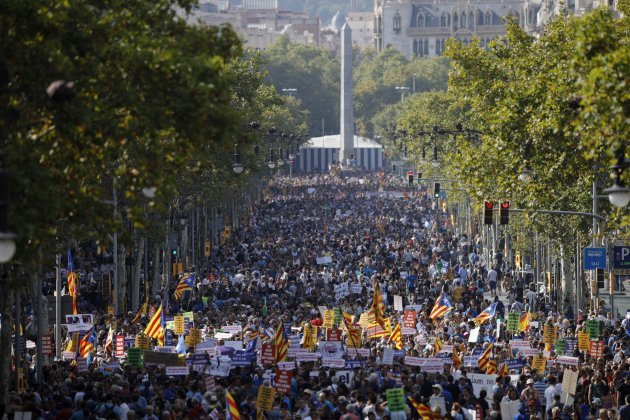 In those dark days, the corners of the luminous Rambla which had been the scene of such tragedy, from the Canaletes fountain down to the Pla de l'Os mosaic, became an improvised popular memorial to the victims. On Saturday 26th, nine days after the attacks, the highest officials of the Spanish government, the country's political parties and king Felipe VI, in an unheard-of decision by a head of state, headed, alongside president Carles Puigdemont and the rest of the Catalan government, a demonstration on Barcelona's passeig de Gràcia under the slogan No tinc por - "I'm not scared".

In that demonstration, some "preventative" estelades, pro-independence Catalan flags, appeared scattered around the march. The independence movement was trying to avoid unionists taking advantage of the gathering and its large media impact to sow Barcelona with Spanish flags. From Madrid came a clear message: the brutal attacks had to lead to a reflection over the independence "road map", in other words, they had to stop it. Six months later, Puigdemont and four members of his executive are exiled in Brussels. And the rest of the government has been to prison or is still there.