The demonstration in rejection of the terrorist attacks in Barcelona and Cambrils under the slogan No tinc por ("I'm not scared") has turned into an ordeal for the king Felipe VI and the Spanish prime minister Mariano Rajoy who were received with loud boos and whistles which didn't leave them along the whole route. The march took place with no further incidents and, according to the Urban Guard, attracted half a million people who are still arriving to plaça Catalunya in a festive atmosphere.

The leaders joined the march from calle Casp, a street above plaça Catalunya where the stage was set up and the speeches were made. The majority of the politicians from Madrid or the rest of Spain came to this point in coaches. The arrival of the Spanish vice-president, Soraya Sáenz de Santamaría, with other members of the Spanish executive received the first boos of the afternoon.

From then on, the same thing kept happening, intensifying with the arrival of the Spanish prime minister and the monarch, accompanied by Catalan president Carles Puigdemont and the mayor of Barcelona, Ada Colau. One the march had started, the whistles and shouts of "out, out" were repeated every time the large screens showed the image of the king.

The jeering caused evident discomfort amongst the Spanish politicians. And, in fact, the demonstration ended earlier than planned. This didn't save the king from a final, loud booing when leaving the square, accompanied by the other leaders.

Both the CUP (Popular Unity Candidacy) as well as a large number of Catalan-linked and non-governmental organisations had expressed their protest at the presence of the king at the event. They accuse him of collusion with the regime in Saudi Arabia, who they claim acts as an inspiration for the doctrine of jihadi terrorists and as a source of funding for them. 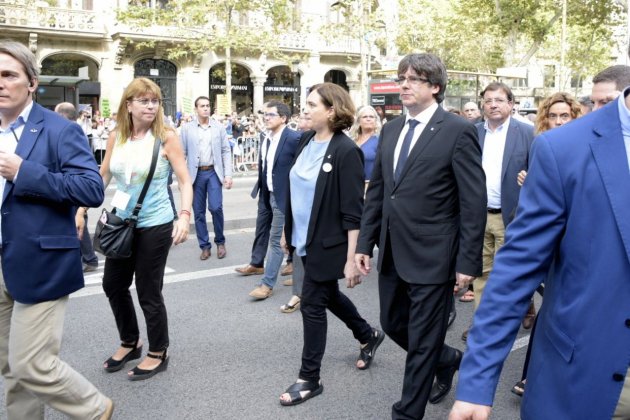 The organisations, more than 170 of them, yesterday presented a protest manifesto and this afternoon, at 4pm, have held a protest of rejection. They asked attendees to the main demonstration to wear blue t-shirts to show their opposition to the monarch's presence.

This enormous banner was just behind the head of the march and held high, so it appeared as a background in images of the king. Many of the attendees, moreover, carried protest signs, distributed by the organisations, with slogans like "Mariano [Rajoy], we want peace, not to sell arms" and "Imagine a country that doesn't sell arms". 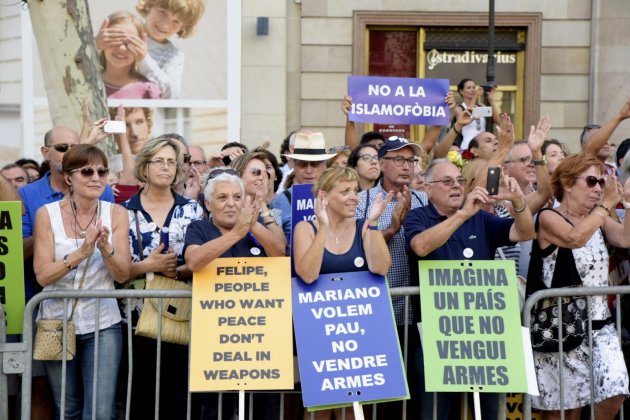 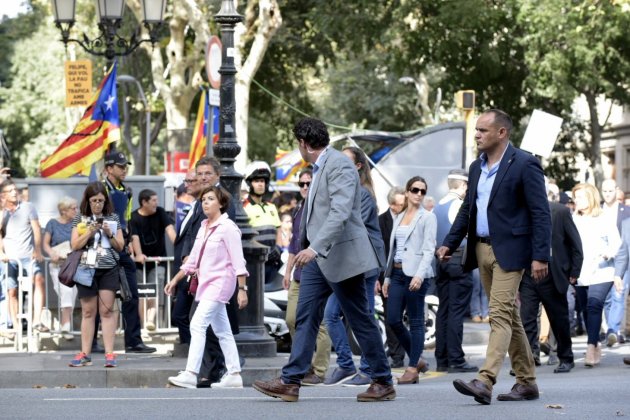 The pro-independence claim wasn't absent from the march either. From sectors of the movement there had been requests to not bring estelades (the pro-independence version of the Catalan flag) or to at least add a black mourning ribbon. However, in the first section of the demonstration large pro-independence flags were perfectly visible. There were also Spanish symbols, some distributed from stands run by the PP (People's Party). Similarly Sociedad Civil Catalana (Catalan Civil Society) took part with their placard.

The Small Gardens of Gracia

The march started at 6pm from the Jardinets de Gràcia (Small Gardens of Gracia), heading towards plaça Catalunya along passeig de Gràcia. To avoid problems over the presence of the king and the Spanish government, it had been decided to concede the head of the protest to the security forces and emergency services who responded to the attacks, along with taxi drivers, hoteliers, residents and business owners. Together, they held a single banner reading No Tinc Por. 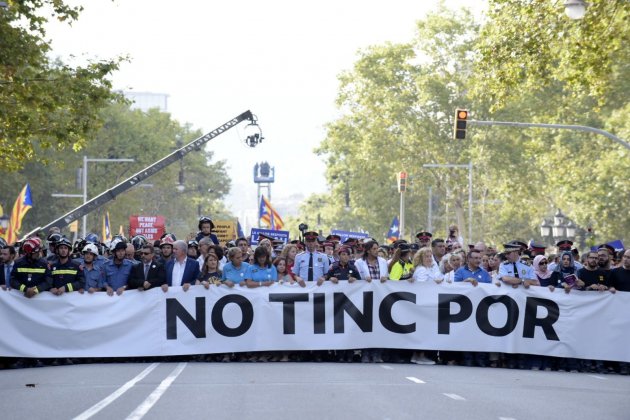 On the following row were the politicians, led by the king, Rajoy and Puigdemont with their respective governments and the mayor of Barcelona, as well as the presidents of the autonomous communities and representatives of national and Catalan parties.

This was the first time that the king has taken part in a demonstration since he ascended to the throne. He attended the one held following the 2004 Madrid bombings alongside his sisters the princesses, but he was at that time the heir apparent. The monarch, who was in plaça Catalunya a week ago for the minute's silence after the attacks, didn't confirm his attendance today until Thursday evening. 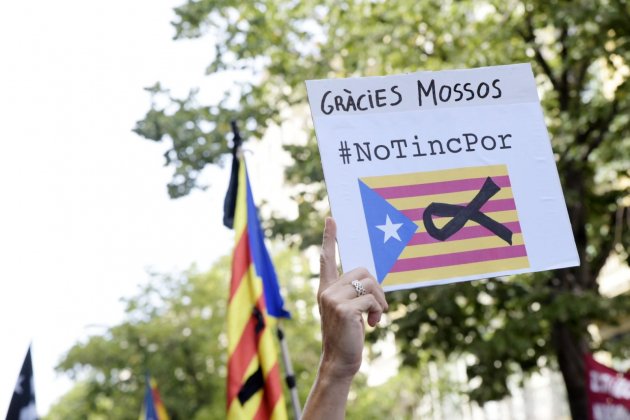 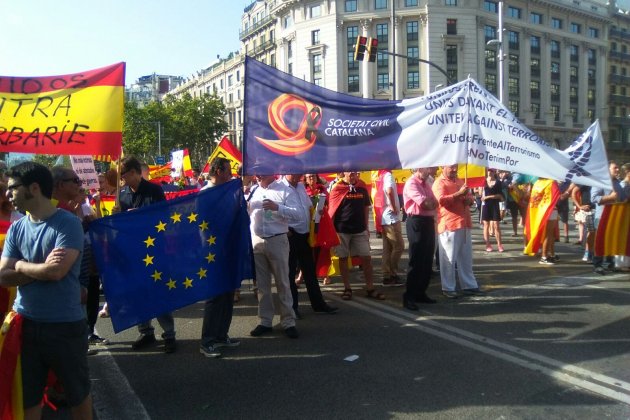 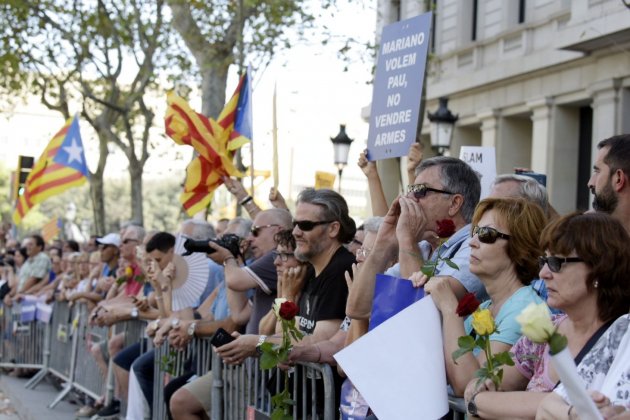 The event was closed with the reading of a manifesto by the actor Rosa Maria Sardà and Míriam Hatibi, spokesperson for the Ibn Battuta foundation. "We've shown that we're a supportive society with the determination to live in peace and as a community," said the text. "We will not consent for terrorism to humilliate us nor beat us. Because when they hit, they will find us more united than ever in the incorruptible defence of Liberty and Democracy from our diversity of cultures and beliefs."

This was followed by poems about the Rambla by Federico García Lorca and Josep Maria de Sagarra as well as a performance of "El cant dels ocells" ("The song of the birds", a traditional Catalan tune) by Guillem Gràcia and Peter Thiemann, whilst the screen projected images of the public after the attacks. 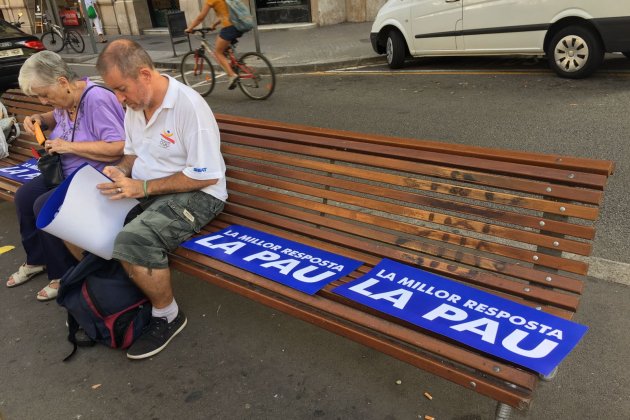 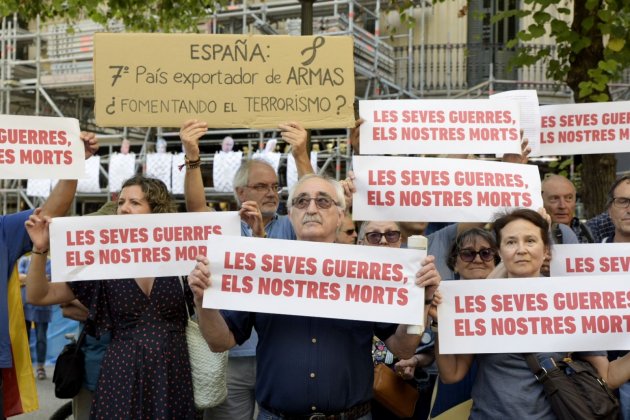 The background of the stage was an image created by Frederic Amat and the floral decoration was by the Guild of Florists of Barcelona. The Guild has also handed out 50,000 red, 10,000 yellow and 10,000 white roses to participants, the colours of Barcelona, at 18 distribution points around the city run by volunteers from Òmnium Cultural, an association that promotes Catalan language, culture and independence, and the Catalan National Assembly. 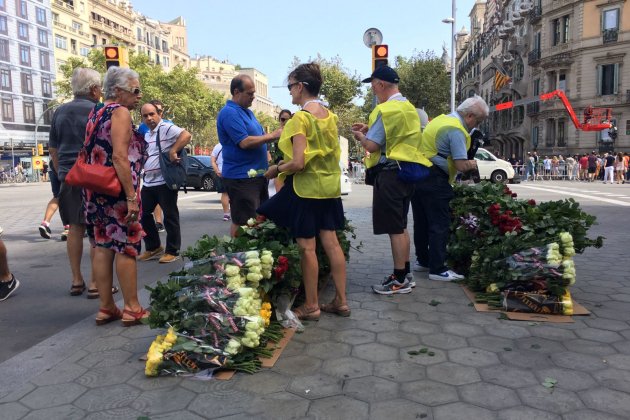 Ripoll, the town in northern Catalonia where the terrorists lived, will also take to the streets this afternoon. The event was very moving and included a contribution from the sister of Moussa Oukabir, one of the terrorists who died in Cambrils.

The central demonstration in Barcelona was preceded by other events in rejection of the attacks held around the country.

In the Catalan cities of Lleida, Reus and Tortosa, the local Islamic communities have demonstrated in the streets this Saturday. In Mollerussa, the square in front of the town hall was the scene of a gathering called by the Board of Muslims of the Pla d'Urgell county. Around a hundred people attended and observed a minute's silence.

The imam of the mosque of Mollerussa said that the attacks go against the spirit of Islam. "They don't represent us. We're a people of peace," he said. The event was attended by Muslims from around the county holding signs against terrorism.

The Islamic Association of Valls gathered some 400 people in the town's plaça del Pati. The town's imam took part and said that the attackers "don't represent the Muslim religion".

Cambrils, where the second attack took place, also was home to a demonstration this Saturday evening. Around 16,000 people gathered in rejection of terrorism and in homage to the victims under the motto "Tots som Cambrils" ("We're all Cambrils" in Catalan). The march ended at the scene of the attack, where the security forces and emergency services that intervened were recognised.