After 741 days behind bars, Raül Romeva has returned to work. Just after eleven this Monday morning, the foreign minister of the 2017 Catalan government walked out of a windswept Lledoners jail with a beaming smile. His wife, member of the European Parliament Diana Riba (ERC), was waiting for him. Romeva will be acting as an adviser and evaluator on tasks in relation to the peace accords that ended the Bosnian war. Tomorrow, it will be Oriol Junqueras taking that same walk out of the prison.

Last Thursday, the prison treatment board agreed to grant the applications under article 100.2 made by Romeva and Junqueras, a provision which allows prisoners to undertake regular work or volunteer activity outside the prison.

In both cases, the permission is for six hours' leave, three days a week, always between Monday and Friday. They will continue to sleep in their cells every night. Thus, Junqueras and Romeva join Cuixart, Sànchez and Forn, who have already begun work under this provision, as well as Forcadell and Bassa, who have also been granted leave to take care of dependent relatives. In total, seven of the nine jailed pro-independence leaders have now been allocated a work regime under this provision.

Romeva's work will be for a private entity and is closely related to his professional experience. One of the tasks entrusted to him is to recover the historical memory of the Balkans, focusing specifically on the relations of Catalonia and Barcelona with Bosnia-Herzegovina.

During the 1990s Romeva spent time as a UNESCO aide and international observer in Bosnia, part of a long trajectory in international relations, peace and disarmament issues. 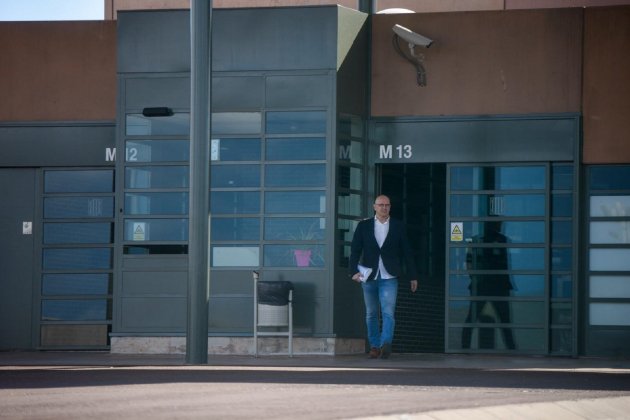 Twenty minutes after Romeva's departure from the central Catalonia prison this Monday morning, he sent a tweet: "First day of work outside Lledoners. Still without liberty, but with the commitment intact. I am continuing and will continue to serve the people; that's what I've always done."

On Tuesday it will be Oriol Junqueras who will start a new routine, which, in his case too, is a return to what he's done in the past: the ERC leader will once again be a university professor, in this case, on the Manresa campus of the University of Vic. This was announced by the university in a press release stating that they had accepted the application lodged by Junqueras, who has a doctorate in the history of economic thought and a degree in modern history.