In the ERC offices at Parliament it was finally time to open a few craft beers. Never in Catalonia's post-Franco era had a presidential candidate needed three voting sessions to be elected by the chamber, just as never in the last decade had a president succeeded in gathering such a large majority. Not since Pasqual Maragall's 2003 investiture had there been an investiture with 74 votes in favour - today, those of the three pro-independence parties ERC (Republican Left), Junts (Together for Catalonia) and the CUP (Popular Unity Candidature). Both of these achievements are clear examples of the resilience of Pere Aragonès, who this Friday at noon was proclaimed the 132nd president of the Generalitat of Catalonia, warmly embraced by his political mentor, the jailed Oriol Junqueras, who wanted to be present for ERC's return to power. The 61 deputies of the opposition parties - PSC, Comuns, Vox, Cs and PP - voted against.

Moments after the investiture vote, euphoria was unleashed in Republican ranks. First, a long standing ovation at the foot of Parliament's ceremonial staircase. And then, private celebration in the offices.

Aragonés' posture in this third round of voting was bathed in a different aura from the first two attempts. This time he knew he would be president and that gave him an air of much more confidence. During his speech to open the debate on Thursday afternoon, his urge was to get to work, with no attempt to hide that he is in a hurry to take the helm. He wants, he says, to govern for all Catalans, even those who do not want independence, to offer them something more than a reasonable life.

The first major challenge that the executive will have is to carry out a reset, to differentiate itself from the previous government and definitively break the dynamic of internal disputes blowing up, day in and day out. Dirty washing, which is always generated, a natural thing to arise in a coalition government, has to be washed at home. 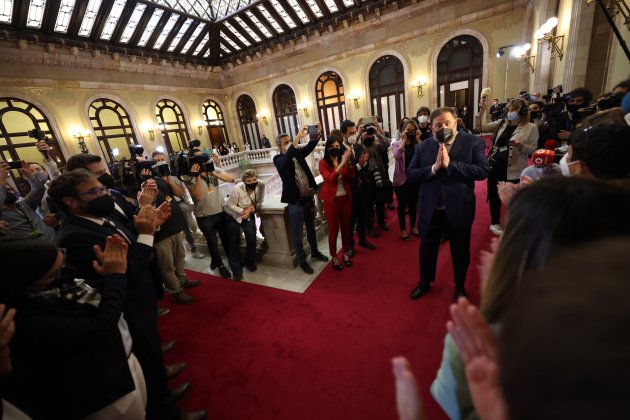 During the debate, both ERC and Junts pledged to work in "unity, loyalty and mutual trust." This was stated by the Junts leader in Parliament, Albert Batet, admitting that the advantage of the agreement signed between the partners is that it generates few "expectations", so that it is easy for it to go "from less to more ". 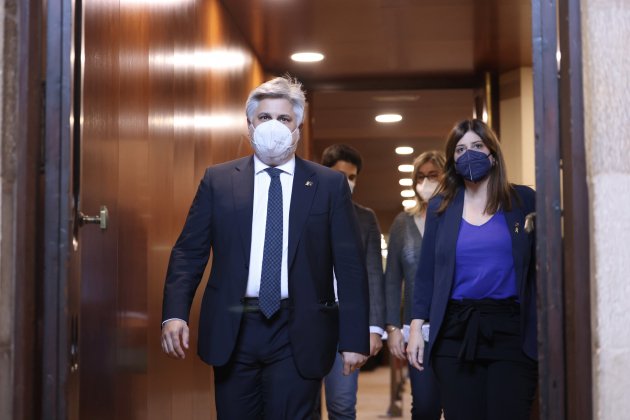 Finishing as the largest pro-independence party in the February 14th elections means that ERC has been given two years by Junts and the CUP to develop its policy of dialogue with Madrid. Aragonès proposes pushing the Spanish state to "make the referendum inevitable." And he intends to do so by moving on a path that mirrors the Scottish route. To achieve this, the Republicans consider it essential that the entire independence movement has a single voice, which they want to unite in the National Accord for Self-Determination and an Amnesty.

At the same time, Aragonès has set himself the goal of "shaking up" Catalonia with four revolutions: social, green, feminist and democratic. And in these areas he aspires to have a larger majority than the 74 pro-independence seats.

In fact, the struggle for social justice is one of the most important chapters in the document agreed upon with the CUP. The radical left party's Dolors Sabater has warned Aragonès that her group's support for the investiture "is not a blank cheque", and that he must prove that his compliance with the deal from the outset. The fact that some of the points which ERC committed to with the CUP are not included in the government agreement with Junts generates suspicion among the anti-capitalists. For example, in relation to the withdrawl of riot police from policing of home evictions, and the municipalization of public services. "We will monitor every step every day to ensure that the agreements are complied with," said Carles Riera.

At the same time, like Junts, the CUP group demands that Aragonès opt for the path of confrontation on the road to independence.

The Comuns, from the wings

The broad church whose praises ERC has sung since the election campaign has not materialised. En Comú Podem did not step inside because they do not want to have anything to do with Junts. However, Aragonès continues to send winks to them, inviting them to join the majority of those who defend self-determination and an amnesty, an invitation also issued by the CUP. The new president urged the alternative leftists to make a "gesture of confidence and generosity" and to abstain in the vote.

However, the group led by Jèssica Albiach voted 'no' once again because "this government is not good for Catalonia". However, they will remain on the lookout convinced that the ERC-Junts marriage has "built-in obsolescence": for now, the Comuns will watch from the wings, without closing the door to future alliances, as they entered into with Quim Torra's government budget. 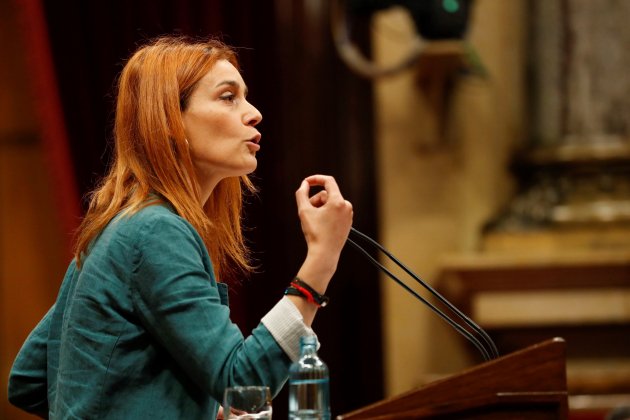 Albiach in the chamber. / EFE

The speakers who began this investiture debate on Thursday served to open a gap between two blocs. The new leader of the opposition, the Catalan Socialist (PSC) Salvador Illa, defined himself as as a Tarradellista - the exiled Catalan leader Josep Tarradellas who returned to be president in 1977 was general secretary of ERC - and Illa decided to adopt a very different tone from that of his predecessor, Inés Arrimadas. During his speech, he offered help to Aragonès in everything related to day-to-day management, the exit from the Covid crisis and the distribution of the European funds. An attitude that the ERC leader appreciated. On the other hand, the brick wall between the two sides on national and independence issues remains as strong as ever. The PSC categorically denies both the right to self-determination and an amnesty, which are the only two points that the Catalan government wants to bring to the dialogue table with the Pedro Sánchez government. 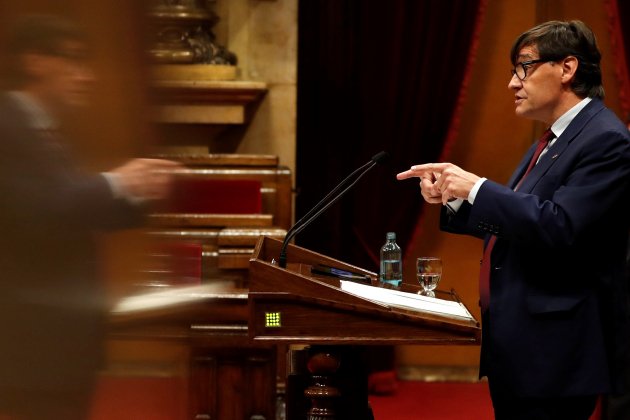 Illa during his reply to Aragonès / EFE

Cs and the PP, in the shadow of Vox

On the right side of the chamber, Ciudadanos and the Popular Party are having to dedicate great efforts to avoid being swallowed up by far-right Vox, which has more MPs than the PP and Cs put together. In many moments of his speech, Vox spokesperson Ignacio Garriga resembled former Cs head Albert Rivera, making his own the expression xiringuitos separatistes - "shady separatist scams". Beyond that, he spouted on about the migrant conflict in Ceuta. A subject that Aragonès then replied on, announcing that his government will welcome the Moroccan minors that would correspond to Catalonia. A declaration of intent. 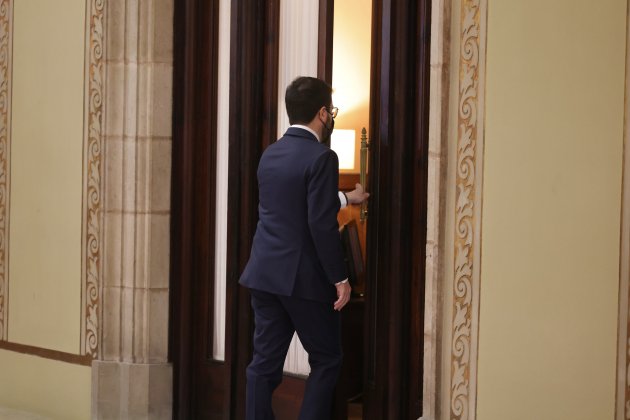 More than three months after the elections, Catalonia finally has a president, who will take his oath of office on Monday evening​. From there on, ERC will have two years to prove to Junts and the CUP that the commitment to dialogue is not a dead end. If after that deadline there is no trace of an agreed referendum on the horizon, more changes of direction will beckon.

New Catalan government The investiture of Aragonès as Catalan president: here's how it will happen Marina Fernàndez Torné