The investiture of Aragonès as Catalan president: here's how it will happen

Eighty years later, the Catalan Republican Left (ERC) will once again hold the presidency of the Generalitat of Catalonia. The wait has been eternal, but finally, fourteen weeks after the Catalan elections, Pere Aragonès will be proclaimed 132nd president this Friday, May 21st. The plenary session, as the candidate and the speaker of parliament have agreed, will start this Thursday at 4pm with the candidature presentation by the ERC leader. The next day at noon he will - as now seems certain, following confirmation by Junts of their votes - be voted in by an absolute majority. And on Monday he will take the oath of office as president. All this as long as there are no last-minute plot twists, not at all expected but never able to be completely ruled out in Catalan politics.

The candidate will present his government programme in the chamber, which will be the result of the agreement signed with Together for Catalonia (Junts) to repeat the coalition, and the pact also agreed with the Popular Unity Candidature (CUP) to obtain their support for the investiture. Aragonès will then listen to the responses of each of the leaders of the other parliamentary groups, and after each one, will respond himself.

Aragonès has 74 committed votes, a comfortable absolute majority that will allow him to emerge victorious on the first ballot. Not since Pasqual Maragall in 2003 has a president of the Generalitat obtained such a broad endorsement. The other side of the coin is that the ERC leader will also be noted in the history books as the first to have been subject to the penance of two failed investiture votes before reaching the presidency. At the end of March, he stumbled twice in a row due to the abstention of Junts.

Junqueras, present for the swearing-in

The intention of the future president, the first from the Republican Left since Catalan self-government was restored in 1977, is to take office as soon as he can. Sources close to Aragonès confirm to ElNacional.cat the presence of the party's president, Oriol Junqueras, who will ask for prison leave. The event, say ERC officials, will be held on Monday in the late afternoon. However, to confirm this, it will be necessary to pass through the bureaucratic formalities.

Depending on the king and the state gazette

The timing for the appointment of the Republican depends on the Spanish king, who has to officially appoint the new president, in response to a proposal made by the speaker of parliament. Thus, Laura Borràs is required to inform the monarch when a candidate has been successful in the investiture vote. During the era of Juan Carlos I, this procedure was carried out in person. The speaker of the Catalan chamber traveled to the Zarzuela palace in Madrid. When Carme Forcadell assumed the speaker's position in Parliament, with Felipe VI on the throne, the new monarch refused to receive her. The communication was given in writing, which, it must be said, speeds things up.

The next step, after the president formally takes up the post, will be to appoint the government. The idea is that the decree with the name of the new ministers will be made official in the middle of next week, so that by next Thursday they too can formally accept their roles and start working, with the holding of the first meeting of the new cabinet that day.

Until the king's statement appointing the new president is published in the official Spanish and Catalan gazettes, Aragonès cannot take possession of his position in the Palau de la Generalitat. 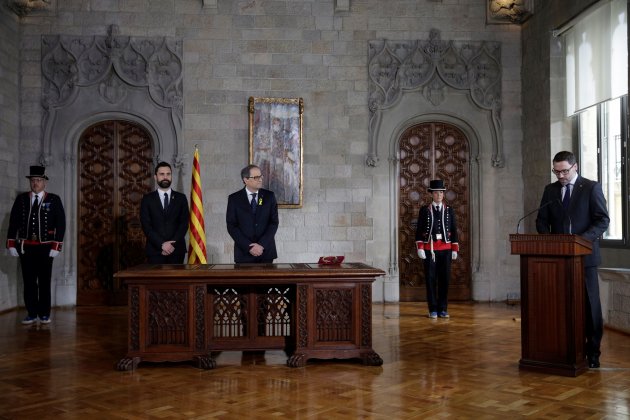 Image of Quim Torra taking possession of the Catalan presidency in 2018. / EFE

In 2018, with the government of the Generalitat controlled directly from Madrid under the punitive Article 155, Quim Torra opted for a sober and austere celebration, in line with the moment. The only guests were his family and the speaker of parliament, Roger Torrent. In his brief inauguration speech, Torra avoided any mention of the Spanish Constitution. To demonstrate the exceptionality of the situation, with Puigdemont in exile, Torra decided that the president's medal would not be hung around his neck, an act usually performed by the outgoing president.

One of the questions is precisely who will perform this protocol role for Pere Aragonès. Sources close to the new presidency say that the act being organized will have more pomp than that of three years ago. Of course, it will respect the essential security measures required by the pandemic.

In the main image, Aragonès arrives at Parliament. / S. Alcazar