Three days of absolute discretion, a self-imposed silence on both sides and secrecy even from figures in their own parties. This was the recipe that ended up cleansing the poisoned negotiation between the Republican Left (ERC) and Together for Catalonia (Junts). After two failed investiture votes, weeks of blockage, ignored ultimatums and an arrival at the cliff-edge of having to repeat elections, the two major political forces of Catalan independence have saved the legislature with an agreement in extremis to vote ERC's Pere Aragonès in as new president and repeat their coalition government. Aragonès himself announced the details of the pact, in parallel with the general secretary of Junts, Jordi Sànchez. Both agreed to define it as a “good agreement,” with no losers. The two leaders were locked together in talks for hours this weekend to untangle the situation, aware that a "repeat election would put the pro-independence majority at risk." "We will not work only for the 52%, but we will not disappoint the 52%," stressed the Junts leader, while the future president highlighted the commitment to "mutual loyalty."

Pere Aragonès: "We have an understanding and an accord to immediately put into action a government that will be on the people's side."

Finally, the major hurdle has been cleared away, that of how the pro-independence roadmap is to be drawn. "We undertake to make a firm commitment to dialogue and negotiation, being well aware that we are defending the need for a civic and peaceful confrontation to force the state," Aragonés said. And Sànchez added that Junts feels "reflected" in this agreement, because it "accommodates the two majority views of independence". Translated: two years in the dialogue table preparing in parallel a new unilateral referendum in case the state does not respond on the proposals for amnesty and self-determination.

The Republicans have yielded at key points in the governing structure in return for guaranteeing what party sources have acknowledged was "the great obsession", removing any hint of subordination of the future 132nd president to the exile body, the Council for the Republic, for which a reformulation is pending, and which will work “in coordination and in parallel” with the new political hierachy of the independence process. This new space for strategic coordination will also ensure, as far as possible, unity of action among the pro-independence parties in Madrid - in important matters such as the Spanish government budget - as requested by Junts. However, if no consensus is reached, there will be freedom to adopt different positions. 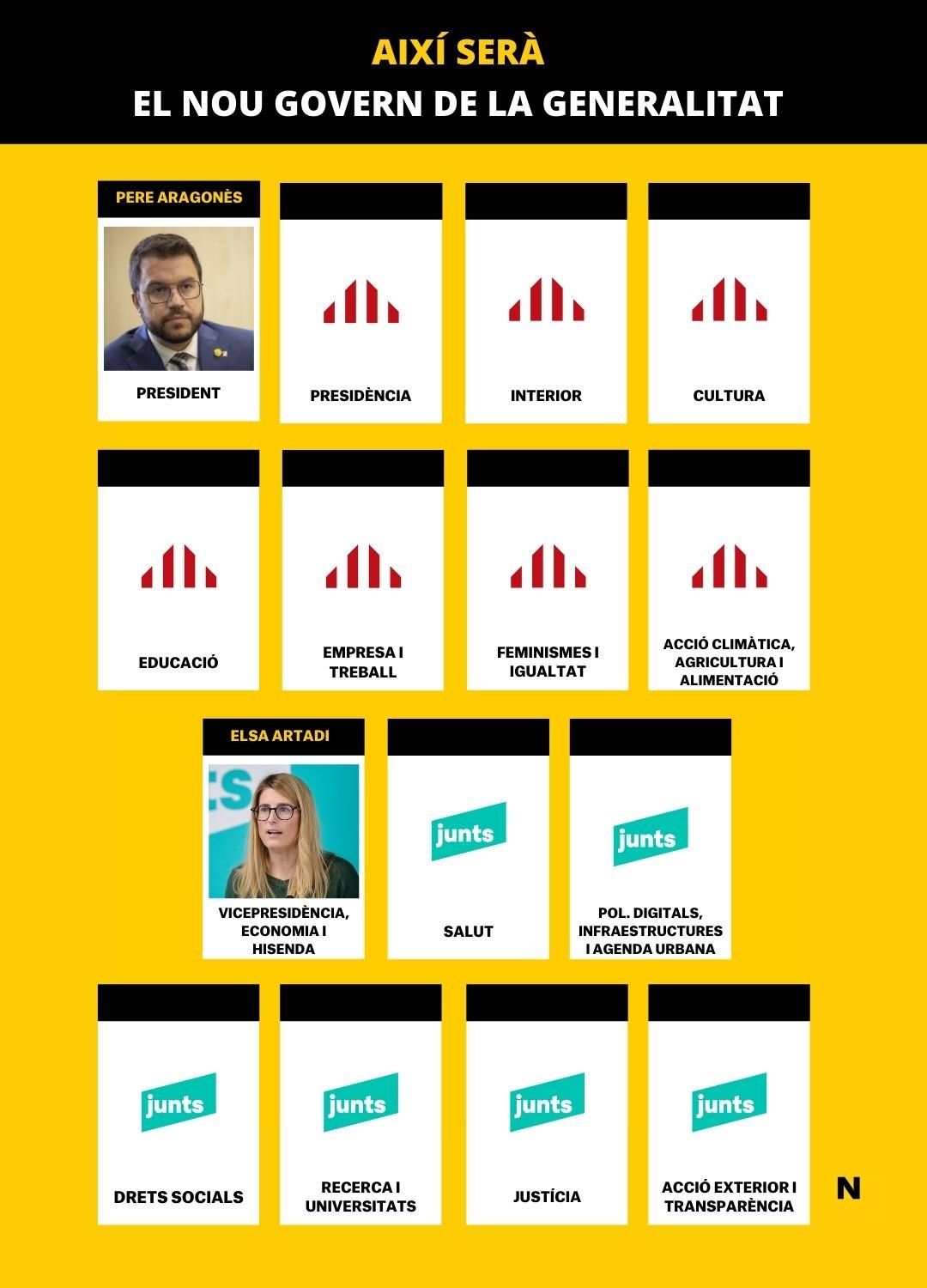 Division of portfolios among the two parties in the new Catalan government.

The document, which is about a hundred pages long, also includes the distribution of portfolios in the new government. Among the outstanding changes just decided, that ERC will lead the Interior ministry and Junts will head Health. A fifty-fifty split has been of the new government's 14 cabinet places - one more than it had up till now. Three new portfolios are created - Feminisms, Climate Action and Universities - and others are merged - such as Business and Labour, and Territory and Digital Policies. In relation to the ministries, there was contention on who should manage the EU NextGeneration funds. The solution has been to create an interdepartmental commission in which all ministers will participate and Aragonès will have a casting vote.

Pending the final validation by the party membership of Junts - and the national council of ERC - all indications are that the investiture session of Parliament will be held this Thursday or at the latest on Friday, with the expectation that Aragonès will be proclaimed president on the first ballot, thanks to the 33 votes of ERC, the 32 of Junts and the 9 of the CUP. However, the anti-capitalists have yet to confirm whether they consider that they should re-consult their membership in an assembly. ERC sources are confident that it will not be necessary, because the deal "respects" the pact already made with the CUP, in the words of Aragonès himself. In this regard, the ERC head emphasized the desire to promote progressive and transformative policies.

Once invested as president, Aragonès will have five days to take possession of his office. After more than half a year as acting president, he will then finally have full presidential functions.

Council for the Republic's "guidance"

The three-month tug-of-war between the future government partners has been a veritable roller coaster ride. It all started badly after the Republicans' decision to start their search for allies by talking to the CUP. Junts interpreted this as disdain.

In the early stages of negotiations, a great obstacle appeared which blocked dialogue and perpetuated the process: how to unify the respective patrty strategies for achieving independence. The exile body led by Carles Puigdemont, the Council for the Republic, eventually became the focus of discord. ERC publicly protested that Junts had insisted on giving "guidance" to the future president through the Waterloo-based body, something that Puigdemont and his colleagues have always denied. Finally, the obstacle has been resolved via a commitment to create "collegiate and strategic decision-making bodies" but always "respecting the weight of the presidency of the Generalitat."

Last Saturday, Aragonés wanted to change the approach. ERC had already allowed the time limit they had imposed on Junts to slip by, having called for an initial accord to be reached before May 1st. At that point, a summit at Lledoners prison had led them to believe that the pact was about to crystallise, but again, the situation became more complicated. The ERC candidate then announced that he was abandoning the option of a coalition government and taking the alternative route of a solo ERC minority government. Later, and after his investiture as president, ERC would see if Junts, the CUP or the Comuns could be integrated into its executive. That meant a change of gear. And it ended up precipitating matters.

A six-way summit between ERC, Junts, the CUP, the ANC, Òmnium Cultural and the Council for the Republic, and a subsequent three-way meeting between the three pro-independence parties, pushed towards a deal. An agreement of minimums, under which they undertook to separate the stumbling block - the independence roadmap - from the negotiation on forming a government. A point that was basically a concession from Junts. However, at that point ERC continued to close the door on a coalition government, while Junts rejected the possibility of lending the required votes to Aragonès without being part of the executive.

One of the central aspects of the agreement between ERC and Junts is the establishment of mechanisms to restore and preserve the damaged trust between the two. In fact, the area of coordination was one of the first discussion areas resolved by the negotiating teams, aware that given the experience of the Torra government, it is essential to anticipate possible flare-ups.

To this end, several coordination spaces have been created at different levels that will meet periodically to monitor the day-to-day, both in Parliament and in the government, as well as between the parties.