The migrants of Ceuta, from the sea to the border: "We just want to work"

A young Moroccan man is swimming from the far side of the border fence at Spain's North African enclave of Ceuta. In the sea off Tarajal Beach, he gasps for breath and is having trouble staying afloat, prompting a Red Cross worker to approach and throw him a life jacket. With that he manages to come ashore, on a breakwater, where he is intercepted by a pair of Spanish Civil Guards. The youth pulls out a very tightly-wrapped bundle, which he says is a cell phone. But the officers ask him if it’s hashish. Until they discover that it is indeed a telephone. He pleads with them, in French, that "all he wants is to work in Spain." He can't carry on with his current life anymore. He lies down on the ground. The cops, speaking rather precarious English, tell him to come with them. They take him to the border with Morocco. He is one more "hot return": direct from the water to the border.

Less than ten minutes have passed since a Red Cross boat approached another boy on Tarajal Beach. He is picked up by other volunteers from the association, who have to resuscitate him because he was drowning. He finally coughs out the water and regains consciousness. Soldiers present on the Ceuta beach then take him to the border too. He disappears from sight and that's the last that is known of him. 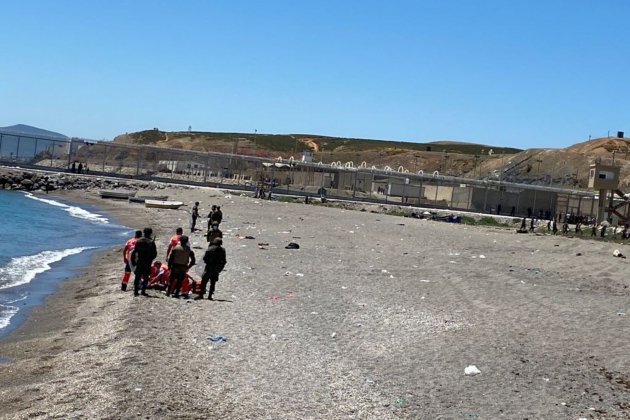 Civil Guard and Red Cross officers resuscitating a person on Tarajal beach in Ceuta. In the background, the border fence. / Nicolás Tomás

This Wednesday, the rate of migrant arrivals has slowed considerably, after Morocco decided to close its borders, the same floodgates that it had opened in a diplomatically-motivated move. But there are some who are continuing to risk their lives to try and obtain a better one. And they end up being deported by the fast-track route. On the other side of the frontier, the crowds have moved away in the face of deterrent shots fired by the Spanish police. There are many young migrants roaming all over the autonomous Spanish city, doing little more than asking for food. Many have directly surrendered themselves, to return to Morocco voluntarily. Others are in industrial buildings in conditions that are precarious to say the least. The pressure has dropped in Ceuta, but the humanitarian drama has not gone away. It has always been there.

Organizations working on the ground, such as the Red Cross, admit that they have rarely encountered a situation like that of the last few days. Entire families have arrived, in a worse than deplorable state, by land and by sea. And a policy of mass expulsions is being put into action. This Wednesday at noon, the Spanish interior ministry reported that already 5,600 people had "returned", from the more than 8,000 who have entered irregularly this week.

The government of Pedro Sánchez that was once sorely critical of the hot returns carried out by the Mariano Rajoy executive is now employing the same practice on an industrial scale. The policy was backed last autumn by the Spanish Constitutional Court. The European Court of Human Rights also endorsed it. But the Council of Europe, as well as many human rights organizations, has recently questioned this response. The Venice Commission has argued that Spanish police and Civil Guards "should not proceed with rejection of a person at the border if they see that the person has compelling reasons not to go though ordinary procedures for seeking asylum."

The Tarajal massacre, in memory

This beach at Tarajal has already experienced very tragic scenes in the past. Such as the massacre of 2014. Fifteen immigrants drowned trying to swim to this beach in Ceuta. Instead of rescuing them, Civil Guard officers responded by firing rubber bullets and throwing smoke canisters. The case reached the courts, but was dropped shortly thereafter. Tarajal is the symbol of a daily reality in this part of the Mediterranean. In 2016, Amnesty International Spain published a report (link in Spanish) on the situation in Ceuta and Melilla, referring to the enclaves as "territories where there are no rights for migrants and refugees".