Incoming Catalan president looks to Scotland, pushing for a "UK approach" by Spain

His characteristic sobriety concealed the understandable nerves before today's big moment. Pere Aragonès stepped out onto the playing field to present his third inauguration speech with the certainty that this time he will be president. This occasion will indeed be the definitive one. In less than 24 hours, he will be proclaimed president of the Generalitat of Catalonia, with the votes of all 74 pro-independence deputies. The future president got quickly to the point. “I’ll be brief, we all have a lot of work to do,” he noted. He had already outlined the government programme at the end of March, when the abstention by Together for Catalonia (Junts) blocked his passage to the presidency. Today he recalled a few broad strokes of that, and took the opportunity to express "gratitude for the patience of an exhausted citizenry with whom we are in debt to regain their trust." Two key ideas from his speech: a call for Spain to do what the United Kingdom did with Scotland in 2014 and a commitment to "shake up" Catalonia with an avalanche of progressive and left-wing legislation.

"For the first time in the 21st century, Catalonia will have a pro-independence and left-wing president," he said at the beginning of his speech. And based on this statement he continued to set out his proposal for Catalans. "On the one hand, we will defeat Covid that has taken so many people away and we will bring the country out of the crisis, and on the other we will move towards the Catalan Republic" asserted Aragonés in one of the phrases that best sums up the commitment of his party the Republican Left (ERC) to reconcile progress towards independence with general government management. In this regard, he remarked that the agreement with Junts complements what was agreed earlier with the CUP (Popular Unity Candidature). And he also reached out to the Comuns (En Comú Podem) for the umpteenth time. In fact, he made it clear that he would not rest on his laurels with the support of the absolute majority that will vote him as president, but rather, that he aspires to bring even more political forces into the fold. 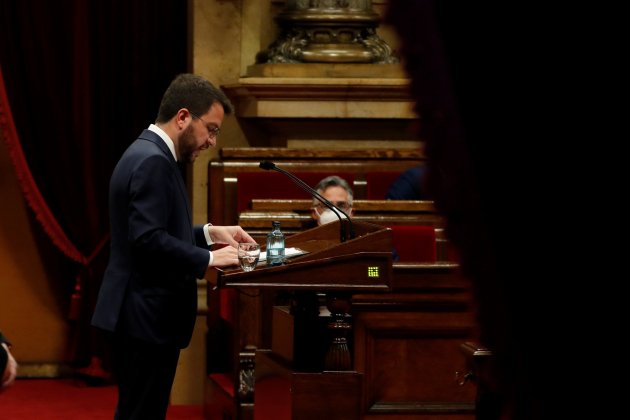 Aragonès during his speech in the chamber. / EFE

A referendum agreed with the state

In the section of his speech dedicated to how he plans to continue towards "culminating independence", Aragonès focused on the need to "force" Spain to abandon repression and adopt a new attitude to the Catalan issue. "This is my obsession. Overcoming the current blockage and resolving once and for all the conflict between Catalonia and Spain." He stressed that "it is urgent and imperative to change the dynamic" so that the independence movement can "recover the initiative".

To achieve this, he pledged to push for "the National Accord for Self-Determination and Amnesty to defend the need for a civic and peaceful confrontation to force the state to assume the reality that it has up till now denied." "I want to do the same as Scotland and I would like the Spanish state to behave as the United Kingdom did in 2014," he admitted, inviting the Pedro Sánchez government to make a proposal to "seduce Catalans" in a referendum on independence, "instead of systematically denying the right to decide". Specifically, he called on Madrid to commit itself to offering "an alternative project to independence that goes beyond being left with a cut-down autonomy that has long been too small for us". No mention, however, of the concept embat democràtic - "democratic barrage" - used in the documents agreed with Junts and the CUP.

In any case, he did celebrate that the pro-independence forces "are beginning to have a shared diagnosis of where we are and what needs to be done from now on." And that happens to allow a margin for dialogue with the Spanish state. 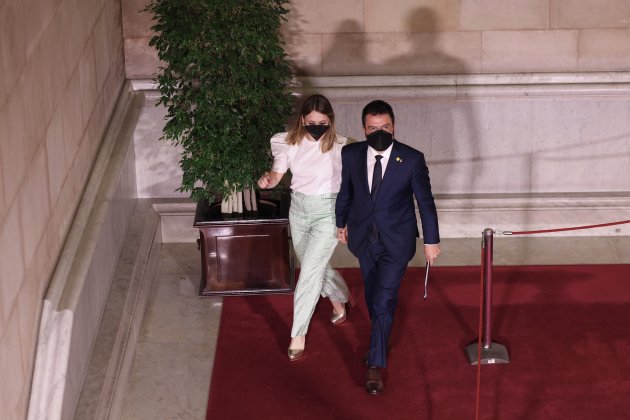 Beyond the specific steps to materialize independence, Aragonès devoted much of his appearance today to defending his commitment to subject Catalonia to "a shake-up", with "changes in form and substance" based on social justice to "position Catalonia as a progressive country of reference at European level".

He revealed a whole battery of proposed laws, about twenty, to carry out "four revolutions." The first, social - to guarantee home, work, health and education - and the other three, feminist, green and democratic. "The only limit we must set is the popular will of the citizens of Catalonia," he said.

Among the promises of the future president, a 700 million social rescue plan, free nursery schools, a mental health plan, a pilot programme for universal basic income and a national pact for an ecological transition.

The dance of ministerial names

With the doubts about investiture finally resolved, the speculation of bystanders is now focused on who will be in the new cabinet. In this regard, the news bombshell was offered on Wednesday by Elsa Artadi, who was everyone's bet for the position of vice president and who has ruled herself out, to remain at the Barcelona city council. Today, in Parliament, she wore a mask with the logo of the Barcelona municipal body. Of the seven ministers that ERC will have, four will be women. One of them, for sure, will be Laura Vilagrà in the ministry of the presidency. Also likely are Ester Capella - justice minister up till now - the deputy Jen Díaz - who could make the transition to the equality and feminism roles if Alba Vergès leaves the cabinet in the end - and the current head of agriculture, Teresa Jordà, who could stay at the helm of this ministry, now expanded into the climate action area.

On the male side, it is assumed that Roger Torrent has a place reserved, so much so that he has been placed in multiple possible portfolios, from interior to culture, although he could also fit into education, given that most likely Josep Bargalló will not continue. ERC will also bring in independent figures, as is the case of Joan Ignasi Elena, a lawyer who served as a spokesperson for ERC prisoners and was once coordinator of the National Pact for the Referendum.

In the main image, Aragonese in Parliament. / S. Alcazar