Junqueras backs 4-party executive: "We don't want to choose between Junts and Comuns"

The president of ERC, Oriol Junqueras, has called on Junts, the CUP and the Comuns to be generous and responsible and to stop the "vetoes" so a broad government can be formed. These four Catalan political parties are in the depths of intense negotiations to reach an accord on forming a government, but the problem is that there are parties that refuse to be part of the same government - as is the case with Junts and the Comuns.

In an interview with Catalunya Ràdio, the ERC leader called on the parties to put aside their "personal interests" and focus on "party interests" to make it possible for the negotiations to end in a stable legislature. “Let's put the country ahead of the mutually-exclusive vetoes of different groups,” he stressed. "We don’t want to choose between Junts and Comuns. We must be able to form a government among all of us."

Junqueras asserted once again that he and the other pro-independence political prisoners are imprisoned for political reasons, recalling that "the Spanish penal code says that holding a referendum is not a crime." According to the Republican Left politician, "the state cannot beat us at the polls, and that is why it practices repression."

Junqueras made this affirmation the day after a penitentiary surveillance court decided to maintain the Level 3 open prison regime for all but one of the pro-independence politicians imprisoned in Lledoners - and the exception, Joaquim Forn, has now been granted the same status this Thursday. Thus, with Carme Forcadell and Dolors Bassa having already received an identical ruling on Tuesday, it seems likely that all nine prisoners will be able to continue their day and weekend leave from prison, until the substance of the prosecutors' appeal is eventually considered.

The Hasél protests and riots

With nine nights in a row of protests in support of imprisoned rapper Pablo Hasél in different parts of Catalonia - especially Barcelona - and many of them ending in looting of shops and police baton charges, Junqueras expressed his concern about the protests, although he added that "the situation is difficult".

"Young people have economic, social and political concerns, and this is exacerbated by situations such as where someone is locked in jail for their song lyrics," the ERC president said, adding, however, that "the country's problems are not solved by looting shops". 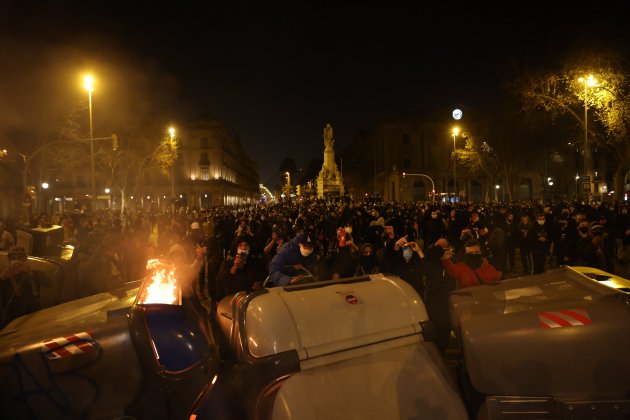 Protests in Barcelona over the imprisonment of Pablo Hasél / Sergi Alcázar

At the very least, he stated, "we must also put our foot down when there are law and order actions that are inappropriate to an ethical and modern police force. A disproportionate use of force cannot be tolerated. And neither could a situation where the Mossos police did nothing in the face of a crime."

Relationship with the Socialists

Oriol Junqueras said that he had not spoken to the Socialist candidate in the elections, Salvador Illa, since the elections, and justified this by saying that "the winners of the elections are those who are able to form a government". Junqueras made the comment when he had been reminded that the Socialists won more votes than ERC on election day.

Similarly, the ERC leader clarified that "the Socialists have done everything possible to keep us in prison" and therefore "cannot contribute to good government."