Oriol Junqueras is returning to university. After a few years far away from the classrooms and 852 days in prison, the leader of the Catalan Republican Left (ERC) left this morning from Lledoners prison, in line with the provisions of article 100.2 of the prison regulations, to re-enter academic life. From this Tuesday onwards he will be working at the Manresa campus of Catalonia's University of Vic, just five kilometres from the penitentiary, for three days every week and six hours a day. When the six hours are up, he has to return to his cell.

With a steady pace and looking content, the pro-independence leader left Lledoners just after eleven o'clock in the morning. Although a few people close to him and some ERC officials had come to meet him, he walked out of the prison alone and gave a smile at the large media contingent that had turned out for him. A "Good morning everyone, are you all well?" was the only phrase he uttered. Work leave doesn't allow him to make statements to the press.

A course on the history of thought

On arrival at the university campus in Manresa, Junqueras was welcomed by the vice-chancellor, Sílvia Mas, while about seventy students, teachers and well-wishers received him with an ovation. The ERC leader, who has a doctorate in economic thought and a degree in modern history, will teach a continuing education course on the history of thought.

Translation:
"Teaching and learning. Always. And thanks to everyone for your support, I love you!"
"Thanks to all the students for the reception!" — Oriol Junqueras

On his first day at the job, Junqueras began to lay the groundwork and prepare the proposed programme for his course, which is likely to begin after Easter, according to the centre. Until then, the 2017 Catalan vice president will have his own office and will begin shaping the classes he will teach, and defining the student profile for the course. 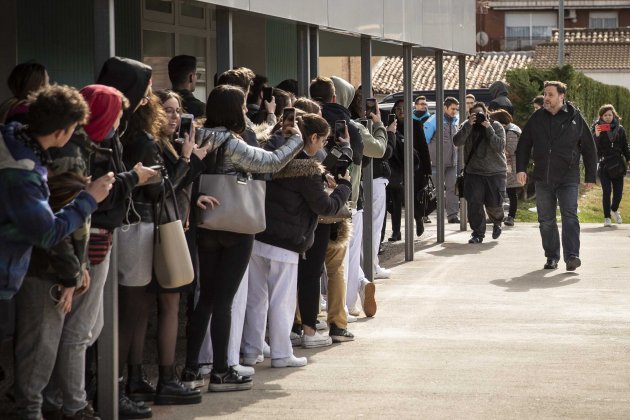 The type of course that Junqueras will teach will not be part of any degree, but rather, will be open to anyone who wants to sign up. However, it may have a defined prerequisite in order to limit the demand if it proves too popular. Since it became known that the former vice president would be teaching at the university, the campus has registered strong interest in the course, through phone calls and visits to the centre requesting information, according to the vice chancellor.

Among the students, there is widespread excitement about the presence of Junqueras at the university, but there are also those who don't even know who he is, since at this centre 30% of the students are French and some have little knowledge of the independence process and the conflict between Catalonia and Spain. However, there is broad acceptance of his presence and academic incorporation to the university.

Despite the good vibrations of the first day, Spanish public prosecutors are already closely examining whether the employment of the pro-independence leader is compatible with the 13-year sentence that disqualifies Junqueras from holding public office, after the unionist group Convivencia Cívica announced that the foundation which has hired him, despite being a private university, has links with the public sector. Prosecutors have already argued against applying article 100.2 to some of his fellow defendants from the Supreme Court independence trial.

With this leave permission, Junqueras joins others in beginning a regular work leave regime: Raül Romeva, who left prison for the first time on Monday, as well as Jordi Cuixart, Jordi Sànchez and Joaquim Forn, who have already been working outside the prison for days, either in specific jobs or as social assistance volunteers; and, in the cases of Carme Forcadell and Dolors Bassa, providing care to elderly relatives. All of them, however, must return to the cell daily to sleep.

Junqueras was sentenced to 13 years in prison for offences of sedition and misuse of public funds in connection with the organization of the referendum on 1st October 2017. Since 2nd November 2017 he has been imprisoned. Up to now, he had only left prison during the 4-month trial last year, as well as two specific trips: one last May, to be sworn in as a member of the Spanish Congress and take part in its first parliamentary session (he was subsequently suspended from his seat); the second, to appear before the Catalan Parliament's investigative commission on article 155, on 28th January.