The Spanish route of Covid-19: study shows how virus spread radially from Madrid

The spread of coronavirus across Spain was essentially radial: the major source of contagion was in Madrid and as people in the capital travelled out across Spain, they took the virus with them. This emerges from a study published by researchers at the University of the Balearic Islands, in conjunction with the Swiss-based big data firm Kido Dynamics, which compares the spread of the coronavirus with the typical dynamics of travel in Spain.

Images from mid-March of dense traffic leaving Madrid on the eve of Spain's lockdown.

The study demonstrates the strong correlation between mobility in Spain and mortality caused by Covid-19. Specifically, the authors - Mattia Mazzoli, David Mateo, Alberto Hernando, Sandro Meloni and Jose Javier Ramasco - compared the number of journeys between Madrid, which they consider the main focus of the coronavirus in Spain, and the rest of the country, divided into provinces for their study purposes. For each province the peak in deaths due to Covid-19 was compared with the number of people who travelled between Madrid and the province in the week before the first cases in that province, and the result was a clear positive correlation: according to the study, 76% of the peak mortality figure for each province is explained by the mobility between that province and Madrid and its ratio to the size of the local population. This is not the only cause of the distribution of Covid-19 in Spain, say the authors, but it is the factor with by far the greatest weighting. 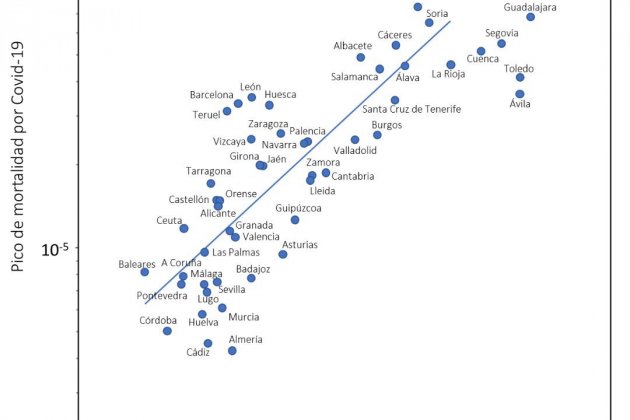 Correlation of Covid-19 mortality peak (y-axis) with the number of visitors per capita between Madrid and each province (x-axis) in the week before Spain's state of alarm. Source: report on the study published in Naukas.com

The study asserts in a typical week like the first week of March 2020, about 6,000 Madrid residents visited the province of Soria and in parallel about 5,200 residents of Soria visited Madrid, almost 13% of the province's relatively sparse population. At this time, although coronavirus case numbers in Spain were rising and the first deaths occurred, the state of alarm had not yet been declared and mobility behaviour was largely normal. In that week, 25,000 people from Madrid visited Barcelona and 37,000 residents of Barcelona visited Madrid, but this latter figures represents only 1% of the population of Barcelona province.

These visitors may have been residents of other provinces who work in Madrid and were returning home for the weekend, or vice versa. The figures also include residents of the peripheral regions visiting relatives in the capital, Madrid natives with second residences in other parts of the Spanish state, and people taking weekend breaks and holidays.

According to the study, "once Madrid was the focus, the spread of the epidemic from the capital to the rest of the territory followed closely what was predictable in view of the normal patterns of movement throughout the interior of the country. If we compare the pattern of [journeys involving] Madrid to that of Barcelona, ​​the differences are obvious. Without a preventive closure in the early days [of the epidemic], this pattern of expansion was inevitable."

These comparative patterns are shown below: 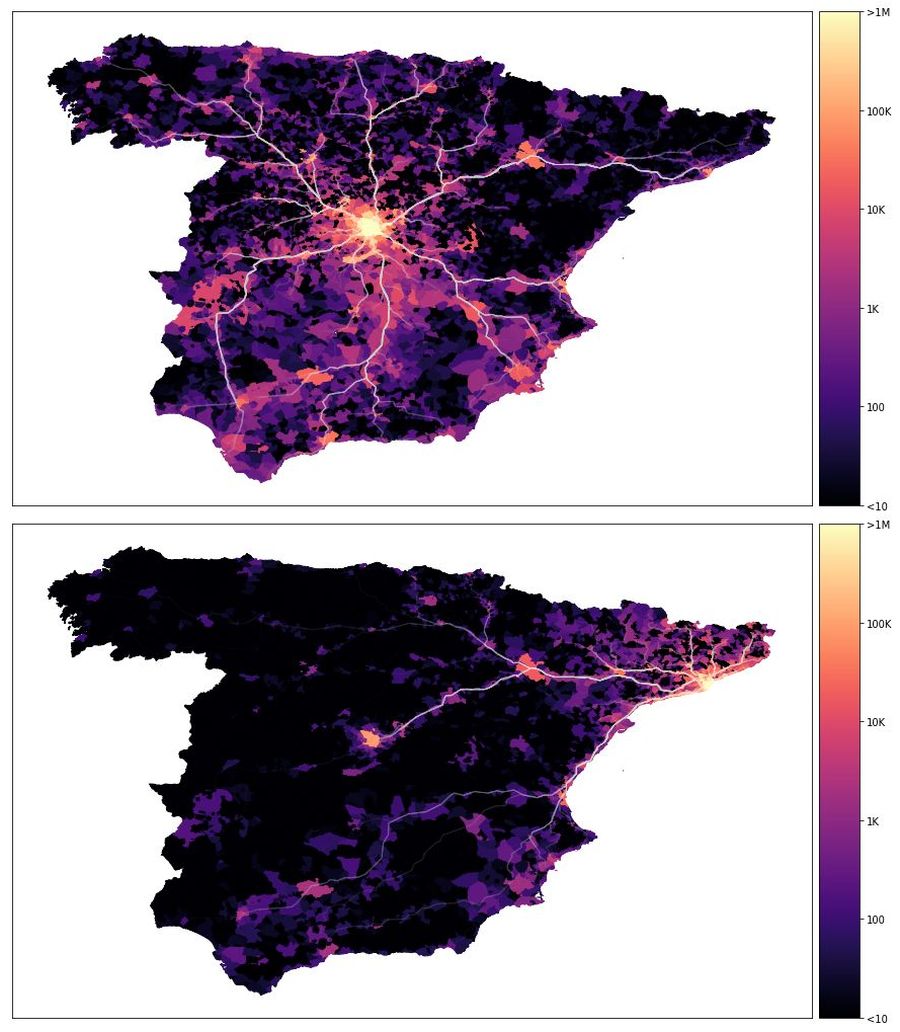 Comparison of travel patterns involving Madrid and those involving Barcelona in 2019. Source: report published in Naukas.com

Why did it spread so fast?

The most virulent factor in the spread of the virus in Spain was the high number of people who had come from or returned from Madrid compared to the local population of other cities. Thus, instead of the classic model of a 'patient zero', in Spain there were multiple focuses, independent from each other, all occurring in a short period of time. In the case of a single patient zero, the person's network of contacts will usually generate natural bottlenecks that limit the spread of a virus, thus gaining time to react before the number of cases soars. In these situations, measures can be taken such as the successful operation in South Korea to intensively trace contacts and put people in quarantine. "However, in a multi-source scenario, individual contact tracing is difficult to quantify as there are no bottlenecks in the transmission, so the only practical measures are the closure of areas and the reduction of movement."

The fact that the starting point was Madrid is understood in the study as a matter of statistical probability, due to the high number of international visitors it receives and the quantity of Spanish residents leaving Madrid to travel to the rest of the world. Madrid received up to 100,000 international visitors every day in early March. Had it been summer, a territory like the Balearic Islands would have also been very vulnerable - since it sees up to 300,000 daily foreign arrivals at the peak of its season, but in the first week of March it was only 36,000. Barcelona is the only city in the Spanish state with figures comparable to Madrid - with 110,000 international arrivals daily in early March.

Below, the original study in English:

MAP | Coronavirus infections in Catalonia by municipalities and neighborhoods