ERC resists polling surge from Puigdemont, who is challenging Cs for second place 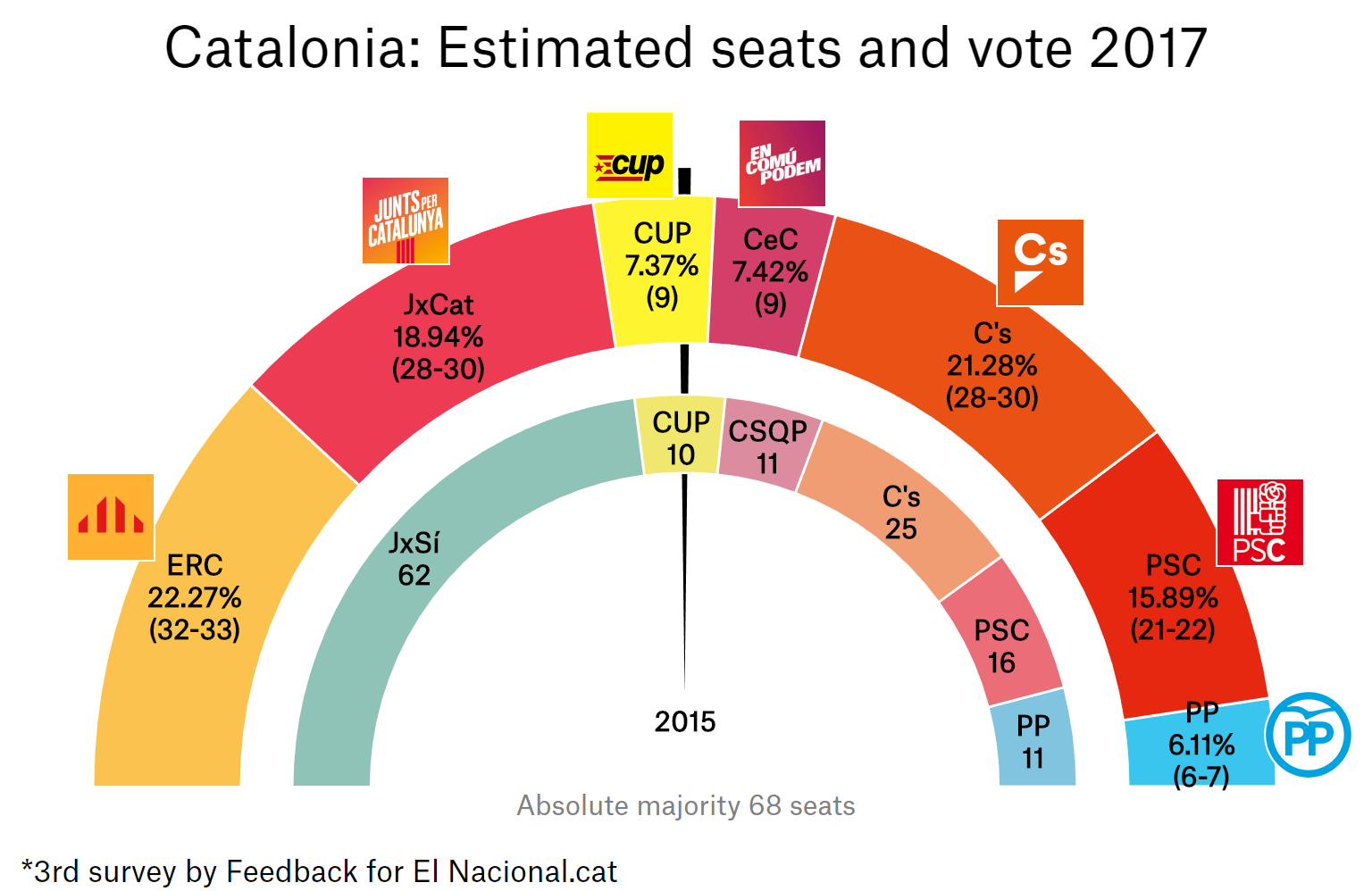 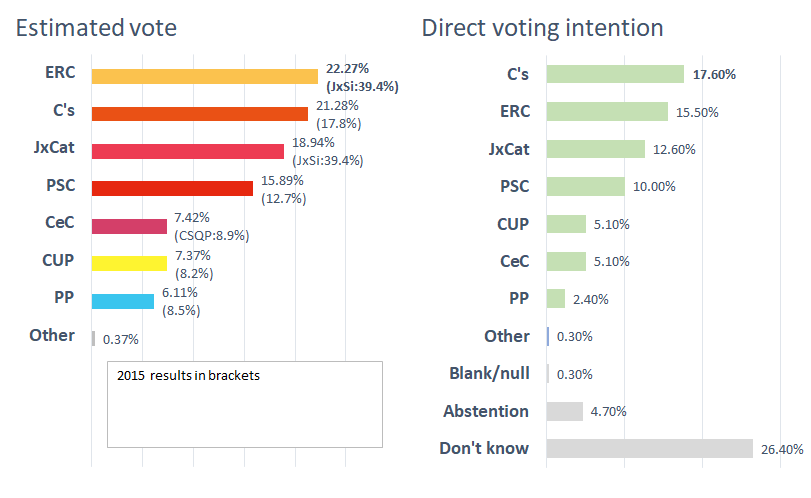 The Catalan Republican Left (ERC) remains as leading force in the Catalan elections of 21st December with an expected 32-33 seats, but support for Together for Catalonia (JxCAT) is taking off and, with 28-30 seats, it is already tied with Citizens (Cs) in second spot, according to the data from the third electoral tracking report from the firm Feedback for El Nacional. The Catalan socialists (PSC) are making gains and obtain 21-22 MPs; the Commons alliance (CeC) is stable on 9, the same as the Popular Unity Candidatures (CUP), while Spain's governing party, the Popular Party (PP), tails the field with 6-7 representatives.

The second major trend shown by the survey is "the Brussels effect". The independence movement - the combined support for ERC, JxCAT and the CUP - is not only guaranteed an absolute parliamentary majority with between 69 and 72 seats, but would also obtain 48.58% of the votes, a figure which would exceed the 47.80% reached in the previous Catalan election in 2015. The data for this tracking poll, is based on 1,000 interviews which were conducted up until Friday 8th December at 10pm, that is, the day following the massive pro-independence demonstration that brought 45,000 Catalans to the European Union's capital.

ERC, the party led by imprisoned vice president Oriol Junqueras, retains its position at the head of the electoral race, but with 32-33 seats and 22.27% of the estimated vote, sees a reduction in the advantage it held over its competitors in the second tracking poll (33-35 seats and 23.07%), which was a slight fall in relation to the result of the first poll (35-36 and 23.97%). The Republicans are, however, the expected winners in three of the four Catalan provinces (Tarragona, where they now push Cs into second place, as well as in Girona and Lleida).

However, the third tracking report reveals a remarkable surge in support for Together for Catalonia. The transversal list that the president, Carles Puigdemont, leads from Brussels rises from 24-26 seats (in the first and second survey) to 28-30, and thus catches up to the Citizens list headed by Inés Arrimadas, and in the best scenario, could be just two seats short of the ERC total. Nevertheless, it remains in third position in percentage of vote (21.28%), in spite of an increase of more than four points in relation to the previous tracking survey.

The CUP catches the Commons

The third pro-independence force, the CUP, headed by Carles Riera, maintains a solid progression, consolidating the 9 MPs that it won in the second survey (in the first, 8) and improving its percentage of the vote: from 7.12% to 7.37%. The radical left-wingers are tied with the Catalonia in Common alliance in terms of seats, and only half a percentage point behind the estimated vote for the Commons group led by Xavier Domènech, which continues to slide with a result of 7.42%.

On the unionist side, Cs hold their place as second force in the duel with ERC, although they are trending slightly downwards. From 30-32 seats in the second survey they are now at 28-30, and their estimated vote has fallen from 22.99% to 21.28%. Leader Arrimadas not only has to compete now with Junqueras for first place but also has to avoid Puigdemont from overtaking her.

The fall in Cs support contrasts with the second consecutive rise for the PSC of Miquel Iceta, which would obtain 21-22 representatives and 15.89% of the estimated vote (20-21 and 15.33% in the previous sample). For its part, the PP of Xavier García Albiol moves timidly upward, although still in last position in the ranking: the survey awards the PP 6-7 seats (6 in the previous tracking report) and 6.11% in estimated vote (5.48% two days ago).

This week's Catalan mobilization in Brussels, base for the Catalan presidency and government in exile, has clearly strengthened the expectations of the three pro-independence forces: ERC holds on in first place, JxCAT rises and the CUP recovers. The three lists together secure an absolute majority of seats (set at 68 deputies), which the previous poll suggested was in danger, and thus are well-placed to stop the advance of the unionism.

The overall estimate of 69-72 seats is the best of the three tracking polls to date for the independence parties (66-70 in the second survey and 67-70 in the first), making it possible to repeat the same parliamentary sum as in 2015  and, in fact, exceeding the percentage of vote attained in those elections: 48.58% compared to 47.80%. ERC and JxCAT add up to 60-63 MPs: if they reach the high figure of this estimate they would obtain separately more than their combined coalition Junts pel Sí (JxSí) won for them together in the 2015 elections.

The forecast for voter turnout in the coming election continues breaking records, now rising to 81.96% (after reaching 74.95% in the 2015 election). Meanwhile, the mass of undecided voters is falling, yet is still very extensive: from 28.5% of voters in the second Feedback tracking poll, the figure falls to 26.4% in the third. In absolute figures, the number of Catalan voters who have not yet made up their minds is now just less than one and a half million - falling from 1,582,885 to 1,466,252.