There will not be a switch of electoral hegemonies. The independence block will maintain its absolute majority of seats in the Catalan election of 21st December with the Catalan Republican Left (ERC) as the largest party in parliament, expected to win the election with 35-36 seats. As for unionism, in spite of the strength of Citizens (Cs), which will be the second-largest force with 31-32 seats, it will not manage to overtake the rival block due to the electoral collapse of the Popular Party (PP). 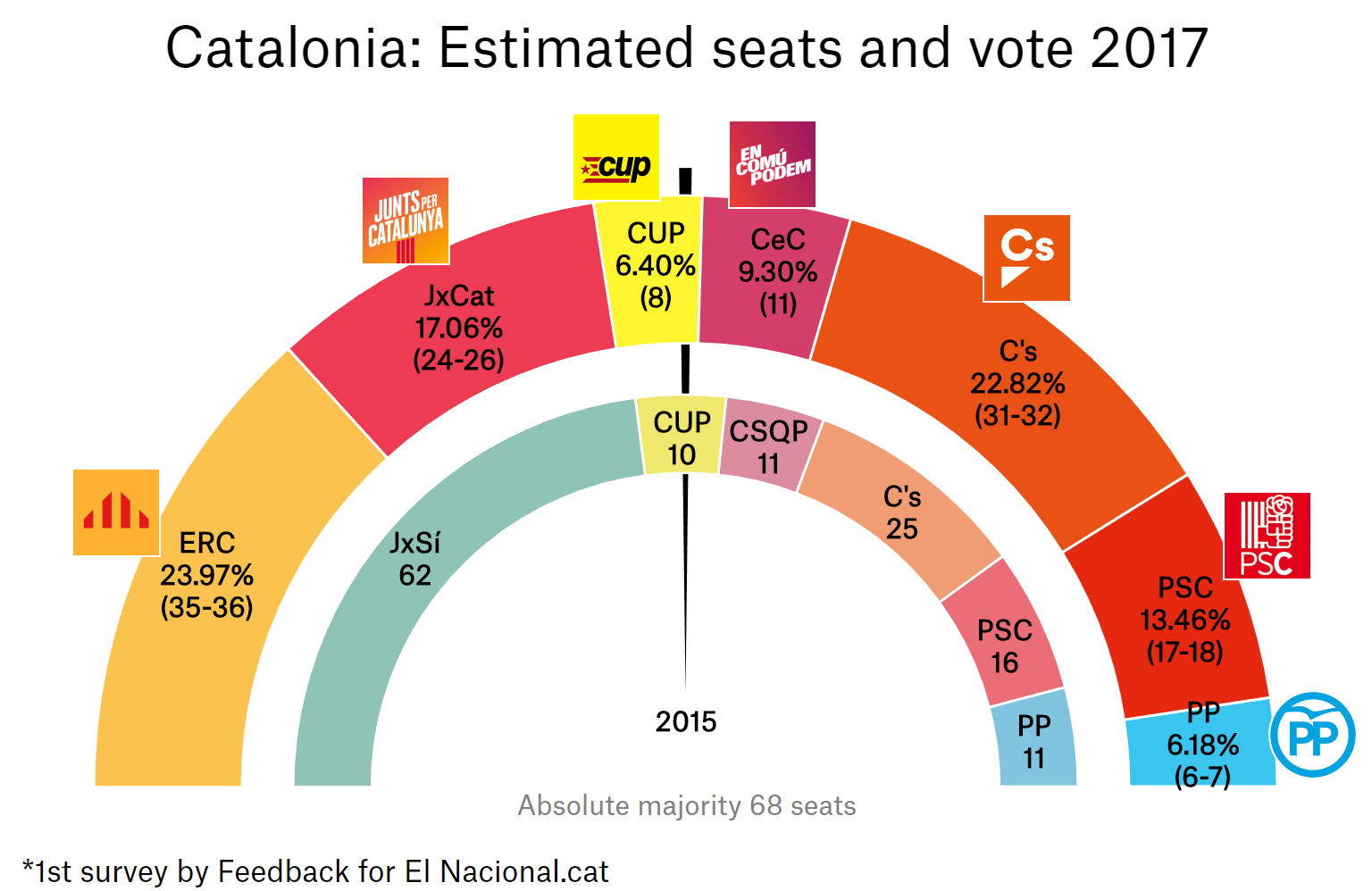 This is the result of the first tracking survey conducted by the polling firm Feedback for El Nacional on the upcoming elections for the Catalan parliament, based on a sample of 1,000 respondents carried out between Friday 1st December and Tuesday 5th at 4pm.

The survey predicts that voter turnout will set a new historical record: 80.53%, even higher than that of 2015, when it reached 74.95%. This fact highlights the exceptional nature of these elections, called by Spanish prime minister Mariano Rajoy, as part of the measures to suspend Catalonia's self-government under article 155 of the Constitution and in the context of a political crisis without precedents that has taken almost the entire government of Catalonia either to prison or into exile.

The Catalan Republican Left - led by vice president Oriol Junqueras who has been ordered by the judge to remain in prison - will obtain from 35 to 36 seats, with 23.97% of the votes, positioning itself as the leading force in the new Parliament. Together for Catalonia (JuntsXCat), headed from exile in Belgium by president Carles Puigdemont, is set to win 24-26 seats and 17.06%, to become the third largest party. The Popular Unity Candidature (CUP) is predicted to lose 2 MPs, falling from 10 to 8 seats, with 6.40% of the votes.

Under the worst outcome predicted for the pro-independence block by the poll, it will still reach the required total of 68 MPs necessary to guarantee an absolute majority in the Catalan Parliament - due to the fact that in the province of Girona, the two parties ERC and JuntsXCat will be disputing a seat between themselves, which will thus fall to the independence block in any case. At the top end of possible outcomes, the three pro-independence parties of ERC, JuntsXCAT and CUP could reach 70 seats, two less than the 72 they obtained in the previous elections. Under this hypothesis, the combined results for ERC and JuntsXCat will yield 62 seats, exactly the same result in parliamentary strength as achieved in the 2015 elections by the coalition Together for Yes (JxSí), essentially formed around the same parties. The percentage of the total vote going to the independence block is predicted to be 47.43%, that is, just 0.37% less than in the election of 2015, when JxSí and the CUP were the choice of 47.8% of voters.

The unionist block remains considerably behind the pro-independence parties, in spite of making important gains. The Citizens party, expected to be the second largest with Inés Arrimadas as candidate, goes from 25 to 31-32 seats, with 22.82% of the estimated vote. The Catalan Socialist Party (PSC) under Miquel Iceta is forecast to be the fourth-ranked force, rising from 16 representatives to 17-18 in the new chamber, and winning 13.46% of the votes. However, the PP, headed by Xavier García Albiol is set for a significant fall: it will finish last in the election for the new parliament, with 6-7 seats - down from 11 - and 6.18% of votes, less than even the CUP.

The unionist parties will attain a maximum of 57 seats, 15 less than the pro-independence groupings, and 10.4% behind them in the popular vote, with a total of 42.46% predicted to go to the pro-Spain parties. Certainly, they have reduced the deficit: they are expected to win 5 more seats and 3.35% more votes than the previous elections, but not enough of a gain to impose hegemony in favour of Spanish unity in the new parliament.

As for Catalonia in Common (CeC), which is in favour of a referendum to decide the future of the relationship between Catalonia and Spain but not in favour of independence, leader Xavier Domènech is not predicted to increase support, joined for these elections with the Catalan branch of the We Can party (Podemos), and backed by the mayor of Barcelona, Ada Colau. In 2015, this ticket, led by Lluís Rabell under the name of Catalonia Yes We Can (CSQP) achieved a result considered discrete, and this year in spite of improving its percentage of vote slightly, from 8.94% to 9.30%, it is expected to remain with the 11 MPs it has had till now.