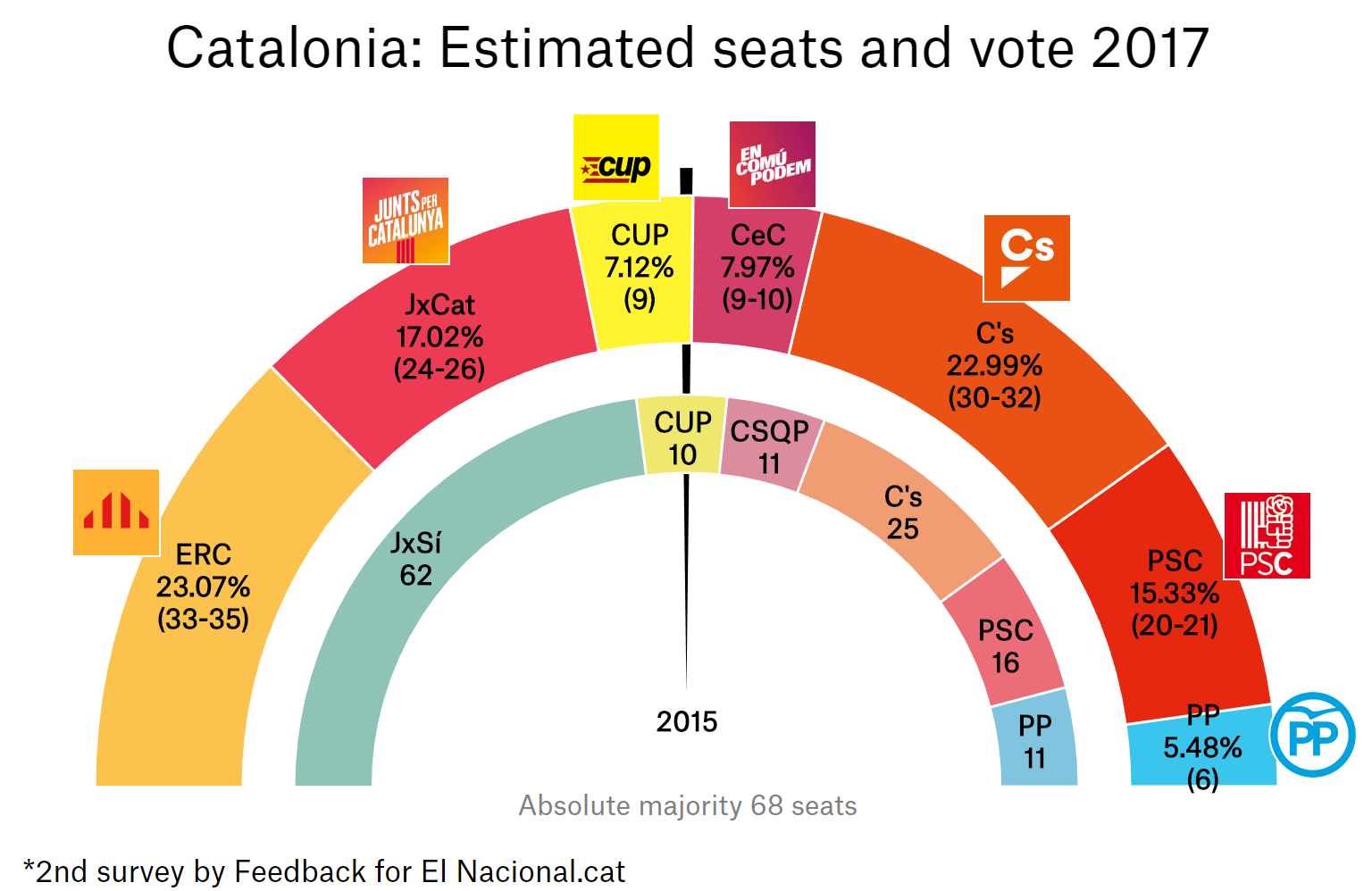 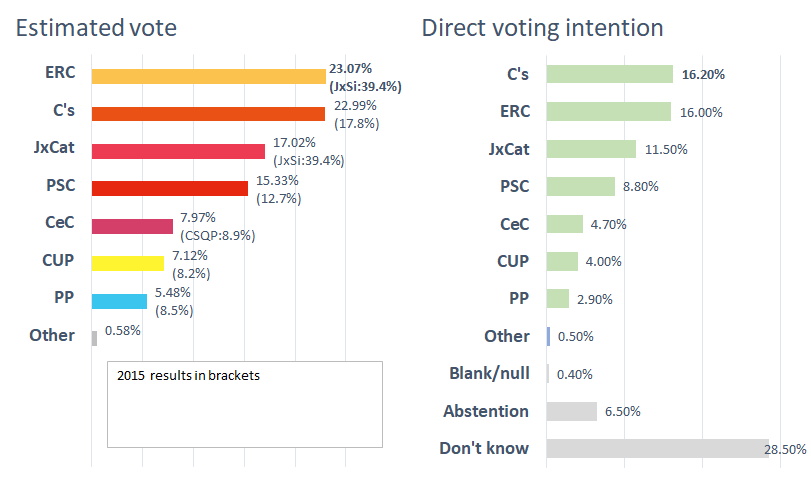 The pro-independence majority in the Catalan Parliament has slipped into the danger zone three days after the start of campaigning for the election on 21st December. According to the second instalment of the electoral tracking survey prepared by polling firm Feedback for El Nacional, with data collected up till 4pm on Thursday, the three pro-independence lists ERC, JxCAT and the CUP would obtain between 66 and 70 seats in the new Catalan Parliament, as against 72 in the 2015 elections. The absolute majority stands at 68.

The ERC party - the Catalan Republican Left, led by imprisoned vice president Oriol Junqueras - has lost support, although it will still win the election, with a prediction of 33-35 seats (35-36 in Wednesday's first tracking sample); JxCAT - Together for Catalonia, the list led by president Carles Puigdemont from exile in Brussels - is stable on 24-26; and the CUP - or Popular Unity Candidature - improves its position, going from 8 to 9 representatives. ERC and JxCAT would reach a total of between 57 and 61 MPs separately, whereas in 2015 they reached 62 in coalition as Junts pel Sí. The CUP would lose one of the 10 seats they won two years ago.

In the unionist block, Cs - the Citizens party, led by Inés Arrimadas - stays as second force in the new Parliament and obtains 30-32 seats (25 in the 2015 elections). In spite of losing one seat since Wednesday's tracking report (31-32), it has reduced ERC's lead in terms of estimated vote. The Catalan Socialists  Party (PSC), which Miquel Iceta heads and which also incorporates the remains of the Catalan Christian democrat party Unió Democràtica, has made the most of the campaign opening: from 17-18 seats in the first tracking poll, it has now risen to 20-21.

However, the Popular Party (PP) led by Xavier García Albiol, continues its fall to become consolidated as the smallest force, behind the CUP, with 6 seats, half of its haul in 2015, when it obtained 11 seats in the Catalan chamber. Mariano Rajoy, PP leader at Spanish level, activated article 155 in response to the declaration of the Catalan Republic on 27 October but it is the Cs who are profiting electorally from that action. The PP will in fact win no parliamentary representation in two of the four Catalan provinces: Lleida and Girona.

The independence block retains its overall lead, but the parties supporting article 155 reduce the distance, rising from 54-57 MPs in Wednesday's sample to 56-59 in this second survey. In percentage terms, 47.21% of voters favour the pro-independence parties (47.80% in the 2015 elections) and 43.80% favour the 155 block (41.62% in 2015, if the former Unió Democràtica vote is included). In the middle of the two blocks are the 'Commons' (Catalonia in Common, CeC), in favour of the referendum and against independence, who are being squeezed. They currently poll at 7.97% (8.94% in the previous elections). The performance of this group, led by Xavier Domènech, reveals the strong polarization of the campaign, as their expected result slips from 11 MPs in the first survey (the same as in 2015) to 9-10 seats in the second.

The advance of unionism is confirmed in the raw data on direct voting intention, where Cs places first ahead of ERC with 16.2%, two-tenths of a per-cent more than the Republicans. JxCAT follows with 11.5%. In fact, the distance between ERC and Citizens is minimal in the estimated vote: 23.07% for the Republicans and 22.99% for their rivals.

On the other hand, this second tracking survey confirms and broadens two essential observations. The forecast for voter turn-out continues breaking records, with 80.84% (80.53% in the first survey and 74.95% in the 2015 elections, which hold the turn-out record up till now). However, the number of undecided voters falls, in spite of still being very significant: 32.6% in the first tracking sample from the polling firm Feedback, and 28.5% in the second. In absolute figures, from 1,811,000 to 1,582,885.