Juan Carlos I will not return from Abu Dhabi this Christmas. On August 3rd, Spain's former king fled to the United Arab Emirates besieged by corruption scandals. So far, a total of four investigations are hanging over him in Spain and Switzerland - the United Kingdom could initiate a fifth - and the king emeritus has even admitted to having defrauded the Spanish Treasury of more than 678,393 euros. Spain's monarchy is going through its most serious crisis in the last 45 years. But in the much-awaited Christmas message for this unfortunate 2020, the current head of state Felipe VI preferred to tiptoe around his father’s scandals.

The Spanish king focused almost all of his traditional Christmas address on the effects of the severe crisis triggered by the coronavirus pandemic. He couldn’t stop referring to it. But Covid-19 also provided Felipe VI with a way of dodging the no less critical moment of Spain's monarchical institution, the apex of the Spanish state's institutional architecture and political regime. It is a crisis which fully affects the honour of his family.

Barely three short paragraphs, at the end of a text of five pages and 1,697 words, read for 13 minutes and 30 seconds, were all that was dedicated to the matter by the head of state and head of the Spanish royal family, of which Juan Carlos is a part: an appeal to the need to "preserve the ethical values ​​that are at the roots of our society."

Felipe's reference to the matter was generic and linked to his accession speech to Spain's parliament on June 19th, 2014, following the abdication of his father, in a climate of suspicion about his irregular conduct. "Already in 2014, in my accession speech before the Cortes Generales, I referred to the moral and ethical principles that citizens demand in our conduct," he said in his Christmas message, recorded in the Zarzuela royal palace.

Then the current king made what can be interpreted as a highly veiled allusion to his father, but still expressed as a generalization: "Principles which oblige us all without exception; and which are above all considerations, of whatever nature, even personal or family." If he had put it bluntly, he might have said that Juan Carlos I cannot be an exception.

"This is how I have always understood it, in line with my convictions, with the way I understand my responsibilities as Head of State and with the renovating spirit that has inspired my reign from day one," concluded Felipe VI, in an attempt to distance itself from the irregular behaviour that has put his father squarely under the spotlight.

Felipe VI placed these ethical values ​​on the same plane as democratic principles - the Spanish constitution and "compliance with the law" - as assets in dealing with the consequences of the pandemic, in addition to the expected vaccines. The king appealed to the need to face the future "with confidence in our country and in our model of democratic coexistence." "Neither the virus nor the economic crisis will defeat us," he said.

The head of state called for "a great collective effort" to overcome the health, economic and social challenges facing the country. "Overcoming them is a great national goal that must unite us all," said Felipe VI.

Catalonia, absent from the message

To this end, the king stated that Spain has "a strong society" and a "solid state"; the European Union's support for economic recovery and the "system of democratic coexistence" guaranteed by the Constitution, "which we all have a duty to respect." At this point, he called for "the reencounter and pact between Spaniards," with reference to the climate of political tension prevailing in Spanish politics. In this, one can also read a claim for the continuity of the monarchy at a time when the debate on the form of state has reached even the Spanish cabinet, with Pablo Iglesias and Podemos advocating for a republic while prime minister Pedro Sánchez and the PSOE side with the monarch.

In his message, the Spanish king spoke of "respect for plurality and differences" as a component of democratic values. In any case, Catalonia was absent from the monarch's speech in a year in which the chasm that opened up between Felipe VI and a majority of Catalan society after his speech on October 3rd, 2017 has only widened. 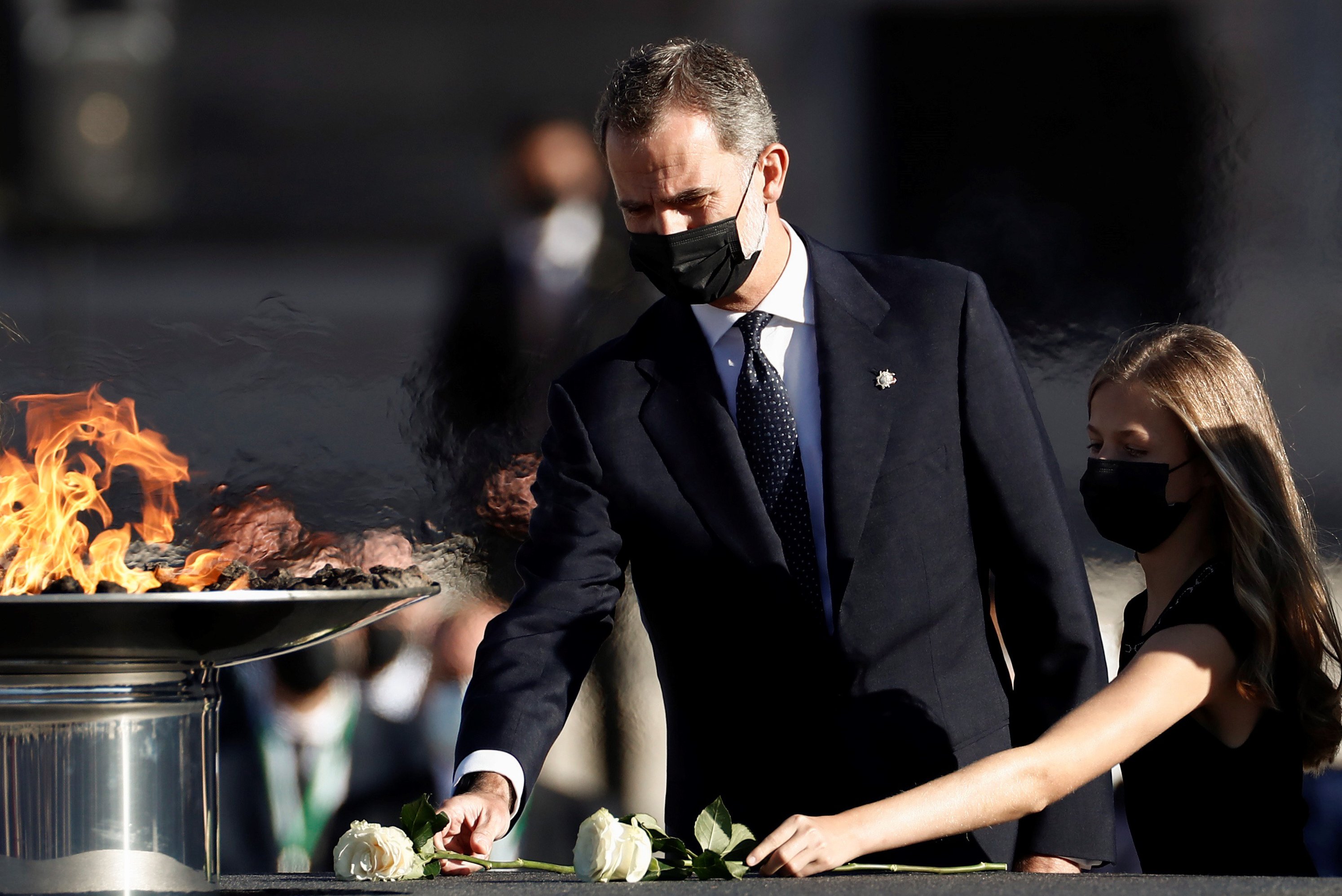 The fall of the Juan Carlos myth

This year's message from Felipe VI was awaited with special interest due to the accumulation of investigations and suspicions that have destroyed the image of Juan Carlos. The king emeritus is the subject of four current investigations for alleged irregularities, three in Spain and one in Switzerland. In addition, his ex-lover and companion, Corinna zu Sayn-Wittgenstein (also known as Corinna Larsen) has made allegations about him to the UK authorities.

The first investigation opened by Spanish Supreme Court prosecutors focuses on commissions allegedly received by Juan Carlos through an offshore company for the construction contract on the Saudi high speed train from Mecca to Medina. This was thought to have occurred in 2008, when the then-monarch still enjoyed inviolability as head of state, so these allegations may not reach trial.

In any case, this matter led Felipe VI, on March 15th this year - just as the first wave of the coronavirus pandemic was hitting Spain hard - to announce that he was renouncing his father's inheritance and abolishing Juan Carlos's annual stipend from Spanish public coffers, a sum of 194,232 euros.

Investigations into the alleged Saudi Arabian commissions began with a conversation with his ex-lover Corinna Larsen recorded by imprisoned ex-police commissioner José Manuel Villarejo in which she revealed the existence of Swiss bank accounts belonging to the former monarch with more than 100 million euros in deposits. In addition, the king emeritus was said to have given 65 million euros to his female companion, which he later asked to be returned.

Just two weeks ago, on December 9th, Juan Carlos I acknowledged having filed a declaration with the Treasury to regularize a debt of 678,393.72 euros and thus avoid legal action, although all indications are that prosecutors will continue to investigate. This money is related to the use of financially-opaque credit cards by the former monarch and other members of the Spanish royal family between 2016 and 2018. The cards were used to pay for expenses in hotels, travel and restaurants. This is the second investigation open with the Supreme Court.

The funds for the opaque cards were allegedly covered by Mexican businessman Allen Sanginés-Krause. An airforce lieutenant colonel, Nicholas Murga Mendoza, is said to have acted as proxy. Juan Carlos would thus have committed a tax offence for having failed to declare more than 120,000 euros from the tax authorities.

The third investigation by the Supreme Court prosecutors against Juan Carlos I is based on alleged money laundering through different companies detected by the Bank of Spain's anti-fraud unit. Among other allegations, it is claimed that the former Spanish head of state had an active account on the island of Jersey in which he deposited 10 million euros.

The accounts in Switzerland

Larsen, located at the epicentre of the sentimental-financial scandal that has accompanied Juan Carlos since his abdication, has now reappeared in the investigation by the Swiss prosecutor's office. Just this week, it has transpired that prosecutor Yves Bertossa has raised to more than 82 million euros his estimate of the money which was moved between accounts linked to the business dealings in which Juan Carlos and his ex-lover took part.

In addition, Corinna stated in an interview with the BBC that she would report the Spanish king emeritus to the British legal authorities for "harassment" by Spain's secret service, the CNI, to which she claims to have been subjected, after she broke off the relationship with Juan Carlos in 2012 after their controversial trip together to Botswana.

That hunting trip in Africa, in which Juan Carlos broke his hip, and after which he apologized in public - "I'm sorry, I made a mistake and it won't happen again" - was the trigger for the scandals that led the monarch to abdicate on June 19th, 2014 and, six years later, on August 3rd, 2020, to flee Spain and settle in the United Arab Emirates, where he remains.