Sànchez and Cuixart, four years on from 20th September protest: "It was a trap"

It has been four years since that September 20th, 2017 in Barcelona, the day that the Spanish Civil Guard carried out a search of the Catalan economy ministry and the public responded with one of the most important spontaneous popular mobilizations in the history of Catalonia, just days before the 1st October referendum was to be held. A day that was a turning point in the Catalan independence movement and that left one of the most manipulated images of the entire process: Jordi Sànchez and Jordi Cuixart standing on the roof of a police vehicle trying to call off the demonstration, which served as "evidence" to send the two pro-independence leaders to prison.

Today, the then-Catalan National Assembly (ANC) president Sànchez and the still-Òmnium Cultural president Cuixart, enjoying their first 20th September since 2017 outside a prison cell, have very clear ideas about that day. Both say that it was a "trap" set by the Spanish state to counter the referendum, although one on which they still have a few questions unresolved. "It was a turning point, you don't need to have great knowledge about how searches are carried out to realize that what the Spanish state had laid was a trap," explained the Òmnium president in a Catalunya Ràdio report aired this Monday.

That is, Cuixart does not see as "normal that there were Civil Guard vehicles [parked outside the ministry] with weapons in them, nor that an attempt was made to enter the headquarters of a political party [that day] without a court order, nor that fifteen arrests and forty searches were carried out at the addresses of public servants, nor that the prosecutors made public that it was going to summon 700 mayors to declare in court...". "I didn't foresee at all that this would mean that we would end up in prison, but it was very clear that the Spanish state had changed its strategy to fight the referendum," he admits.

For his part, the former ANC leader acknowledges that "he would never have imagined that for a demonstration that ended without any notable incident he would be imprisoned and sentenced to nine years in prison." “I wasn’t aware of it at the time, and [realized] later through a news report, that they had set a trap for us,” Sànchez recalls.

In this regard, Sànchez emphasizes that he has a key question still to be resolved: what were two Civil Guard cars doing there with weapons inside and without any kind of surveillance? In fact, Cuixart adds, in a democratic country the action of the police would have been investigated, and why there was a police car left there with doors unlocked and weapons inside.

While the two pro-independence leaders are very clear that they did “what was right”, the former ANC president admits he would not get back on the car. But not so much for fear of being imprisoned again, but "because many media outlets used the image to criminalize the movement." Cuixart, on the other hand, has once again repeated on social media his recurring "We'll do it again!". 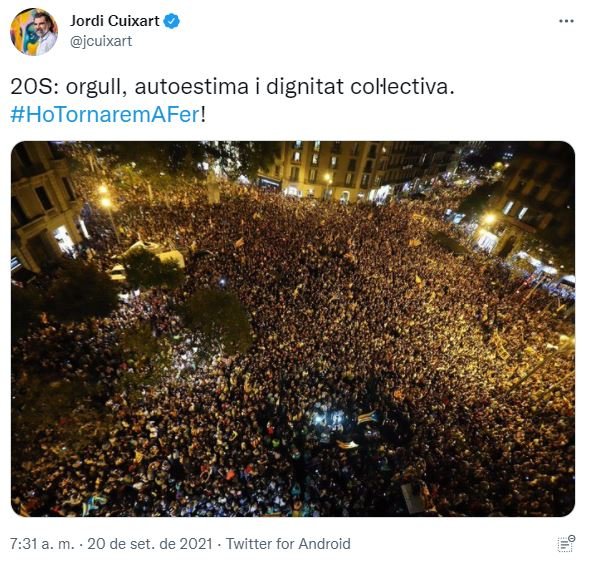 "September 20th: pride, self-esteem and collective dignity" says the first part of Cuixart's message, which is accompanied by a picture of thousands of people gathered outside the economy ministry that evening. On whether images like these would be possible today, the Òmnium president believes so, because "the independence movement is stronger than ever." He asserts that that is shown by both the success of this year's Diada, and last February's elections in Catalonia, when the movement obtained 52% of votes.

Sànchez expresses himself along the same lines: "We have very large energy reserves, we saw it at the Diada." A Catalan National Day rally that, indeed, was the most multitudinous popular mobilization in post-Covid Europe.

Main image: Jordi Cuixart and Jordi Sànchez standing on the roof of a Civil Guard car on September 20th, 2017 / ACN