Independence movement once again fills Barcelona for the 'Diada': 400,000 people

Nearly 400,000 people have returned to the streets this Saturday for Catalonia's National Day, the Diada Nacional, in the protest called by the Catalan National Assembly (ANC), according to a crowd estimate by the organization itself. A year and a half after the outbreak of the Covid-19 pandemic, the independence movement has once again filled the streets of Barcelona in the largest gathering since the rally held in Perpinyà by the Council for the Catalan Republic, just before the start of the health crisis. Barcelona city police reduced the number on the street today to 108,000 attendees.

In a festive and clamorous atmosphere in which the chant of consensus among the protesters was that of "Independence", the march headed seaward from the Spanish National Police headquarters - the planned starting point, up the hill at Plaça Urquinaona soon become too crowded to reach - to the Estació de França rail terminus, where the Assembly had set up its stage for speeches. 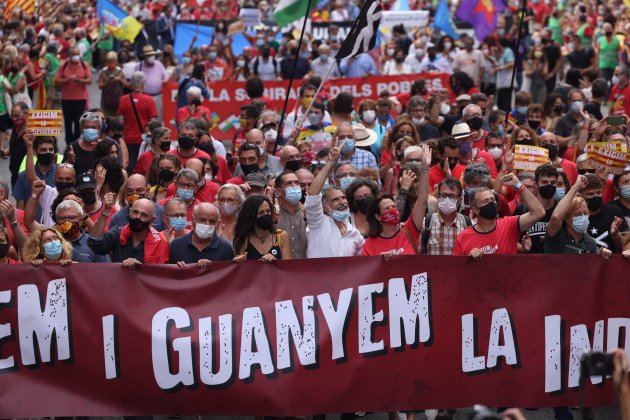 Cuixart and Paluzie greeting independence supporters who applauded them from the balconies above, on Via Laietana / Photo: Sergi Alcàzar

When the march reached Plaça de l’Àngel, it met with one of several separately-called protests, in this case that of Donec Perficiam, a platform founded by seven former ANC secretaries who were critical of the NGO's links to the Catalan political parties. Protesters chanted slogans such as "Enough, traitors" and "Out with the collaborationists". Arriving at the Passeig de Isabel II, the ANC dissenters waited for the head of the protest to arrive so they could give them another ear-full of their slogan.

On both sides of the street, hundreds of people waving pro-independence estelada flags were already waiting for the march, which continued until the Estació de França where the stage awaited them.

Meanwhile, further back, some protesters at the tail end of the march took advantage of the adjacency of the Spanish police station on Via Laietana and threw eggs and toilet paper at the building they reagrd as a symbol of repression.

Paluzie paraphrased Carme Forcadell's famous "President, put out the ballot boxes" of 2014, updating it to a forceful "President, carry out independence". The ANC president demanded that the pro-independence forces take advantage of the 52% majority they have in popular support, as registered in this year's parliamentary elections.

“Concessions from the Spanish state will never arrive because it believes they are a symptom of weakness and takes advantage of [the situation] to weaken us,” she warned. Thus, Paluzie asked the Pere Aragonès government to promote "its own project based on self-determination." All this virtually on the eve of the dialogue table meeting, to which she did not explicitly refer.

Cuixart, who had not attended the Diada in four years due to his imprisonment, was loudly applauded during his speech and he stated his gratitude for the resilience of the movement in the face of the repression.

The Omnium president called on Catalan politicians to "rise to the task" and warned that "we will not allow them to squander" the strength of the movement. He also issued a warning to the state: "We neither are able to nor want to renounce Catalonia's civil and political rights!". 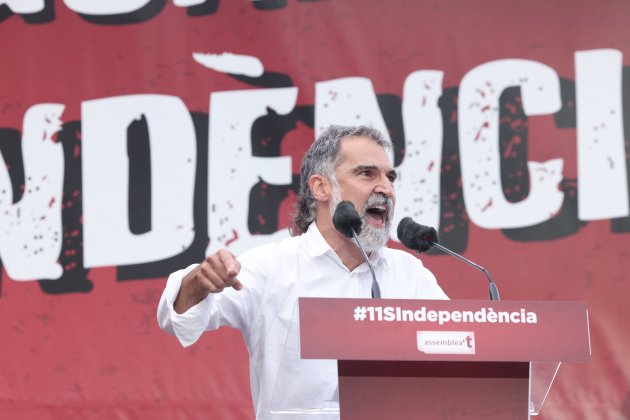 Finally, he condemned the state's repression and pointed out that the only blockage to Catalan independence "is violence", in a call to the public to keep up the struggle. "We can do it again because we have enormous power. Non-violent struggle and civil disobedience are key to transforming society," he claimed.

"They can go to hell"

In his speech from the stage, the president of the Association of Municipalities for Independence, Jordi Gaseni, celebrated the large turn-out for the march and sent a clear message "to those who did not want us to demonstrate": "They can go to hell!"

Gaseni called on marchers to keep going "towards the goal we all have" and to leave behind the internal struggles within the movement. He also praised the work done by municipalities on the key days in the independence process, such as 1st October 2017.

With the dialogue table just ahead

With this major mobilization, the independence movement has once again shown its strength in the streets, and it has done so just a few days before the second meeting of the Spain-Catalonia dialogue table, at which the two Catalan government partners, ERC and Junts, approach with marked differences on the strategy to be followed.

In fact, on the eve of today's Diada, there was an exchange of reproaches between the main leaders of the two parties. On the one hand, the Catalan president, Pere Aragonès, (ERC) challenged Junts - although without naming them - to explain and specify the alternative route to the dialogue table with the state. The speaker of parliament, Laura Borràs, replied forcefully that the alternative is unilateralism.

This year's demonstration, then, has recovered something akin to the strength of previous years - from that era when pandemics only appeared in disaster movies and futuristic series. Last year, the ANC's mobilization was limited by health restrictions, and only static, carefully-distanced events could be held in which nearly 60,000 people participated.