The nine Catalan political prisoners together, in a call for unity and an amnesty

The nine Catalan political prisoners have appeared together in a symbolic act of unity against repression this Monday, in the midst of the campaign for Catalonia's 14th February parliamentary elections. Organized by the pro-independence group Òmnium Cultural and open only to the media (although some supporters followed the event from the street), all of the prisoners, on day-leave from the penitentaries where they are serving jail sentences for sedition, read a manifesto in front of the Palau Robert in central Barcelona. They held banners calling for an amnesty for all those affected by the political repression in Catalonia, and expressed their confidence that the independence movement will repeat its electoral triumph of the last elections in 2017.

"We are convinced that the independence movement will fill the ballot boxes with dignity and hope, that the majority of Catalans will give a clear message to Spain and the world: asserting the right to self-determination of the people of Catalonia, and demanding an end to repression in order to face the democratic resolution of a political conflict, through an amnesty and the return of the exiles," they affirmed.

At a time when the two main pro-independence parties are caught in an electoral duel, after a legislature full of tension and internal disputes, the prisoners recalled the "massive demonstrations" of the last ten years and the electoral victories. 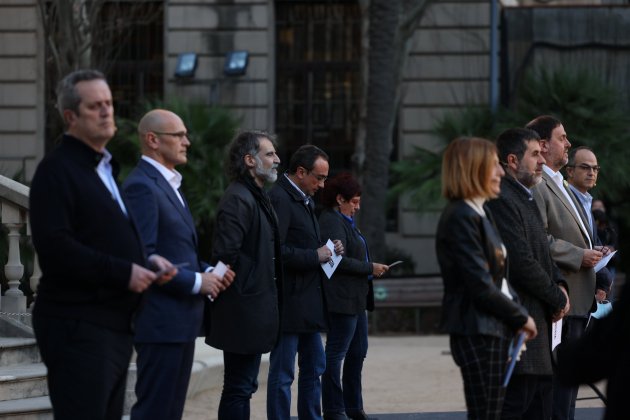 In response to this internal wrangling, they called for the government which emerges from the elections to "defend an inclusive project for the country of Catalonia, in the service of social reconstruction and national liberation; and to move towards this common horizon it is essential to continue constructing a shared strategy."

The message contrasts sharply with the reproaches being traded on the hustings by the candidates of JxCat and ERC, Laura Borràs and Pere Aragonès. While Borràs accuses the Republican of wanting to form a tripartite with the unionist PSC, Aragonès criticizes JxCat's promise to reactivate Catalonia's uniliateral declaration of independence.

In the manifesto, the nine prisoners also stated that they are convinced that, within a few days, they will lose the open prison regime they were granted last week. "We know that this Level 3 regime will be ephemeral again, that the state powers will suspend it and annul it in a matter of days," they predicted. In fact, just yesterday the far-right Vox party called on the public prosecution service to appeal it, although there has not yet been a decision.

"But the repression only strengthens the democratic principles which have led us to prison, and have led more than 2,800 pro-independence activists to be facing retaliation for political reasons," they warned. It should be noted that some of those pursued by justice also face accusations from the Catalan government itself.

The pro-independence leaders, all imprisoned for their roles in the 1st October 2017 referendum and independence process, also referred to the Catalan High Court's decision to impose the election date of February 14th, despite the Covid-19 health crisis. "They have imposed the date of the Catalan elections against a broad consensus of Parliament and the criteria of health experts, forcing citizens to choose between the protection of their right to life and their right to political participation," they said.