Prisoner evaluation professionals in the Catalan justice department have granted eight of the imprisoned pro-independence leaders an open Level 3 prison regime once again. Exactly six months after most of them were ordered to return to a standard lock-up regime due to the intervention of the Spanish Supreme Court, they will again be able to leave their prisons during the day, and overnight at weekends. This will also make it easier for them to take part in the build-up to the Catalan elections set for February 14th, whose two week campaign begins in just a few hours' time.

The change of status ratified this Thursday by the prisoner classification service comes after prison treatment boards at the penitentiaries of Puig de les Basses (Figueres), in relation to Dolors Bassa, and Lledoners (Sant Joan de Vilatorrada), in relation to Oriol Junqueras, Jordi Turull, Raül Romeva, Josep Rull, Joaquim Forn, Jordi Cuixart and Jordi Sànchez, proposed a return to the Level 3 status on January 14th. The exception is Carme Forcadell, whose case is pending a decision from Wad-Ras prison, currently confined due to a Covid-19 outbreak.

Thus, eight of the nine political prisoners serving jail sentences for sedition in relation to the 1st October independence referendum will be able to leave their prisons tomorrow, Friday, the first day of the election campaign. Accordingly, their participation in various political party events is planned. Despite being disqualified from office holding as part of their sentences, they still have the right to take part in political events and to campaign for votes. All are subject to a penalty which deprives them of liberty, but they retain the rights to assembly and political participation.

But nothing is definitive. The Level 3 regime can be appealed. In fact, this happened last summer, with the Supreme Court overturning it and initiating a process under which the prisoners returned to prison - some immediately, others many months later, depending on the decisions of other judges in the process. Nevertheless, should the open regime be cancelled in the middle of the election campaign, the prisoners have another recourse: the ordinary prison leave they are permitted under the standard Level 2 regime. All nine have served a quarter of their sentences, which means that they have 48 days leave a year which they can distribute as they wish, subject to approval. And in the midst of the election race, they are more than likely to use this option.

The prisoners enter the campaign

The granting of the new Level 3 regime coincides precisely with the start of the campaign for the February 14th election: the campaign officially begins this Thursday night at midnight. All the prisoners will be part of the campaign. And it won’t be the first time. They did something similar in 2017 when elections were called by Spanish prime minister Mariano Rajoy after taking power in Catalonia under Article 155 of the constitution.

The difference, however, is that at that time, none of those now jailed had been convicted, so they were not disqualified from holding office, and most were candidates. And four of them were kept behind bars: Oriol Junqueras, Joaquim Forn, Jordi Sànchez and Jordi Cuixart. The rest were granted bail in the build-up to the 2017 campaign - in fact, on the very afternoon that the election campaign began, and some of them appeared by surprise at the their party's campaign openings. Carles Mundó, for example, arrived directly from Madrid to the ERC electoral meeting, along with Marta Rovira. 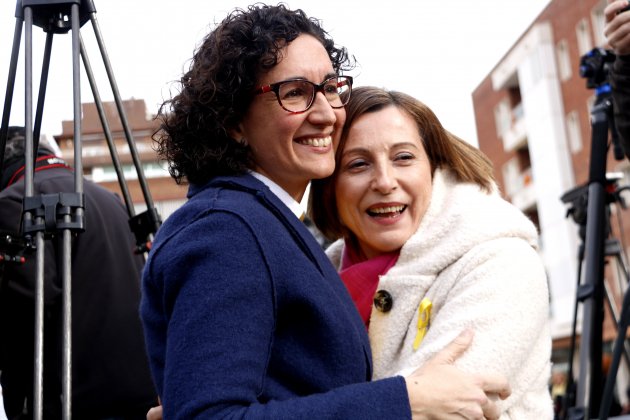 Now the situation has changed. They have been convicted, and their sentences include a disqualification from holding public office which prevents them from standing in elections. But it does not prohibit them from participating in events and asking members of the public for their votes.

In the case of Junqueras and Forn, it will be the first time they have been able to physically participate in a campaign since the last Catalan election, although in spring 2019, while remaining in pre-trial imprisonment, they not only took part in elections but were successful candidates: Junqueras was elected as an MEP, and Forn as a Barcelona city councillor.

Junqueras has already said that he will dedicate a large proportion of the leave days he is permitted to the campaign. And his first appearance will be this Friday, at the meeting which the party he leads, the Catalan Republican Left (ERC), is holding in Badalona. Three of the other political prisoners, Raül Romeva, Carme Forcadell and Dolors Bassa, are also expected to be part of the ERC campaign, pending the authorization of their leave.

Together for Catalonia (JxCat) will also have prisoners Forn, Jordi Sànchez, Jordi Turull and Josep Rull in its campaign. The four prisoners will leave Lledoners jail to take part in the party's major electoral events.