The Catalan election campaign is shaping up as a tight three-way race, and within that, there is a duel between ERC (Catalan Republican Left) and JxCat (Together for Catalonia) for leadership of the pro-independence bloc against the main unionist rival, the PSC (Catalan Socialists). The strategies of each of the two pro-independence parties involve fighting for prominence over the other, and the proposal made by ERC candidate Pere Aragonès for a face-to-face debate with the Socialist, Salvador Illa, hit its target - as the PSC accepted the offer. In this context, the JxCat candidate, Laura Borràs, has now reacted by offering a three-way format.

"I propose to them: would the gentlemen of the PSC and ERC like to have a trio?", said Borràs in the press conference at which she presented 50 electoral commitments of the Together for Catalonia party aimed at creating a "strong and efficient government" in the next legislature.

VIDEO | Laura Borràs: "For the first time, there are surveys showing JxCat in the lead"

Ahead in the polls

The JxCat candidate attributed the ERC and PSC initiative to an attempt to counter the polls that not only point to a rise in support for her candidacy but even, in the case of a poll published today by El Español, predict that JxCat will finish first on February 14th. "It seems that now there are polls that give us an advantage, and right at the same moment, gentlemen appear who want to capitalize on the debate by doing a face-to-face," she retorted.

The presidential candidate said that she had not contacted their rivals to make a specific proposal since she had just learned of Salvador Illa's decision to accept Pere Aragonès's proposal while addressing the press conference.

The head of the ERC list presented his proposal to the PSC candidate during the electoral debate on Sunday night on Spanish public broadcaster TVE, in which nine candidates took part. Illa accepted the proposal this Monday during a press conference with the Catalan News Agency (ACN), arguing that he wanted to contrast his manifesto with that of ERC to show that his "proposal for re-encounter is a winner."

Illa said that he saw no problem in debating with ERC as long as it was in line with the electoral legislation and rules. Later, at the ERC press conference, Aragonès celebrated that the Socialist had accepted his proposal.

Spanish digital newspaper El Español published a survey this Monday which places Laura Borràs ahead in the race to become Catalan president, predicting that JxCat will win 31-33 seats in the Catalan Parliament, narrowly ahead of the PSC (28-30 seats) and ERC (also 28-30 seats). However, an absolute majority (68 seats) for the pro-independence bloc would not be assured, as the poll estimates that the combined total for JxCat, ERC and the CUP would be between 66 and 72 seats. 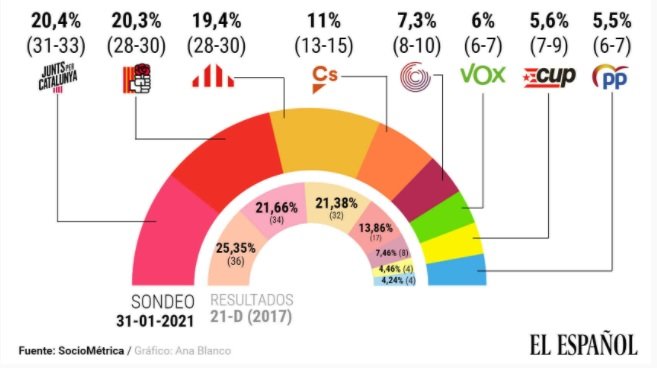 In addition, a new poll by Spanish newspaper La Razón also predicts that the Catalan race will be a close three-way battle, forecasting that ERC and JxCat would both finish with 32 seats, while the PSC would obtain 29 deputies. Again, La Razón picks the pro-independence parties to achieve an absolute majority, with 71 seats in the 135-seat chamber.

Last Friday's poll by the Catalan public research agency CEO predicted ERC to win 34-35 MPs, ahead of JxCat on 32-34, with the PSC trailing in third with 26-29 seats. The pro-independence bloc would total 74-77.

Laura Borràs in an image from the JxCat campaign opening / Efe