Aragonès in the Catalan Parliament: "Let's not underestimate the dialogue table"

The negotiation process with the Spanish state and the dialogue table have been the key elements in the speech with which the Catalan president, Pere Aragonès, opened his first general policy debate in Catalonia's Parliament today. Aragonès, who wanted be very explicit in differentiating himself from the governments that preceded his current one, reiterated his commitment to the culmination of the process towards the independence of Catalonia. Faced with the skepticism of his political partners in the negotiating process with the state, he asserted that the dialogue table was an "historic opportunity" and called on his colleagues not to "underestimate it" and to "get on board the train of negotiation". Aragonès also sent a message to the Spanish state demanding that it take an initiative and end the repression that led to the arrest of exiled president Carles Puigdemont on Thursday.

His pro-independence partners in Together for Catalonia (Junts) did not like the president's speech. Junts members assert that Aragonès has expounded on the proposal for dialogue promoted by his party, Catalan Republican Left (ERC) instead of sticking to the content of the legislature agreement between the two political groups. At the end of the speech, the Junts leadership informed the Republicans of this reaction, but they also expressed their complaint publicly from the lecturn in the chamber.

The debate began at 4pm. Previously, the president along with his vice-president, Jordi Puigneró (Junts), had met with all the deputies of their two parties. This desire to project an image of unity did not prevent the differences between the partners from surfacing during the speeches. Starting with ERC's commitment to dialogue.

Aragonès's address, lasting almost two hours, was only interrupted once by the applause of his deputies. It was when he announced that the Via Laietana police station would become a centre of historical interpretation. The speech ended with the commitment to do "everything possible to culminate the independence of Catalonia".

He reiterated that the way to achieve this must be a referendum, which he positioned as "the most inclusive proposal, which allows all options to express their voice, and have a chance to win." "All options must be able to win and we must all accept the result," he said, assuring that the referendum will arrive because it is inevitable and that when it does, he will devote all his efforts to winning. 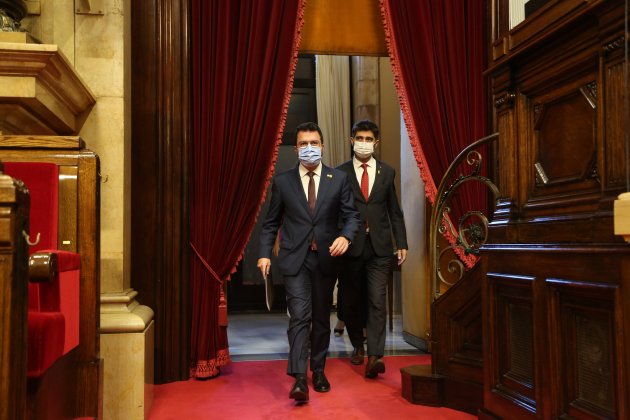 To make progress in the independence process, he believes that the only possible route is to force negotiations with the Spanish state. He admitted that skepticism in the face of negotiations with the state is logical - that the opposite would be naive - but he called on his fellow MPs to take a broad outlook and to understand that achieving this goal is complex, that "there are no shortcuts or magic solutions."

However, not only did he not refer to the absence of his Junts partners from the dialogue table, but also he asserted that, for his government, the Catalan delegation represents the whole of society and brings the great consensuses of Catalonia to the table.

Warning to the state

Aragonès admitted that he is aware that the temptation of the Pedro Sánchez government will be to "send the process to sleep", to try to divide the pro-independence forces so as to make the fewest possible concessions and divert it into proposals that are not included in the negotiation. Against this, he portrayed the arithmetic dependence that the PSOE government has on the pro-independence votes in the Congress of Deputies as one of the trump cards of the Catalan independence movement.

"We have much more power than some would like. We must not renounce the use of it," he said, admitting that many people would like this process to derail, from the Spanish far right, the deep state, and "perhaps also people within Catalonia ".

At this point he also sent a message to the state. He demanded that decisions be taken, and warned that actions such as the arrest of Carles Puigdemont last Friday, the persecution of former members of the Catalan government by the Court of Accounts, the case of Tamara Carrasco, or demands for a 13 year ban on office holding by the pro-independence mayor of Ràpita "don't help at all."

"There are different powers in the state but none of them can be exempted from the space of responsibility they have. Action can and must be taken," he warned the Pedro Sánchez government, noting that if it does not help create the right conditions, the dialogue process will be much more difficult. 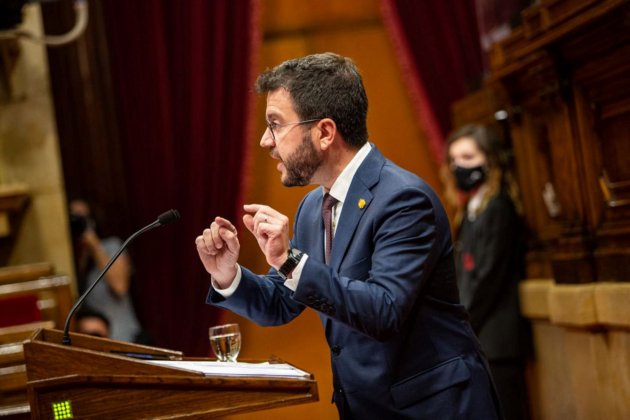 Throughout his speech, Aragonès repeatedly emphasised the differences of his administration from the governments that have preceded it. Not only that, he asserted that his executive is transforming the institution.

"We have to do things differently and, above all, we have to get rid of all the old inertias," he warned, assuring that his cabinet represents a new generation: "For the first time in many years, the 'usual people' are not at the head of the Generalitat of Catalonia. And this will be noticeable".

The president went further and made a general appeal to MPs to abandon what he described as sterile gestures, tension, self-interested controversy, tactics, conservatism hidden behind amnesia, short-sighted politics and working from a consensus.

A large part of his speech was devoted to detailing aspects included in the Catalan government plan that the executive approved last Tuesday, which includes, among other proposals, an increase of 5 billion euros in the Catalan health budget in this legislature.

He emphasized that the transformation of the country that he promised in his investiture speech "is already underway", with what he described as "the new Generalitat" that must make it possible to overcome the crisis. He noted three specific decisions that his government has already implemented -   such as free education for infants up to 3 years' old, the new decree law on renewable energy that the government will pass next month, and the proposed budget which will provide, thanks to resources from the resilience funds, an increase of 3.5 billion euros over the last budget passed in Catalonia.

In relation to the management of the pandemic, he stressed the effectiveness of vaccination and the work carried out by the health professionals. He set out as a challenge the need to increase the percentage of people vaccinated, and for that reason he addressed young people in Catalonia directly, appealing for them to get their vaccine jabs. However, he admitted the government's mistake of expecting a better response in recent weeks from those population sectors that have yet to reach high vaccination levels - a miscalculation which led to more vaccines being requested than have ended up being administered.

In the main image, the Catalan president, Pere Aragonès, during his speech in the general policy debate / Montse Giralt