Aragonès, resolute over independence referendum: "It's the most inclusive proposal"

The first institutional message from the Catalan president, Pere Aragonès, on the occasion of the Catalan National Day, the Diada - and still waiting to confirm the date for next week’s dialogue table meeting with the Spanish state - has had Catalonia's self-determination referendum as a clear protagonist. "We will defend the referendum because we know that it is the most inclusive proposal to resolve conflicts such as the one we are experiencing," said Aragonès, guaranteeing that, for him, it is an "indispensable commitment" to hold a referendum in Catalonia "as Scotland has done and will do again”.

The president argued that this is the most inclusive formula "because it allows all options to have a chance to win" and obliges all parties to make a proposal for the country and defend it on equal terms. "All options must have the right to win and we must all accept the result," he said in a speech that specifically reached out to those who are not independence supporters.

At the Hospital de Sant Pau

The president did not deliver the speech from the government's Generalitat palace, but from the Catalan architectural jewel of the Hospital de Sant Pau, in recognition of the health professionals who have been fighting against the Covid pandemic for many months.

Aragonès dedicated words to those who have been affected by the pandemic and to the public workers who have toiled to combat it, and admitted the profound social, economic and emotional crisis that the pandemic has unleashed. 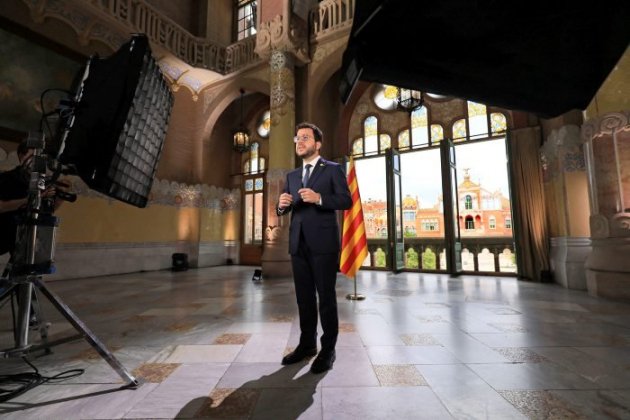 A commitment that cannot be renounced

The crux of his speech, however, arrived in the final minutes, which he devoted to the dialogue table with the Spanish state, created to address the political conflict. The president called for an alliance between institutions, parties, civil society and citizens, to make inevitable the holding of a referendum, which he described as an commitment that cannot be renounced. He would not rest until it became a reality, he declared.

It was in this context that he stressed the importance of the dialogue table scheduled for next week. "Catalonia is on the verge of doing something it has not achieved before: opening negotiations with the state, government to government, to address how we resolve the conflict," he asserted.

A vote by the citizens

The president not only reiterated his unshakeable commitment to holding the dialogue meeting but also guaranteed that there is "commitment from both parties" to submitting the result of this negotiation to the Catalan public to seek their endorsement through a vote.

Faced with the skepticism which some pro-independence sectors greet the dialogue table, including the members of his coalition partners Junts, Aragonès appealed for trust in the ability to achieve the desired result, joining forces to make possible an amnesty and the right to self-determination.

The president, who made no reference to the crisis with the Spanish government caused by the suspension of the El Prat airport expansion project, defended a four-pronged transformation of the country: social and economic; feminist; green, to tackle climate change; and a democratic transformation, which improves and modernizes governance, and in which "majority support by citizens for an amnesty and self-determination" would be a key framework.