The arrest warrants issued by Spanish judge Pablo Llarena against the Catalans in exile has put the issue of Catalonia on the European agenda for the first time. The arrest of president Carles Puigdemont in Germany and proceedings against minister Clara Ponsatí in Scotland have changed the situation, and ended for good the idea it's a purely internal Spanish affair. Now there are more actors involved.

British newspaper the Financial Times, always attentive to the underlying developments on the continent, has warned that the Catalan case has gone from being a Spanish headache to the very heart of the international scene. And it's ended up doing so in Germany, the largest country in the EU, the lookout always watching the south, stunned, and in the United Kingdom, specifically in Scotland, the second focus of pro-independence activity in Europe. 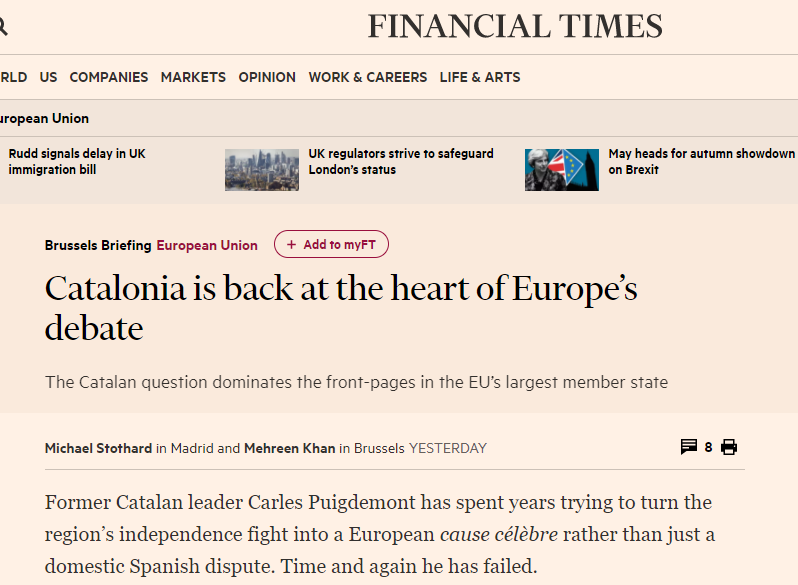 President Carles Puigdemont had not yet managed for the Catalan procés (the independence process) to stop being so clearly considered simply an internal Spanish problem. But the risky bet made by the "government of judges" (in the words of former Spanish PM Felipe González) in taking the debate to Europe has started to make it visible. The Spanish media bubble has burst abroad, the promise of a fast-track extradition hasn't turned out and they're having to revise it on a daily basis, and the accusations that Spain has fallen into authoritarian practices have spread like an oil slick.

If Germany doesn't extradite Puigdemont in the end, the president's political victory will be emphatic, because it would imply the largest European power undermining the Spanish state to the sound of international applause. And if Pablo Llarena senses it coming and opts for withdrawing the warrant, as he did last year with Belgium, it would give a clear show of impotence. If he manages to get the extradition to go ahead, it will be with a mobilised independence movement which has captured international media attention.

With all the options, Spain is sending the signal it can no longer sort this alone, after promising its EU partners that it would end with the Catalan conflict with last year's election which was meant to see Inés Arrimadas become president.

The New York Times, which has won more Pulitzer Prizes than any other paper, puts this explicitly: "Spain, unable to beat Catalonia at the polls, takes fight to Europe". The image given off by the Spanish government is currently one of weakness and contradictions. 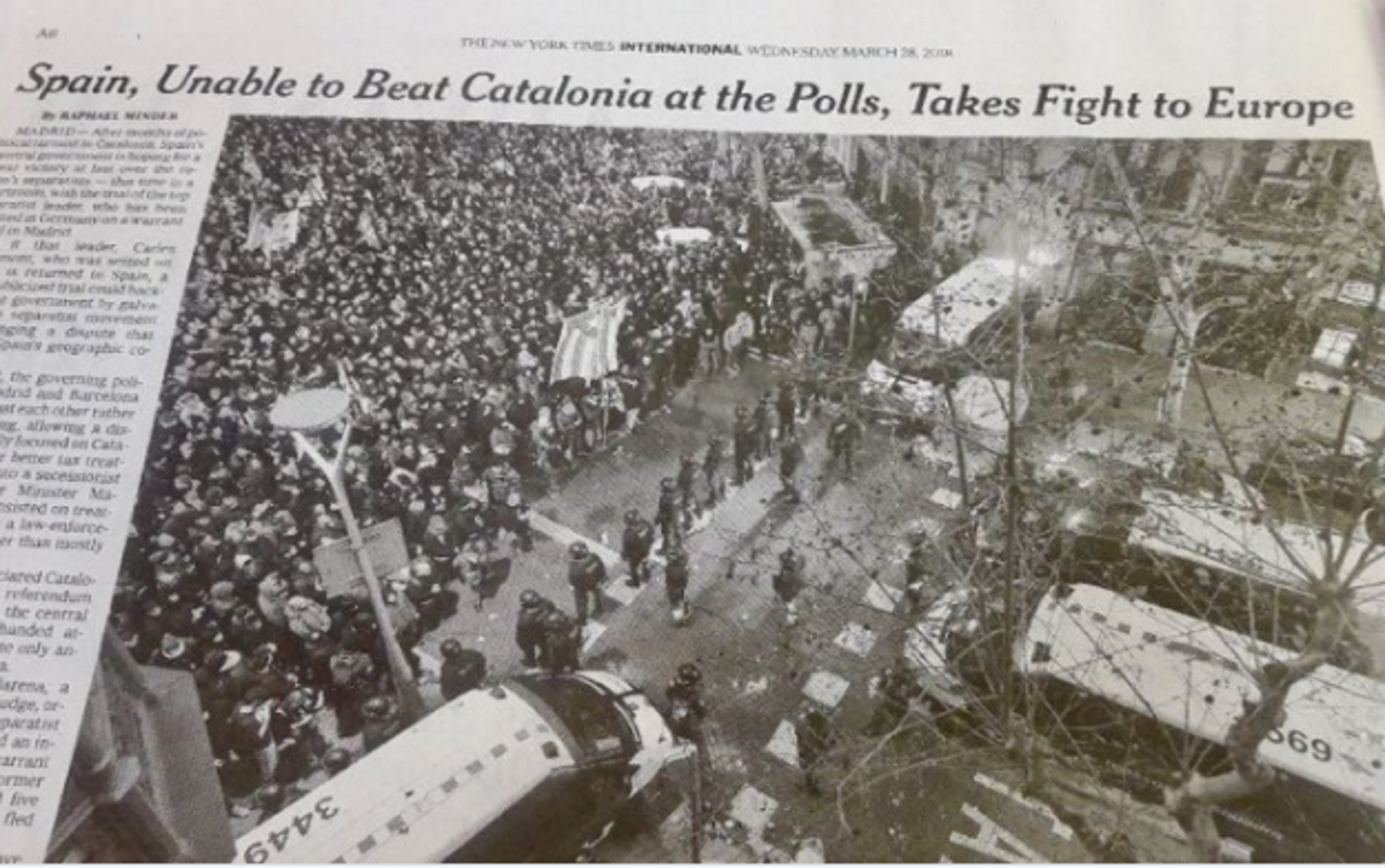 Puigdemont's lawyer in Germany, Wolfgang Schomburg, is aware of the inherent geopolitical implications and is directly putting pressure on Berlin's commitment to democracy. He calls on the German government to recognise that it cannot extradite for political crimes and if he wins (an option not discounted by outlets from Süddeutsche Zeitung to Der Spiegel, passing through financial paper Handelsblatt) it would mean that they discredit the "government of the judges".

The Puigdemont affair led, the very day of his arrest, to a telephone conversation at the highest levels of the German government, involving justice minister Katarina Barley, foreign minister Heiko Maas, the head of the chancellery, Helge Braun, and Hans-Georg Engelke, an undersecretary in the interior ministry. They decided to maintain neutrality over the legal process, nor would they use their right to veto whatever the final decision of the courts is. It's a decision which reveals extreme caution at the highest levels.

For what will happen, time will tell, but for the moment, Puigdemont's arrest has caused more debate than any other in Germany for decades and the topic of the Catalan political prisoners has come up in places like the Parliaments of both the UK and Portugal. Le Monde has published a manifesto from French and Italian intellectuals calling for the prisoners' release. The independence movement has started to attract sympathy in countries that had so far been cold towards Catalan claims.

Spain has lost the battle to avoid talk of "political prisoners" at an international level, Puigdemont's arrest being the spark for shows of solidarity. From Scottish MEPs, both pro-independence and pro-union, to 55 Flemish MPs. The trickle is growing and could last many weeks.

Spain is taking a great risk taking its legal persecution to Europe, a high-stakes, high-cost bet. It has unleashed an international response of solidarity against the official Spanish narrative. Some engagé observers, like the philosopher Fernando Savater and the writer Arturo Perez Reverte, are starting to express regret over it, perhaps senses the magnitude of what could happened with the actions of the "government of judges" and the Spanish executive sheltered behind.

Translation: "Washington Post, The Times, Le Monde, questioning Spanish democracy. More than the Catalan problem, what terrifies me is the incompetence of this government of inept mediocre [people]. Its inability to dismantle abroad the campaign to discredit the Spanish state."

Former Spanish foreign affairs minister, José Manuel García-Margallo, warned some time ago that the procés would be decided on the international stage and that it had to be taken on with that in mind. But prime minister Mariano Rajoy never paid him much attention, beyond closing Diplocat (Catalan Diplomacy Council) and the Catalan delegations abroad with article 155 of the Spanish Constitution.

Now, Spain is betting everything on Germany extraditing Puigdemont, but has discovered it can only achieve it (and then it's far from certain) by paying the price of the conflict moving onto the international stage. That's the path the "government of judges" is going for. If extradition is refused, or only conceded for lesser charges, that process will stall. In any case, Catalonia is now definitively on the map.

Referendum Investigation 'Der Spiegel': "Nothing better could have happened to him than his arrest" Lluís Bou