French daily Le Monde has published a manifesto signed by French and Italian intellectuals calling for the liberation of the Catalan political prisoners. "We, citizens of Europe, ask for the immediate freedom of the Catalan citizens imprisoned for their political views", it states.

The manifesto is supported by writers such as Erri de Luca, Jean-Marie Laclavetine, Daniel Pennac and Roberto Saviano. According to the text, the prisoners are accused of rebellion and subversion, and risk prison sentences of 30 years, "without even picking up a single stone to throw".

It adds that those who subscribe to the manifesto are not speaking about the independence of Catalonia, either for favor or against. "For us it is about defending European citizens who have been imprisoned for being keeping their word".

"Why are we focusing on Catalonia and not Turkey? Because Catalonia is a land within Europe and we believe we live in a laboratory of democracy. Because the experience of arresting representatives chosen by the popular will, threatening them with exemplary sentences for their political ideas, must be rejected by the laboratory of Europe", says the declaration.

According to the manifesto, the repression of minorities must not be acceptable in our common space. "Opinions and convictions are to be discussed, they are not to be put in in prison", it concludes. 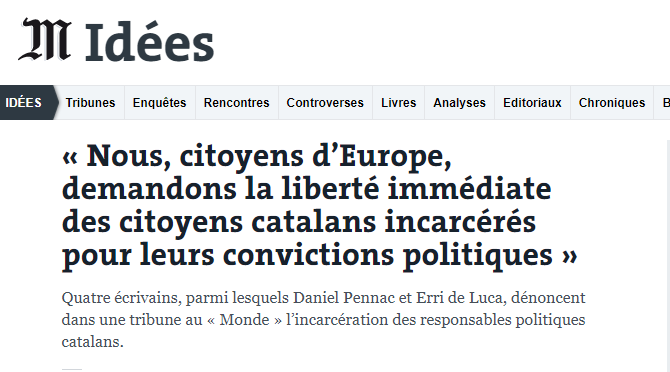