Ciutadans had everything ready for a large party this Thursday in Barcelona. First, to celebrate their victory as the party with the most votes in their neck-and-neck race with ERC and JuntsXCat. Second, to celebrate a potential alternative government. But, in the end, only the first was possible, as they won 37 seats, a gain of 12. The pro-independence parties, with president Puigdemont's surprise factor have managed to revalidate their absolute majority in the Catalan Parliament with 70 deputies. Inés Arrimadas's party ended up bitter in the knowledge it's impossible for her to become president.

"For the first time, a pro-Constitution party has won in Catalonia and it's been Ciutadans", celebrated Inés Arrimadas, who thanked the confidence 1.1 million voters showed in her. She made special mention of those who said they would disappear, that they had no future. "Today one in four Catalans has trusted in this party which speaks without complexes," she said. 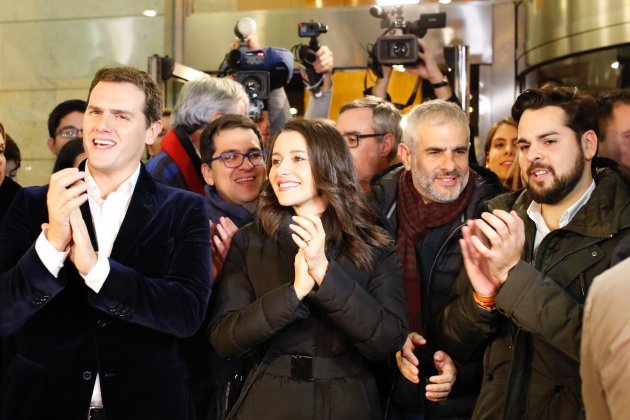 The candidate listed some of the most-populous Catalan cities, where Ciutadans came first, starting with Barcelona and continuing through l’Hospitalet de Llobregat, Badalona, Cornellà, Lleida and Tarragona. Aware of lack of ability to form a government, she blamed and "unjust electoral law" which hasn't changed in 40 years.

Everything was in place for the celebration, following a campaign aiming for the presidency. The party's leadership followed the election from Hotel Catalonia in Barcelona's plaça d'Espanya and had set up a large stage across the roundabout on avinguda de Maria Cristina with music, food trucks and Ciutadans flags and contained euphoria. "We're very happy with the turnout. Let's see if we manage to turn the situation around", said the party's national leader, Albert Rivera, as he arrived with a smile he couldn't keep in. Arrimadas was slightly more cautious: "We're very excited, but we have to wait for the results".

The initial euphoria was dampened as the count progressed and the results were confirmed: pro-independence parties had kept their absolute majority in the Parliament. Any aspiration's the party's leader had were stopped dead: she doesn't have enough seats to form any type of "alternative majority" to the independence movement. Some hundreds of party members and supporters had headed to plaça d'Espanya with a range of emotions. 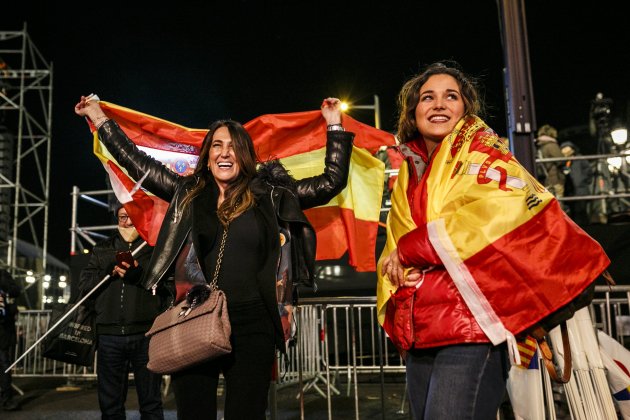 There was a small moment of celebration on the stage, in the middle of the speeches, as the party rose from 36 to 37 seats. The crowd celebrated with cries of "I'm Spanish, Spanish, Spanish" and "president", directed at Arrimadas. But it turned out this deputy didn't come from the pro-independence parties, but from PP, who fell from 4 to 3, behind CUP. Despite the renewed pro-independence majority, Arrimadas promised "to keep fighting, with more votes, more seats and more support".

"If we already knew that the [independence] process had no future yesterday, today it's even more clear that the process doesn't represent a future for all Catalans," she said. Arrimadas also warned that "nationalist parties will never again be able to speak in the name of all Catalans".

Albert Rivera accompanied Arrimadas throughout the whole night. "She should be president of Catalonia," he said. He thanked all those who had never before voted in parliamentary elections or who had changed their vote to his party.

Nonetheless, especially after the blow against Xavier García Albiol's PP, which didn't manage to capitalise on the article 155 measures declared by their national leader, prime minister Rajoy. Rivera gave broad comments on Spanish politics: "In the same way that we've beaten them, we'll defend a project in Spain. Spain has to defeat nationalism at the polls like we've done". His party's supporters responded with shouts of "president". A very pointed message to Rajoy.