Torrent denounces Spain's "authoritarian drift" to the Council of Europe

The speaker of the Catalan Parliament, Roger Torrent, has told the European continent's leading human rights organization, the Council of Europe about the Spanish state's "repression" and "authoritarian drift", including the judicialization of politics which affects the Catalan chamber and all the institutions of Catalonia.

He gave his complaint in a digital connection this Wednesday with the assembly of the Council's Monitoring Committee for the Respect of the Obligations and Commitments of Member States centred on the political situation in Catalonia with regard to fundamental rights. In a subsequent press appearance, the parliamentary speaker explained that at the meeting he had conveyed to the representatives of the other European parliaments that Spain's attitude "limits" fundamental rights, in "obvious repression" of political and social leaders of Catalonia. 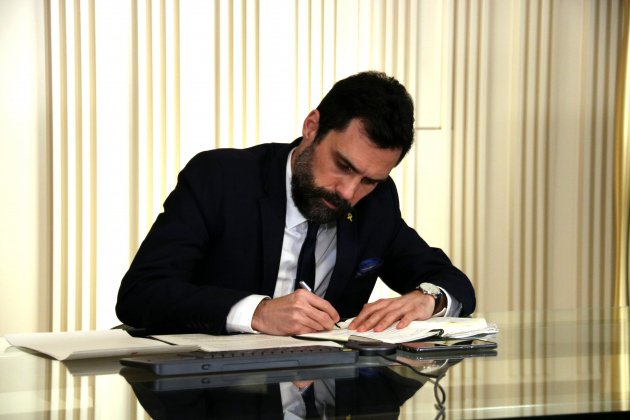 Torrent, before beginning his speech at the Council of Europe / Photo: ACN

The Council of Europe is an international organization created in Strasbourg by the Treaty of London on 5th May, 1949, and its 47 member states include the EU countries but also other states from Andorra to Azerbaijan, among many others. It should not be confused with the European Council, the EU body formed by the heads of state and government of European Union members along with the president of the European Commission.

The values ​​of the Council of Europe

The institution's values ​​include the defence of freedom of expression, freedom of the media, freedom of assembly, equality and the protection of minorities, and in this regard it has campaigned on issues such as the protection of childhood, hate speech on the internet or the rights of Roma people, the largest minority in Europe.

The institution also helps member states to fight corruption and terrorism, and to implement necessary judicial reforms, and has a group of constitutional experts, who meet in what is known as the Venice Commission, which provides legal guidance to countries around the world.

As well, the Council of Europe promotes human rights through international conventions, such as the Convention on the Prevention and Combating of Violence against Women and Domestic Violence, or the Convention on Cybercrime: it monitors the progress of its member states in these areas and issues recommendations through independent and specialized monitoring bodies.