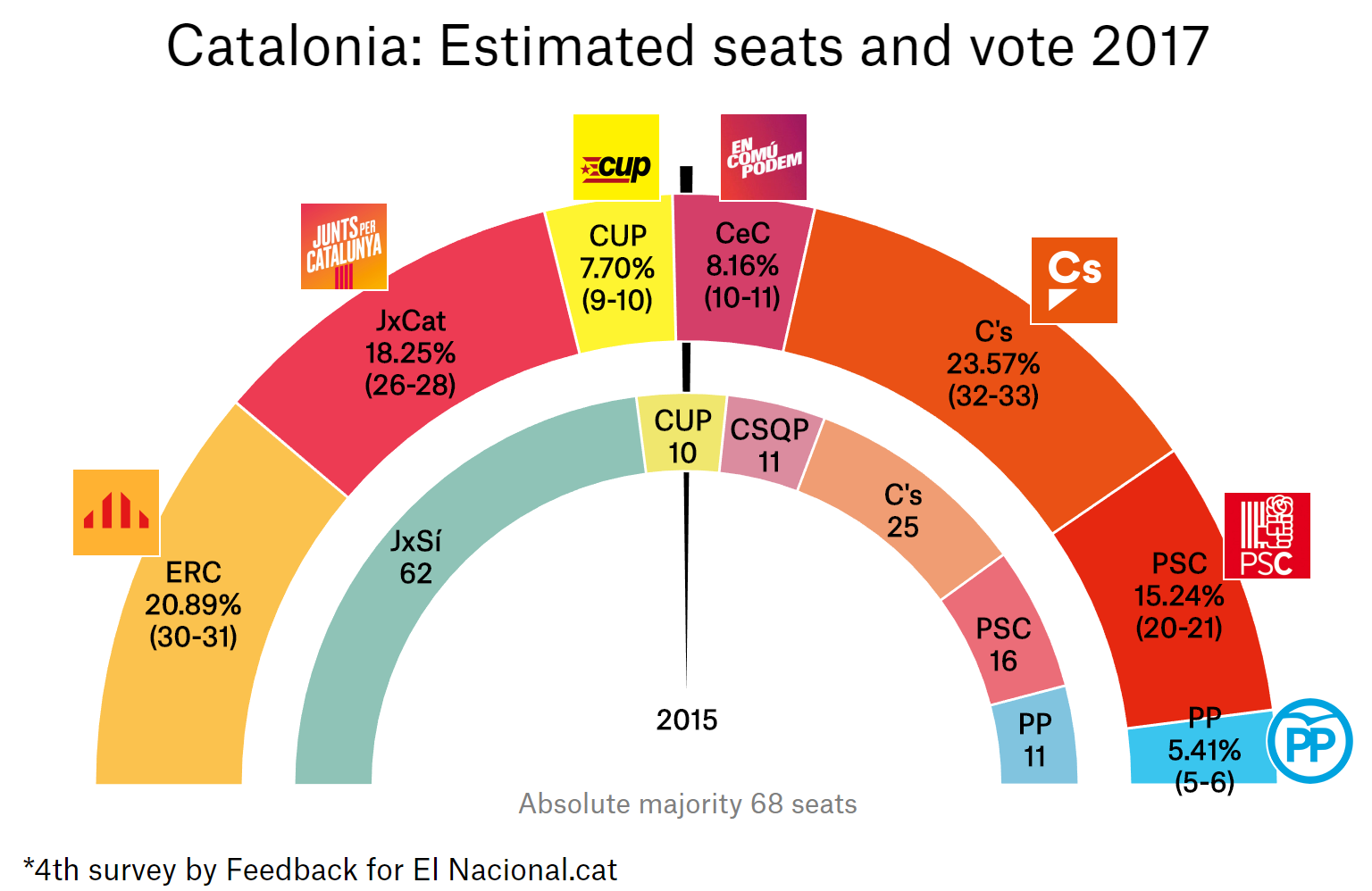 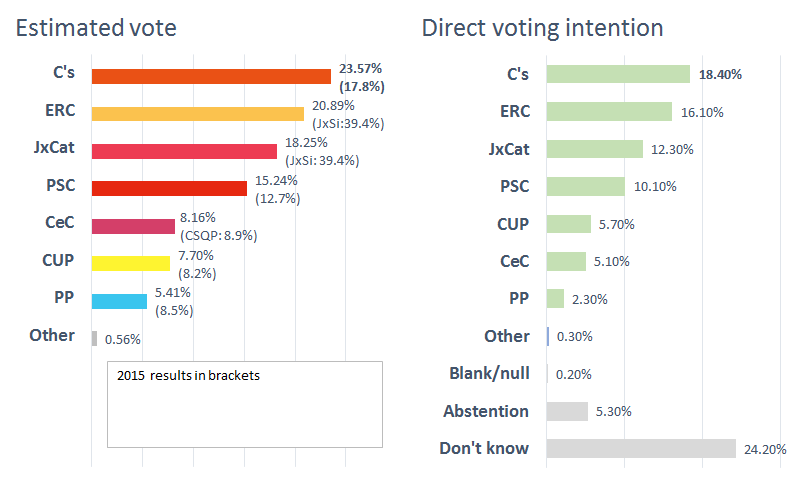 The election campaign for 21st December reaches the halfway point with a change of leader at the head of the race. Ciutadans (Cs), the main opposition party in the last Catalan legislature with 25 of the 135 seats, will come first in the 21st December Catalan election with 32-33 seats and some 23.57% of the predicted vote, according to the fourth tracking poll carried out by Feedback for El Nacional. Their advance is threatening the absolute majority of the pro-independence parties; ERC, JuntsXCat and CUP, who in total had 72 deputies after the last election in 2015 are now sitting in the range of 65 to 69 seats.

In the pro-independence bloc, ERC, led by imprisoned vice-president Oriol Junqueras, is confirming its downwards trend, losing the first position it had kept through our first three surveys, going from 32-33 seats in our last poll to 30-31 this time. JuntsXCat, the list lead by exiled president Carles Puigdemont, loses its momentum from the previous survey and loses support, dropping from 28-30 to 26-28 seats, although this retains some of its gains over the first and second polls.

Who's dropping and who's rising

ERC and PDeCAT, a party not standing directly this time but instead promoting the broad pro-independence JuntsXCat list, together won 62 deputies in 2015 with their joint Junts pel Sí (Together for Yes) candidacy. This time, standing separately, they would total between 56 and 59. ERC's (Catalan Republican Left) drop is to the benefit of CUP (Popular Unity Candidacy), who rise for the third time in a row since the first survey and, with 9 seats, sit just one below the 10 they reached in the last election.

On the other hand, in the pro-union bloc, Ciutadans gains speed and, for the first time, gets the victory in the tussle with the Republicans for first place with JuntsXCat losing ground on second. The party, led by Inés Arrimadas, climbs back from the 28-30 seats they fell to in the last survey, to 32-33, putting them 1 to 3 ahead of ERC. Their advance puts the breaks on Miquel Iceta's PSC's expectations who, after being predicted 21-22 seats in the third survey, now get 20-21. But, above all, Cs' growth comes at the cost of Xavier Garcia Albiol's PP, who stay in last place, apparently not yet having hit the bottom, with 5-6 deputies (6-7 in the previous survey).

Between the two blocs, against both independence and central government intervention in Catalonia, Xavier Domènech's En Comú recovers somewhat after the losses they suffered in the first week of the campaign which threatened to have them end up drawing with CUP. This poll puts them up to 2 deputies up on the last one, going from 9 to 10-11, close to repeating predecessor Catalunya Sí Que Es Pot's 11 seats from 2015.

The prospects for governments after 21st December are quite different from those sketched out by our third survey, in which the three pro-independence parties benefited from a certain "Brussels effect", the rally which saw 45,000 Catalans head to the Belgian capital, giving them an absolute majority in the new Parliament with 69-72 seats. Now that has reduced to 65-69, the lowest of any of the four surveys we've published so far. 68 deputies are needed for a majority.

That said, the pro-union bloc, despite making considerable advances, hasn't got enough either to forge an alternative majority. The total between Cs, PSC and PP remains, in the best case, 8 seats short, with 57-60. In other words, Inés Arrimadas' party might win, but it will be difficult for her to become president of Catalonia, given the improbability of Xavier Domènech's coalition voting to invest her.

Nor does the left-wing coalition proposed by Catalunya en Comú-Podem seem to have a great chance of coming about. ERC, PSC and Catalunya en Comú-Podem themselves would total 60-63 seats, more than the pro-union bloc, but less than the pro-independence side. In any case, Domènech could hold the key to the new Parliament, according to our survey: it will be difficult for a pro-independence government to form without his approval.