The door to Europe has opened. Spain's Constitutional Court has this Thursday rejected the appeal for constitutional protection from the former speaker of the Catalan parliament, Carme Forcadell, with regard to her sentence in the Catalan independence leaders' trial. That court verdict, from October 14th, 2019, sentenced her to eleven years and six months of imprisonment and disqualification from office for a crime of sedition. The court's ruling effectively endorsed the sentence and thus gives Forcadell a green light to appeal the case at the European Court of Human Rights in Strasbourg.

The Constitutional Court has not yet published its full ruling. It merely issued a press statement explaining that the decision, drafted by reporting judge Ricardo Enríquez "rules out, among other issues, that the plaintiff's action as speaker of parliament is protected by the prerogative of inviolability" included in article 57.1 of the Statute of Autonomy of Catalonia.

Path already taken by four of the prisoners

According to the judges, article 57.1 "cannot give protection to actions by the chamber or its organs that are an expression of a mere de facto power, completely outside the right and exercise of the functions that are constitutionally and statutorily entrusted" to Parliament. The full judgment, as well as the individual votes, will be released within a few days.

The Constitutional Court's resolution opens the door to the Forcadell's ability to take the case to the Strasbourg court, as Jordi Sànchez, Jordi Cuixart, Josep Rull and Jordi Turull have already done. "No surprise. The road is open to the European Court of Human Rights," she acknowledged on Twitter. This, on the same day as some other good news has arrived for Catalan cases on the continent: the Constitutional Court of Belgium has this Thursday overturned the country's law of insults to the crown in connection with the extradition case against rapper Valtònyc. 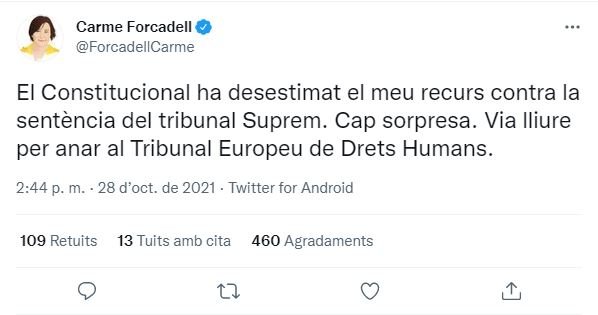 A decision that was not unanimous

Notably, the judges were not unanimous in their decision, but voted by a majority, with two members of the court, the progressives Juan Antonio Xiol and María Luisa Balaguer, announcing a dissenting opinion, as the same judges did in the cases of other pro-independence leaders which they have already considered. It should also be noted that the judges have resolved Forcadell's appeal just before the renewal of the composition of the Constitutional Court agreed by the PP, the PSOE and Unidas Podemos.

It is a week with no shortage of controversial decision emerging from the constitutional chambers. On the one hand, the court has today accepted Vox's appeal against the Catalan Parliament majority argument asserting that the far right party was not entitled to another seat in the senate. On the other, the Spanish government's second state of alarm, enforced for six months last winter as part of the Covid-19 measures, has been ruled as constitutionally invalid. As well, it has repealed part of the law on municipal capital gains tax, the only tax on real estate speculation and one of the main sources of revenue for municipalities.

Main image: The President of the Parliament Carme Forcadell / ACN