Imperiali, the formula that means Catalonia won’t give a Senate seat to Vox

The entry of Vox into the Catalan Parliament in February's election has caused a serious shake-up in the Catalan chamber and the pro-independence parties. The left-wing Comuns are, to the extent that it is possible, determined to neutralize the action of the eleven far-right deputies. Under the terms of the anti-fascist pact signed in the first days of the legislature, these parties have been busily searching for the necessary legal backing to prevent one of the eight senators which Parliament must appointed to the Spanish upper house from being a Vox representative. They believe they have found their argument in the Imperiali formula, a variant of the d'Hondt law under which seats are allocated in proportional representation systems.

Applying this calculation method to the results of the 14th February election, the distribution of the senators appointed from Catalonia would be as follows: 3 for the PSC, 3 for ERC and 2 for Junts - that is, the three largest parties would win Senate seats. This was approved by the parties committee, which met this Tuesday at noon. The proposal was presented by ERC spokesperson Marta Vilalta and has the endorsement of ERC, Junts, the CUP and the Comuns. The decision inflamed the mood of the meeting and met with head-on opposition - but insufficient votes - from the PSC, the PP, Cs and the main victims, Vox. 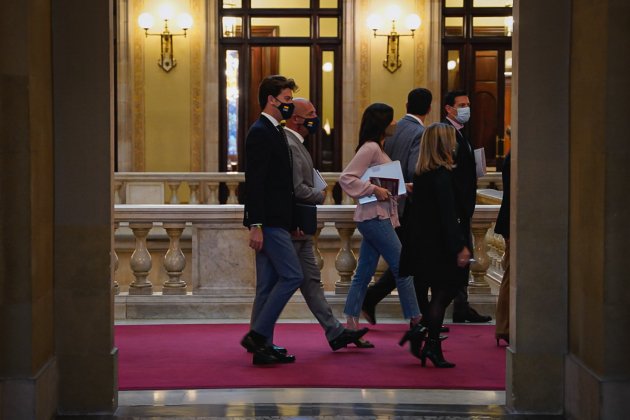 The margin for action

In fact, neither the rules of the Catalan Parliament nor the specific law governing the appointment of senators determine what method the parties' committee must use to distribute the available places on the Spanish senate, a body whose members are in part directly elected by voters, and in part indirectly chosen, through the autonomous parliaments. The rules only make it explicit that the decision must be proportional. This description provides the margin which the groups in the sovereignist bloc have used to impose the cordon sanitaire against Vox, after the Socialists of the PSC went lukewarm on the pact, with the argument that it was not advisable to feed the victimism of the far-right or set precedents that could lead to minorities being silenced. The three pro-independence parties and the left-wing Comuns criticized the Socialists for violating the anti-fascist decalogue after they signed it at the beginning of the legislature.

In any case, and although Vox is threatening to take the matter to the Constitutional Court, all sources consulted agree that it is unlikely that a successful challenge can be mounted.

The CUP also loses a senator

It will be the first time that the Catalan chamber has adopted this mechanism to distribute the eight senators it elects indirectly to the upper house. The system of largest remainders has usually been used, and on some occasions they have been assigned from the d'Hondt method. If either of these two systems were applied, one of the senators would have been assigned to Vox, fourth largest party in the Catalan Parliament.

Under the largest remainders system, the PSC would have received two seats, ERC two, Junts two, with one each for Vox and the CUP. Thus, by not insisting on this option, the CUP have given up a place on the senate to block the entry from the far right. Under the d'Hondt method, there would have been three for the PSC, two for ERC, two for Junts and one for Vox. To avoid this, the Imperiali variant was chosen.

The groups opposed to the use of this calculation method describe the attitude of the sovereignist bloc as totalitarian and accuse them of being undemocratic. Spokespeople for Cs, the PP and the PSC expressed views along these lines. Despite disagreeing, however, they refused to go further and have ruled out going to court to reverse the decision. In fact, not even the parliamentary lawyers commented on it.

A judicial offensive has, however, been announced by the affected group. As already promised last week, the Vox spokesperson explained today that his group will appeal to the Constitutional Court to claim its electoral right to obtain a senator through the Catalan Parliament, once the appeal route within the chamber itself is exhausted. In parallel, they will study possible legal claims for abuse of office against the members of the Bureau who endorsed it. They have labelld the decision as an "imperial swindle."

In the main image, Laura Borràs in the Bureau of Parliament / Pau de la Calle