Aragonès sworn in as Catalan president: "Let's hold our heads up again"

During his inauguration speech on Friday, he promised a profound “shake-up”. For the moment - while waiting for his government to start taking action - this phrase has been applied to this Monday evening's formal act in which the new Catalan president was sworn in. Pere Aragonès's team designed an event intended to mark a clear break with the past. The red carpets were removed and a decoration based on wood textures was chosen. The intention: to highlight the generational change and make good the ERC campaign motto, "At the people's side". Awaiting the new president in the vestibule of the Generalitat palace were representatives of key public professions who have been at the forefront of the fight against Covid-19. "Today is the beginning of a new phase," said the 132nd president of the Catalan governmental institution during his speech, in which he affirmed the goals of fighting inequality and achieving self-determination and an amnesty. When taking his vow of office he avoided any mention of the Spanish constitution. The whole ceremony lasted half an hour. 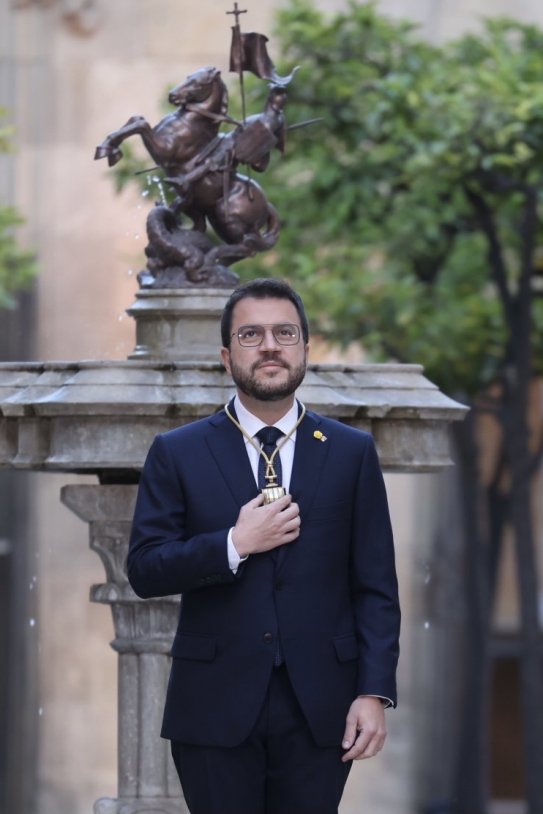 At a quarter past eight in the evening, holding the hand of his daughter Claudia, Aragonès arrived at the Palau de la Generalitat in Barcelona's Plaça Sant Jaume. Before entering, he left a carnation on the commemorative Stolpersteine cobblestone installed a few feet from the entrance to the palace on October 15th, 2020, on the occasion of the 80th anniversary of the execution of Catalan president Lluís Companys. The ERC leader's route also took him past a series of panels featuring large images of the eight vegueries which make up Catalona, and he also inspected a contingent of Mossos police, dressed in ceremonial uniform.

Taking over from Torra

The most awaited, most symbolic moment was in the palace's central orange-tree courtyard, the main setting for the ceremony, when Quim Torra placed the presidential medallion on his successor's houlders. Since September 2020, when president Torra was disqualified from office for hanging out a banner that called for the release of the pro-independence political prisoners, Aragonès has held his post - in an acting role. Today all the adjectives have been removed. He is now simply: president. And as such, he wanted to thank his predecessor "for his dedication to the country during some extremely difficult years, in which he had to face the challenge of recovering the Catalan institutions, he had to face a pandemic unprecedented in the history of humanity and ended up suffering an unjust disqualification from office".

Aragonés reiterated his commitment to "making an amnesty and self-determination inevitable" and his "inescapable priority" of working for "the happiness of the citizenry." "We need to clear the way ahead, while being well aware that those who open the path are usually the ones who get the dirtiest. But it's time to roll up our sleeves without fear of scratches. It's time to put all of ourselves into the job." And he opened a sliver of hope. "The blow we've had is great and for too long it has not let us move forward. That's why the country needs to hold its head up again, and open up a new phase. We need to do so urgently. Without further delay."

The prisoners and Iceta

In front of the stage, the new president's family watched and listened, as did prominent Catalan political leaders. A total of around forty people witnessed the ceremony, to comply with the limitations dictated by the pandemic. From the speaker of parliament to the mayor of Barcelona, ​​to the former Catalan presidents Torra, Mas and Montilla. Also present were three of the prisoners - Oriol Junqueras, Jordi Sànchez and Jordi Cuixart - who were able to obtain leave to attend. And the subject of morbid fascination: that two representatives of the Spanish government were present among the guests, something which did not happen with the 2018 inauguration of Torra. They were the Spanish government's senior delegate in Catalonia, Teresa Cunillera, and the territorial minister, Miquel Iceta, also leader of the Catalan Socialists. Iceta, who has never wanted to visit the jailed politicians over the years - while some of his colleagues like Montilla and Collboni have done so - was just a few metres from Junqueras, who from the first day reproached the Socialist for his lack of empathy. 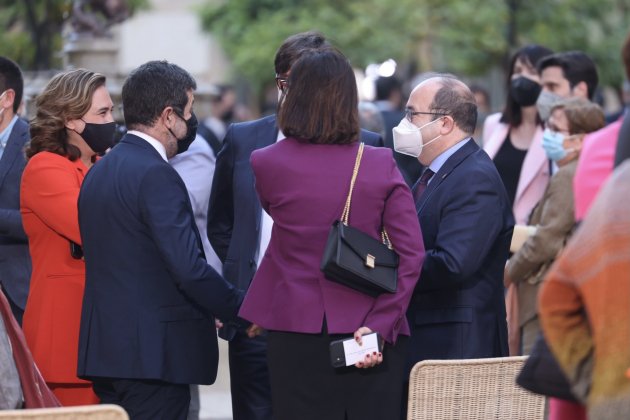 The names of the new ministers

The new Catalan government led by Aragonès will be structured into 14 ministries, seven for the ERC party and seven for its coalition partners, Junts; seven men and seven women. The final list of names will be officially announced this Tuesday, but virtually all have been leaked over the past few days. Over the next day the new president will meet with each of them to put them in place for the new legislature. On Wednesday they will be sworn into office and start work. Of the eleven already confirmed, five are independent and four are former mayors.

Two of the most surprising have been the economy portofolio, which will be held by the former director of banking giant La Caixa, Jaume Giró, who was proposed directly by Junts' Jordi Sànchez, and the job of interior minister, a hot potato which for the first time passes into the hands of ERC, who have chosen an independent to fill the role: the ex-Socialist lawyer and former mayor of Vilanova i la Geltrú, Joan Ignasi Elena. The two positions that were taken for granted from day one are the former mayor of Santpedor, Laura Vilagrà, who will be the minister for the presidency, and Josep Maria Argimon, until now public health secretary, who will jump to the position of health minister as an independent, again at the proposal of Junts.

A few hours before the inauguration, it was announced that the lead figure for Junts in the new government will be Jordi Puigneró, who will in the end be vice president, as well as digital policies and infrastructure minister. In other words, he expands the functions of the ministry he already held with Torra and adds the vice-presidency - a role usually paired with the economy portfolio, but which has been split off this time after Junt's Elsa Artadi - who was picked to hold both positions - declined to be part of the government.

Apart from Puigneró, only one other minister from the Torra government has been confirmed to continue in their present job. This is Teresa Jordà, former ERC mayor in Ripoll, who will continue at the head of agriculture, and now with the additional job of climate action. Another who was already taking part in the previous executive, as number two to education minister Josep Bargalló, Josep Cambray, will take his boss's old job on behalf of ERC.

Among the five independent ministers, apart from Giró, Elena and Argimon, will be the foreign action and transparency ministry, which will be in the hands of Junts and will be held by the former Catalan government delegate to the US, Victoria Alsina, a more technical than political profile. Meanwhile, ERC has appointed the political science professor and former electoral commissioner for the 2017 referendum, Tània Verge, to run the newly created portfolio of equality and feminisms.

One of those who knew from the outset that he would have a seat on cabinet was Roger Torrent. The former speaker of parliament will be in charge of the business and employment area. Culture will be for Natàlia Garriga, who until now worked in the vice-presidency team with Aragonès. Gemma Geis of Junts will be the new head of universities and research, Violant Cervera will take on social rights and Lourdes Ciuró will be the minister of justice.

Acting as a spokesperson for the Catalan government is often an thankless task, but at the same time it is a forum for public projection. For the first time in a decade, this role will no longer be in the hands of a minister. According to several sources in ElNacional.cat, the new Pere Aragonès executive has chosen a woman from the communications sector to be the day-to-day voice of the government, repeating the formula used by the Montilla government in 2007 with journalist Aurora Massip.

In the main image, Torra places the medallion on Aragonès's shoulders. / S. Alcazar