Quim Torra, thrown out: Spain sacks the second Catalan president in a row

The decision that Spanish justice was due to make was already an open secret, and finally this morning it has been confirmed. Spain's Supreme Court has ratified the sentence against Catalan president Quim Torra and accordingly he will be removed from the presidency in the coming days. The court has decided that it is correct for Torra to be disqualified from public office for 18 months and fined 30,000 euros for a crime of disobedience. The 133-page ruling ratifies that - in a way that was "intractable and stubborn" - he disobeyed Spain's central electoral body, which is tasked with ensuring the neutrality of public authorities in elections, the text says. The focus for his disobedience was a banner reading "Free political prisoners" which he refused to removed from the Catalan government palace when asked.

The ruling has been made public today and, once the president himself has been officially notified, all the machinery for the replacement of Torra in the Catalan government and the electoral cycle must be set in motion with a view to the next Catalan elections in the first quarter of 2021. Quim Torra thus becomes the second consecutive president to be deposed from office by Spanish authorities, following the 2017 sacking of Carles Puigdemont by Mariano Rajoy's government under article 155 of the Spanish constitution.

Sources from the Supreme Court explain that the sentence, agreed unanimously by the court, was given the official signature this Monday at around midday and is now to be notified, first to the sentencing court, the High Court of Catalonia, and then to Quim Torra himself. The sentence, therefore, has only been immediately confirmed to the media who were awaiting developments at the Supreme Court this morning.

Thus the Supreme Court, in a unanimous ruling, has dismissed Torra's appeal and fully upheld the ruling of the High Court of Catalonia, given on December 19th, 2019. The ratified sentence convicted the President of the Generalitat de Catalunya, Joaquim Torra, for disobeying the Central Electoral Commission and not removing a banner from the balcony of the Generalitat palace during the election campaign period for the Spanish general elections on April 28th, 2019. Torra is sentenced to a year and a half of disqualification from the exercise of elective public positions, whether at local, regional, state or European level, as well as for the exercise of government functions, at local, regional and state levels.

The appeal ruling, decided by five Supreme Court judges with Juan Ramón Berdugo as spokesperson, argues that the scope of the appeal "is not the display of certain symbols or banners of a certain political option, but their use in electoral periods disobeying the provisions of the Central Electoral Commission which, in the exercise of its functions guarantees the transparency and objectivity of electoral processes, had prohibited its use". The usage of the banner was "in violation of the principle of neutrality to which administrations in general must be subject, violating orders express of that Electoral Board ".

The court emphasizes that the decisions of the Central Electoral Commission did not violate Torra's rights to ideological freedom and freedom of expression. It insists that "the purpose of the appeal hearing is not to analyze the appellant's conviction from the perspective of freedom of expression, since, as a citizen, he is free to carry out demonstrations or actions that reflect his political identity. The subject is the disobedience of the repeated orders of a constitutional body whose function is to guarantee the transparency of electoral processes which the neutrality of the powers and public administrations demands".

It adds that "the requirement of neutrality from the public administration is exacerbated in election periods," and cites its jurisprudence to emphasize that "free suffrage" means proclaiming as an essential festure of true democracy the establishment of an electoral system that guarantees an institutional framework of neutrality in which citizens can, with absolute freedom, without interference from any public power, decide the terms and scope of their political participation".

The Supreme Court notes that Torra "at no time, before, during and after the trial, has denied that banners and other symbols were displayed on buildings dependent on the Catalan government, especially on the façade of the government palace, nor has he denied his refusal to comply with the orders of the Central Electoral Commission", although the appellant alleged that these were illegal orders and that they violated his freedom of expression.

The Supreme Court notes, in view of all it has been studied, "the strong, repeated, intractable and stubborn resistance of the accused to abide by a ruling vested with authority and dictated in accordance with the law." The court considers that in addition to disregarding the instruction of the electoral commission, Torra displayed a conscious will and an unequivocal disposition to contravene the instruction. The sentence details that the malice involved in his act did not consist in wanting to commit a crime of disobedience, but in wanting to defy the order of a higher authority.

The court endorses his disqualification from the exercising of elective public positions and adds that the appellant has been sentenced in his capacity as a public authority - one who held a position of a political nature - for openly refusing to comply with an order issued by a superior authority, "in this way imposing his will ahead of the mandate of the agreements of the electoral commission." "The court considers that the penalty of disqualification from office - which is foreseen as the main penalty for the aforementioned offence - has to cover any situation in which the crime is committed."

Not removing Torra "would be a mockery"

The sentence explains that it is obvious that when the crime of disobedience (article 410.1 of the Spanish Penal Code) is committed in a public position of a political nature, such as that of the president of an autonomous community, "it would constitute a mockery of the respect that the aforementioned citizens have for the proper functioning of public powers that the disqualification penalty be limited to the specific position in which the crime was committed" - thus justifying the ban on Torra from holding any public office, not just the presidency of Catalonia.

Moreover, in line with the doctrine of the Spanish Constitutional Court, the Supreme Court has ruled that convicting someone for a crime against the public administration (under Penal Code article 410.1) and yet allowing them to remain in office whether as Catalan president or another representative position, while serving their penalty, "contradicts the very nature of the main penalty established by the legislator for that crime."

The court also considers that the sentence is proportional. After analyzing its own doctrine, the court concludes that the non-imposition of penalties in other cases has no bearing on penalties imposed [in this case], since for these purposes it only matters whether the conduct punished was or was not worthy of such a punishment. The court concludes that in the specific case "it is not possible to speak of a disproportionate and unnecessary criminal reaction that deviates from the principle of minimal and last-resort intervention which recourse to criminal law must be based on in every democratic society."

The sentence also rejects the main arguments put by Torra's lawyer, Gonzalo Boye. In relation to the allegation that the Central Electoral Commission was not competent to make the decisions that led to the conviction for the crime of disobedience, the court affirms that all is in order: the competence of this body "is in accordance with the electoral system" and that the order "was issued by a competent body," which under Spain's electoral law has the power to resolve complaints disputes during electoral periods.

It adds that the events affected the electoral period of a Spanish general election, and began when the representative of the Ciudadanos party (Cs) wrote to the electoral commission invoking its previous agreements, made in 2017, on the display of yellow ribbons, banners about political prisoners and estelada flags, ruling that they were a violation of political neutrality. "The political party addressed the commission in accordance with the electoral law. In the processing of the case, the arguments made it response by the Catalan president did not invoke the lack of competence of the Central Electoral Commission," recalls the sentence.

How did it come to this?

Just 10 days ago the appeal hearing was held on Quim Torra's sentence of disqualification from holdiig public office. That followed his trial in the High Court of Catalonia, on November 18th last year, charged with disobedience for failing to remove a banner in defence of political prisoners, during the election campaign. Despite the subsequent withdrawal of the banner, the electoral body brought the Catalan president to trial and the court convicted him.

The president's lawyer, Gonzalo Boye, defended at the September 17th appeal that a person can only be deprived of public office and political participation when it is a serious crime. "And what we have before us is not a serious crime." Boye accused the Supreme Court of being an impartial court, since some of its judges were also those who sat on the Catalan referendum leaders' trial - and the banner which is the centre of the case was a reference to them, as the judges who sentenced the "political prisoners" in question. Boye also argued that the Central Electoral Commission was not competent to initiate the case against Torra. 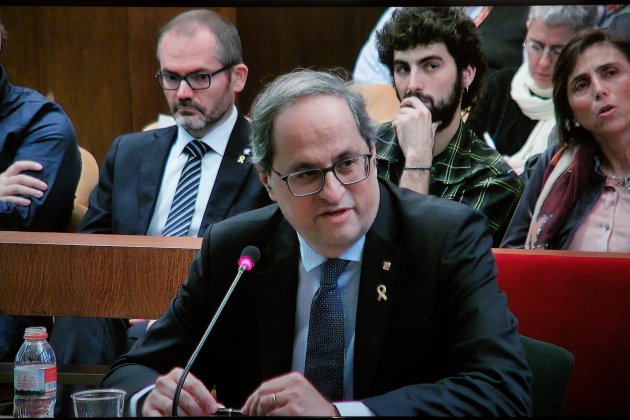 In December, the Catalan high court considered it proven that Torra refused "forcefully, repeatedly, intractably and stubbornly" to comply with the orders of the Central Electoral Commission to remove yellow ribbons and banners that referred to the release of political prisoners from official Catalan government buildings.

According to the electoral body, the message of these banners had a “partisan and inadmissible meaning in election period” and did not respect the “principle of neutrality” of that period.