In an unprecedented appearance today in Perpinyà, the last three Catalan presidents - Artur Mas, Carles Puigdemont and Quim Torra - came together to explain how all three have been targeted by the repression of the Spanish state, warning that Spain fails to comply with the European Union's founding values of respect for human rights. The three presidents stated that each of them was democratically elected as president of Catalonia, but, for peacefully fulfilling the mandate which Catalan citizens gave them at the polls, and which its Parliament selected them to lead, they were disqualified or dismissed from office.

These are the key ideas of the Perpinyà Declaration which the presidents read today, a document that severely criticises the Spanish justice system, asserting that it goes against the values of the European Union. It is not justice, say the three leaders, it is political repression. The document calls for dialogue, negotiation and international mediation to resolve the conflict with the Spanish state. 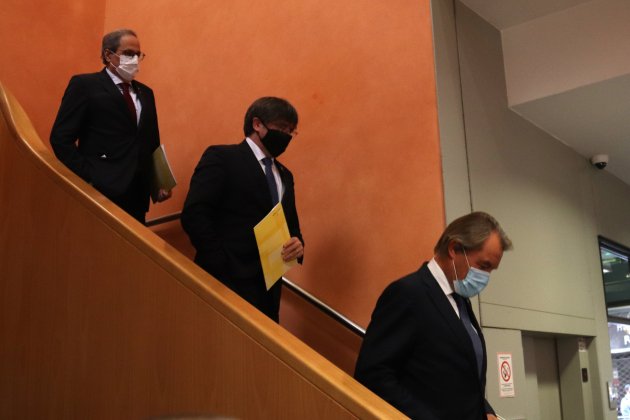 Torra, Puigdemont and Mas before their appearance in Perpignan / ACN

The repression and the monarchy

Artur Mas, Catalan president from 2010 to 2016, asked the audience to consider whether it was normal in 21st century Europe for three presidents of Catalonia in succession to receive retaliation from the Spanish justice system and described it as "absolutely immoral" that, while this is happening, Spain's king emeritus Juan Carlos I "is on the run and well protected." Mas stressed that a Europe of human rights is incompatible with Spain, a country dedicated to repression, and warned that "with this Spain, a good Europe cannot be built". In March 2017, Mas was convicted of disobedience and sentenced to a ban on holding public office for holding Catalonia's unofficial consultation on the independence question in 2014.

President Artur Mas: "This is the image: the last three presidents of Catalonia, all three of us having to face reprisals from the Spanish state."

Carles Puigdemont also affirmed that the political rights and majority decisions made by Catalans must be defended. He placed a special emphasis on the role of Spanish monarch Felipe VI, who has been visiting Barcelona today, and recalled that the king is the representative of a monarchy established by the dictator Francisco Franco. Puigdemont recalled that Felipe VI had been on the throne for six years and during his reign three presidents of Catalonia as well as two further candidates to be president, the imprisoned Jordi Sànchez and Jordi Turull, had been the victims of state retaliation. "This should make the whole of Spain and the European Union think," said the exiled president, who is wanted by Spanish justice for holding the 2017 independence referendum, but in the rest of Europe, he is not only free but also a serving member of the European Parliament.

Puigdemont: "This is shameful, for all the political chiefs who have tolerated it, fueled it or directed it."

Puigdemont summed it up like this, referring to himself, Mas and Torra: "We are part of the same party, the party of presidents who have suffered reprisals from the Spanish government".

For his part, Quim Torra emphasized that the three presidents are evidence that neither neutrality nor impartiality can be expected from Spanish justice. "Europe is all we have left, it is the place where we have [judicial] victories and recognition that the struggle we are continuing is not a dead end." Torra recalled that the 2,850 Catalan who have suffer reprisals since 2017 are an example of this intolerant Spanish democracy and he appealed to "determined persistence" to reach the goal of having the rights of Catalans respected.

On September 28th this year, the Supreme Court confirmed Torra's removal from the office of presidency to which he was sentenced for refusing to take down a banner reading "Free Catalan political prisoners and exiles".

Torra: "Europe is our only possibility... it is from Europe that we have received the recognition that our struggle is supported."

International mediation and the dialogue table

Thus, at the meeting today in the Northern Catalonia city, all three Catalan presidents called for international mediation to resolve the Spain-Catalonia conflict. While Puigdemont said that this must be demanded insistently and persistently, Mas stressed that if there is a large sovereignist and pro-independence majority, it will be easier to achieve international mediation.

The three presidents also shared a skeptical view towards the current dialogue table with the Spanish government. In this regard, Artur Mas said that he does not have confidence that it will serve to solve the conflict, while Puigdemont recalled that as of today the table has not yielded any results at all and that it only "makes sense if it is intended to resolve the political conflict".