The same sort of demonstration that is currently being tried by Spain's Supreme Court, and for which pro-independence activists Jordi Sànchez and Jordi Cuixart have spent a year and a half in jail, is what the city of Madrid has witnessed this Saturday. The Spanish capital has experienced, via the march called by the major Catalan independence groups as well as dozens of Madrid organizations, a massive protest against the "political trial" of the 2017 Catalan independence process and in favour of the immediate release and exoneration of the Catalan political prisoners. The banner at the head of the march, carried by civil leaders, made it clear: "Self-determination is not a crime. Democracy means deciding."

The protest this Saturday in Madrid, just like those that are being used as evidence for the prosecution in the Supreme Court, has been massive. According to the organizers, 120,000 people took part. More than 500 coaches and several full high-speed trains brought participants to the Spanish capital. They filled the Paseo del Prado, from Atocha station to Cibeles fountain.

The Spanish police, however, reduced the turnout figure to just 18,000 - even though the known total of those who arrived on the 520 coaches alone exceeded this "official" count. 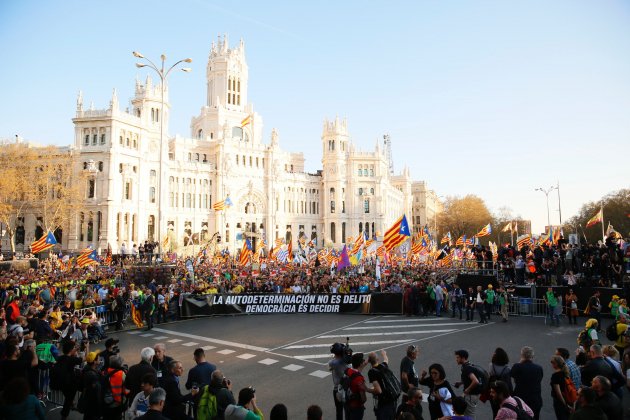 This march, like those that are being used as evidence of rebellion, was civic and peaceful. Neither beforehand nor during the protest itself was there any incident. No violence, no intimidation, and no seditious tumults.

And it was also plurinational. In Madrid's Paseo del Pardo there were plenty of Catalan estelada flags, but among them were also Basque, Galician, Canary Island and Andalusian colours.

And when the speeches began, the first voice heard was one of those not at liberty to be present in person: "I am a political prisoner, and my priority is not to get out of jail, but to expose what is happening," said Jordi Cuixart over the speakers at Cibeles. As well, the thousands of people gathered heard another of the political prisoners, Josep Rull, defending the right to protest in the face of a prosecution narrative which criminalized it. There was applause for those on trial; and there were jeers for the prosecutors, the state solicitors and the private prosecution conducted by leaders of the ultra-right party Vox. 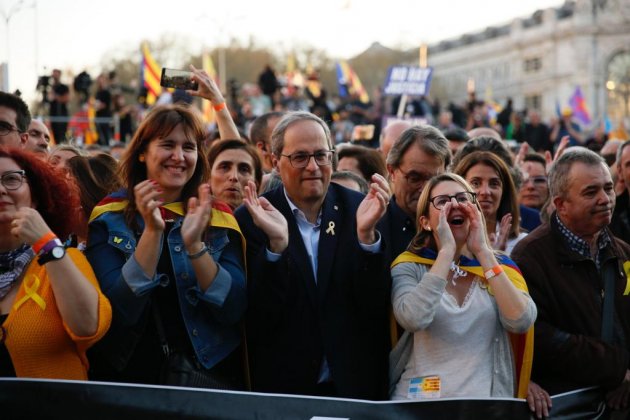 Most of the crowd's chants targeted the Supreme Court trial presided over by judge Manuel Marchena, which was labeled "a farce." But there were also calls for "unity" to the independence movement leaders present, a delegation headed by Catalan president Quim Torra and parliamentary speaker Roger Torrent, as well as former president Artur Mas. Almost all of the Catalan government attended, along with some key figures from other groups such as the deputy mayor of Barcelona, ​​Gerardo Pisarello, of the Commons.

The official start time for the protest was six in the afternoon, but more than an hour before, the masses began to gather between Atocha station and Cibeles, where they had been called by the pro-independence ANC (Catalan National Assembly) and Òmnium Cultural, along with over 50 Madrid organizations that had been involved from the first day, such as Madrileños for the Right to Decide, Madrid Anti-Repression Movement, Coordinadora 25S and Castilian Left. The hours prior to the march, as more than 500 buses arrived from Catalonia and elsewhere in the Spanish state, were incident-free. The centre of the Spanish capital gradually turned yellow. The only counter-protest was by about fifteen members of the fascist Falange, who were greeted with indifference by passers-by.

In short, the city of Madrid today witnessed an act in which people protested massively, peacefully and non-violently. Just as they did outside the Catalan economy ministry on September 20th, 2017, and as they did at the October 1st referendum itself.