An energized Junqueras: "If ERC doesn't win, it'll be those who always win"

Since April 2016, Oriol Junqueras has not attended an election rally. Pandemic restrictions prevented the jailed Catalan politician's return to the hustings from being a truly multitudinous spectacle: only a little over a hundred people were able to accompany him at the Margarida Xirgu Theatre in Badalona this Friday evening, the capacity allowed under the coronavirus regulations. So it was not the dream comeback, but in spite of everything, the figure on the stage was the Junqueras of the big occasions, with an extra dose of emotion. His presence in the campaign was the injection of energy needed by the pro-independence Catalan Republican Left (ERC) party, which he leads. Today it heard that Catalan rivals JxCat had virtually caught up with them in the polls. 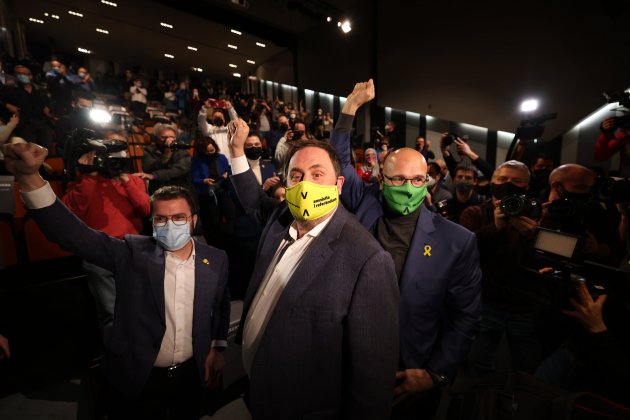 Having to deliver in front of a necessarily empty auditorium did not prevent Junqueras from recovering his appeal. True to his style, the man who was Catalan vice-president for the 1st October 2017 referendum poured winning spirit into a candidacy which, as a result of his own disqualification from holding public office, is headed by his pupil and right-hand man Pere Aragonès. "If I'm the candidate, it's because Oriol is in prison," said the current Catalan vice-president, who described himself as "another link in the chain."

The objective of the ERC campaign for the 14th February elections is to present the party to the non-independence electorate as an inclusive project and not a “threat”, which is how independence is often perceived. Addressing this public, Junqueras explained that ERC works "to improve people's lives" and "does not dedicate criticism to anyone". And as he uttered the phrase, a knot in his throat made him stop. After the emotional moment passed, he found his rhythm again. "No one has to teach us any lessons," he told his opponents, recalling that his party "does not have a single case of corruption". The Republican leader stated that "ERC is the most persecuted and most repressed party" and that this "is not an coincidence."

Conscious that he leads the party with the most voting frontiers on both sides, he took advantage of his reappearance to warn the undecided that "if you don't go to the polls and ERC doesn't win," he'd feel bad for them, because "if ERC doesn't win, those who always win will do so again". From Switzerland, exiled ERC secretary general Marta Rovira explained that they do not want to "impose the Catalan Republic" but are committed to "building an integrative project" and set as an example the massive one-day protest stoppage of 3rd October, 2017.

The expectation for the return of the pro-independence prisoners to the campaign was so great that even the head of the candidacy for pro-independence rival the CUP, and former mayor of Badalona, ​​Dolors Sabater, came to greet Junqueras.

A barb for JxCat, from Rufián

In the days leading up to the start of the campaign, the Catalan government partners - ERC and JxCat (Together for Catalonia) signed a tacit non-aggression pact. While it is true that they try to avoid each other as much as possible and focus criticism on unionist rivals the Catalan Socialist Party (PSC), the temptation to be dragged into reproaches hovers in the air at each and every event they attend and, for both parties, a few barbs end up being tossed.

Gabriel Rufián was responsible for allowing the temperature to rise today. "We are facing people who have won so much that they think the country is theirs." The ERC member of the Spanish Congress reminded those in Puigdemont's party that "magic is for tarot readers or wizards" and that now what is required is "realism".

"As we fight over whatever happened in the past, we give away the future to others," he warned, hinting that ongoing disputes between JxCat and ERC only benefit the PSC. 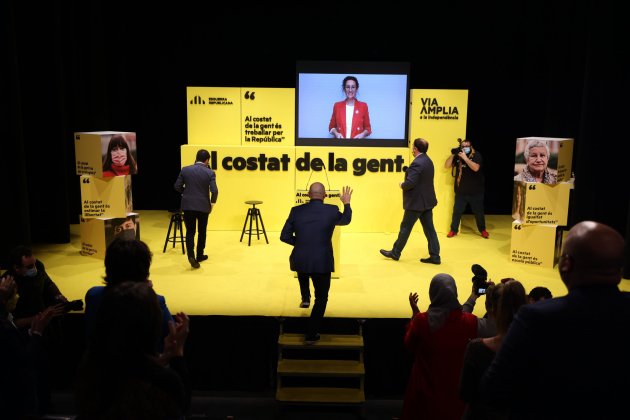 An eye on the Supreme Court

For ERC president Junqueras to be able to take part in the election campaign, leaving the prison where he is serving a 13 year prison sentence for his role in the independence process, several circumstances had to line up. Just yesterday, the Catalan ministry of justice - led by an ERC minister - granted eight of the pro-independence leaders a more open Level 3 prison regime. Thanks to these new conditions, the convicted politicians are able to spend weekends outside the penitentiary and only have to return to sleep between Monday and Thursday.

None of them expects that this situation will last long, and they take for granted a challenge from the public prosecutor's office, as happened last year. The Supreme Court formally revoked their previous Level 3 regime just before Christmas. Given the likelihood that the same sequence will be repeated, ERC will make the most of the days that Junqueras is out among them.