The first day of the two-week campaign for Catalonia's parliamentary election has not only seen the Catalan High Court definitively confirm the February 14th election date, but has also been marked by the release of the January poll by the Catalan government's CEO opinion agency. The survey shows that the Catalan Republican Left (ERC) retains the title of favourite, but by a minimal margin. Together for Catalonia (JxCat) is right behind. The Catalan Socialists (PSC) continue their rise, but are still at a distance. According to the poll, the pro-independence bloc will reach a long-coveted goal: over 50% of the total votes will go to the independence parties. However, other findings suggest that uncertainty remains: almost 40% of voters will stay home, while a third of the electorate doesn't know who to vote for. 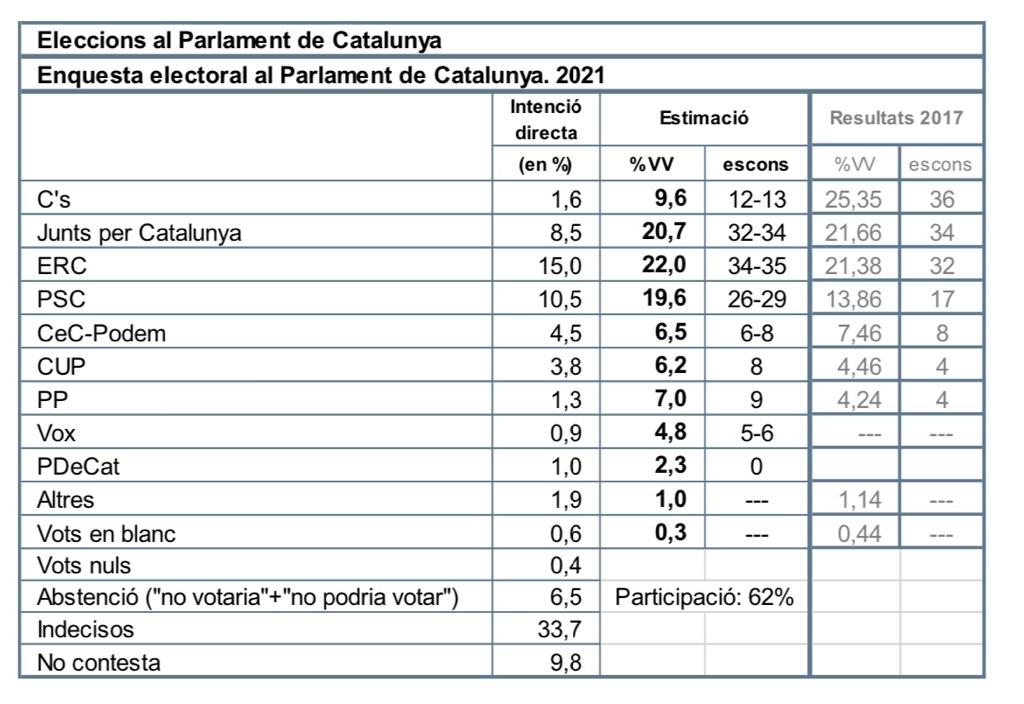 ERC wins 34-35 seats, between two and three more than it has now, and will dispute the top spot with JxCat, which is predicted to lose a maximum of two deputies, although it may still retain the 34 seats it has at present. Meanwhile, continuing to rise in the CEO poll are the Catalan Socialists (PSC). The much-vaunted "Illa effect" achieved by flying in the former health minister as Socialist candidate will translate into 10 more seats, says the poll. However, the new  Socialist total, 26-29, will still be far from what it needs to wrest a triumph from the pro-independence bloc.

As nearly all recent polls predict, the hardest-hit party is Ciudadanos (Cs), which is left with only a third of its current MPs, falling from 36 to 12-13. The left-wing Comuns (ECP) remain stagnant with 6-8 representatives and are overtaken as the fifth force by the right-wing Popular Party (PP), which doubles its representation to 9 seats, just ahead of the most left-wing of the pro-independence parties, the CUP, which also doubles its MPs to win 8 seats. Far-right Vox enters Parliament with 5-6 seats and the pro-independence PDeCAT misses out on winning any MPs. 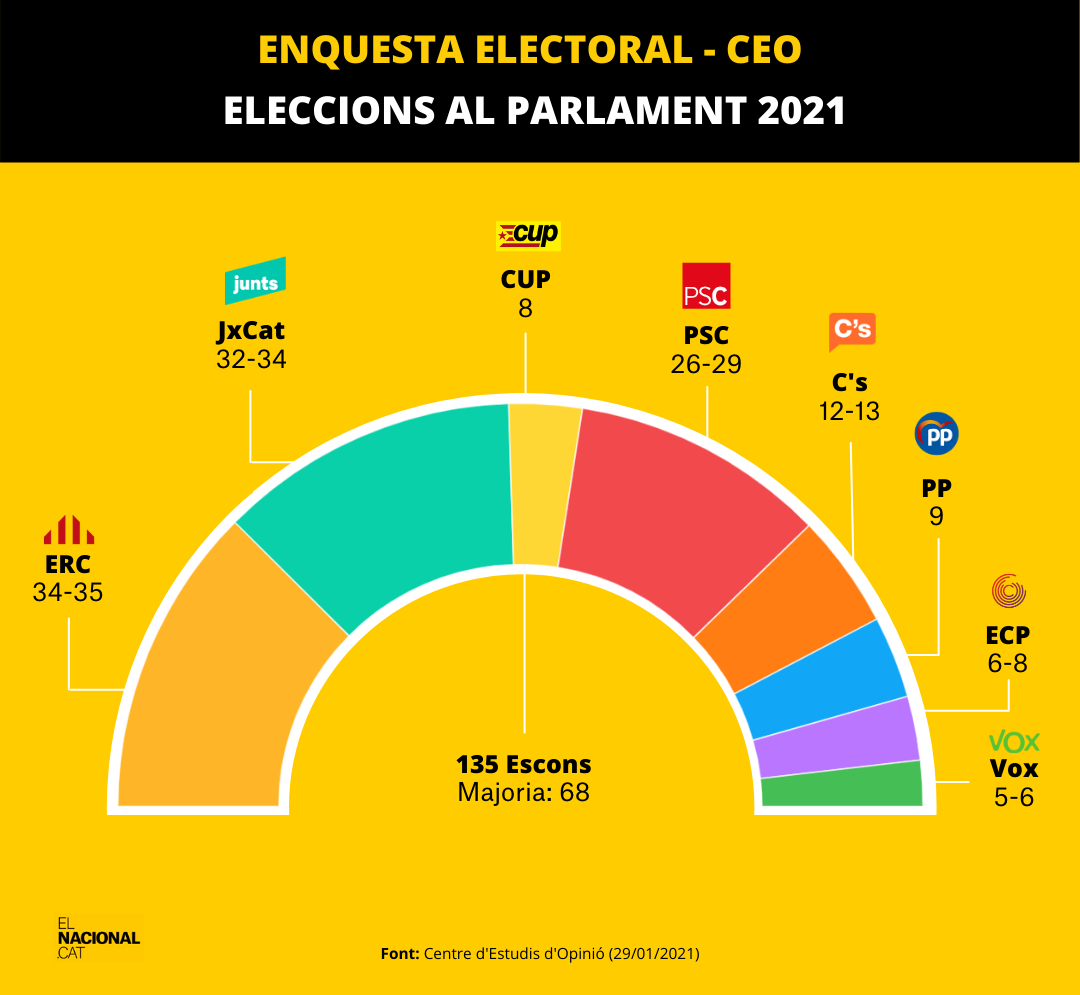 Looking at possible post-election pacts, the poll suggests that for the first time ERC and JxCat might not need any extra support to invest a president. In the best case, they would reach a combined total of 69 deputies, one more than an absolute majority in the Catalan chamber. In the worst case scenario, they would have 66 and would have to look for allies in the CUP or even the Comuns.

Illa won't have the numbers, even with Vox

The operation intended to propel the former Spanish health minister to the Catalan presidency won't pay a dividend, according to the CEO poll. Adding all the Socialist deputies to the totals for the Comuns, Cs, PP and Vox would still not yield a majority. Even counting in the far right party, the most optimistic unionist scenario would fall short of the absolute majority needed by three seats.

Despite the division between the pro-independence parties, there is one goal they all agree on: the value of reaching a combined figure above 50% of the total vote. ERC, JxCat, the CUP and the PDeCAT agree that it is essential to break that barrier in order to keep moving forward, although they disagree on what they should do if they do manage to attract over half of Catalonia's voters. ERC believes it is necessary to repeat such a result in successive elections, without setting an exact figure. On the other hand, Puigdemont's party talks of making a Unilateral Declaration of Inedependence if the pro-independence bloc tops the 50% mark on February 14th.

The largest question mark over the poll and possibly over the election itself is the possibility of a poor turnout. Fear of Covid-19 contagion and the exhaustion of much of the Catalan public with politics suggest a dramatic increase in voter apathy as February 14th approaches. The CEO’s projection is that turnout could fall by almost 20 points. Only 62% of the census would go to the polls, says the public polling agency. In the last Catalan elections, on December 21st, 2017, the opposite happened. Voter participation hit a record, close to 80%.

In parallel, the poll indicates that more and more voters are unsure. If the previous CEO poll assessed that 22.7% of voters were undecided, that figure has now risen notably, to 33%. One in three voters have not made up their minds.