Four days were not been enough to heal the rift between the Republican Left (ERC) and Together For Catalonia (Junts). Pere Aragonès’s attempt to be invested president has failed again, but unlike last Friday, today’s session cleared the path towards a pact between the republicans and Junts. In the conversations held in the plenary recess, important members of the negotiating parties considered a pact after Easter a done thing. The feeling in ERC’s ranks is that Junts wants them to do penance for their old sins, the capital one being refusing to invest Carles Puigdemont as president, three years ago. 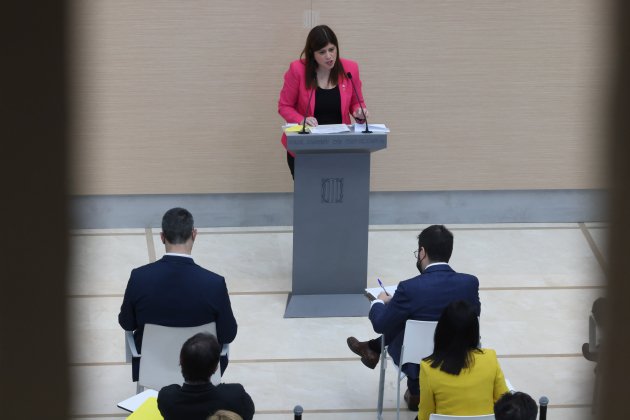 Today only the Popular Unity Candidature (CUP) supported Aragonès, who once again was left with 42 votes in favour, 61 against (Catalan Socialist Party -PSC-, Comuns, Vox, Ciudadanos -C’s-, and the Popular Party -PP-), and 32 abstentions from Junts. Neither first, nor the second time; so third time lucky. ERC’s candidate admittd he is “obliged” to come to an agreement with Junts, and prepared his second speech to seduce them, detailing his proposal about a national alliance. Sergi Sabrià voiced the Republican Left’s indignation with Junt’s attitude. He invited them to “digest” the results of the February 14th elections

A President not subject to control

References to the work done by Torra’s and Puigdemont’s governments, textual citations from the president in exile in Waterloo, acknowledgement of the Council for the Republic. All in all, repeated winks and a clear warning: he will not be a ward, his leadership at the forefront of the Generalitat is “irreplaceable and non-transferable.

Slower than desirable, but the conversations progress towards a solution. Gemma Geis, charged today to explain her party’s position, pointed this out: You know perfectly well that no one from Junts will impose any obligations, and less so from exile. You know that it is very clear that your presidency remains outside the collegiate leadership.”

Now that the Council for the Republic issue is about to be solved, and acknowledging that today’s speech was much more to their liking, Junts pointed out the problematic issues which still prevent coming to an agreement. The insist that joint action by the pro-independence MPs is in Madrid is needed, something that ERC -which have three times more seats than Junts in Congress-, are reluctant to support. They also call for more concrete plans regarding alternatives, once the Spanish state refuses to accept a referendum at the negotiating table. In sum, Junts agrees that there are no unsurmountable obstacles, but in order say yes to a legislative agreement, it demands that all loose ends be tied up.

From today’s debate something else is clear. To secure Junt’s 32 votes, ERC runs the risk of losing those of CUP. Junt’s spokesperson warned that they do not support the agreement between the Republican Left and the anticapitalists. The reasons is there are  disagreements about the social program -around the universal basic income-, but also because they feel there are gaps in the roadmap towards the Republic. 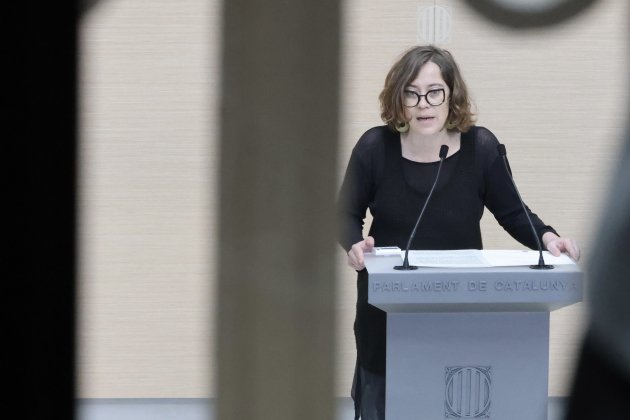 CUP has sounded the alarm, in the face of Junts’ criticisms. Eulàlia Reguant warned that “the universal basic income is non-negotiable” and regrated that “it’s a bad start if there is no willingness to accept a minimum agreement”, as the one negotiated by CUP and ERC. Ever since the day CUP’s bases green-lighted the document agreed upon with ERC, Reguant forewarned that if any point of the pact was modified in order to include Junts, her party would have to vote again.

ERC will have to juggle in order to fit the future government partner with the steady allly in parliament. Alone Junts and ERC do not have the majority. If one thing has been made clear in the last few years is that agreements with CUP may change.

If any adjective fits Jèssica Albiach it is persevering. Whenever possible she tempts ERC to finally part ways with Junts, and go over to the Comuns side. 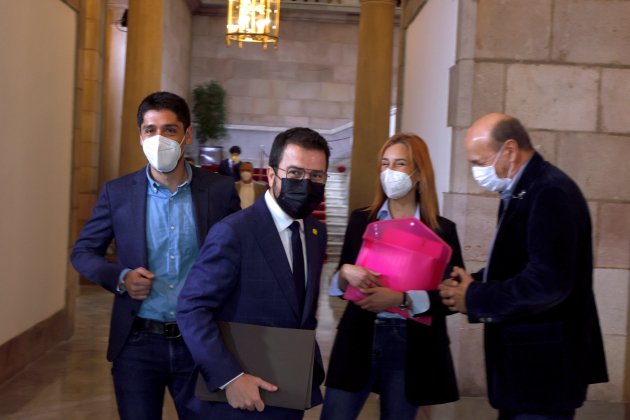 Aragones with the Comuns MPs / EFE

To this end, she asked Aragonés to “come out of his comfort zone” and dare to form a left-wing-oriented government with them. She did so implying that he is being “extremely humiliated” by Junts.

Disregarding the fact that he does not have any exctra support beyond the 33 PSC deputies, Salvador Illa insists in underlining that he is the winner of the February 14th elections in Catalonia. The socialists intend asking Laura Borràs again to allow the former minister to stand for the. presidency

In his answer Aragonès reminded Illa what matters is not winning but knowing how to forge alliances to have a majority. 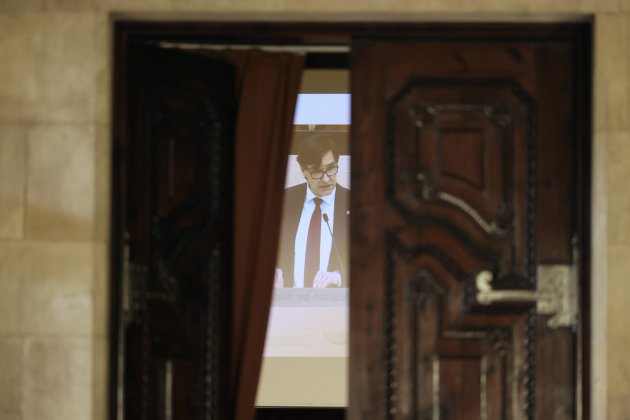 Ciutadans and the dustbin of history

During his intervention, Illa prophesized Aragonès would be a “vicarious” president, “hostage” of Puigdemont and CUP. C’s, who went from first to second-to-last party, expressed themselves in the same terms. Carrizosa warned that Aragonès would be Waterloo’s puppet, subject to the CUP’s permanent “blackmail” to finish as Mas, in the dustbin of history. In his proverbial irreverent tone, he qualified Laura Borra’s biased attitude as speaker of Parliament as “repugnant”. As a parting shot he stated “I don’t give a fig about the Council for the Republic”.

“It’s about time the umbilical cord was cut”. Waterloo has decided to systematically humiliate you”. This is what Alejandro Fernández -from the PP- said to Pere Aragonès. Furthemore, with his usual irony he invited him to spend “some time in the Catalan PP” to get used to criticism, and get rid “of the fear of being called a Spain-lover [botifler]”

As happened last Friday, when the extreme Right took the floor, most MPs of ERC, Junts, CUP and PSC left the chamber. Those who stayed, raised antifascist banners as a protest against Ignacio Garriga’s intervention. Vox’s leader complained to the speaker, arguing that nazi symbols were being shown. Borràs, however, defended their right to show them. In his speech, he went as far as demanding that CUP be outlawed.

Rather than refusing to answer Vox, Aragonès used the opportunity to counter their speech. He did so in order to refute the mantra of certain unionism sectors, which accuse the independence movement of “wielding ethnic reasons”. “I demand that nobody exploits the origins of a very large part of this country, which has roots outside Catalonia. ERC’s candidate presented himself as an example, recalling that his grandparents Antonio and Juana, came from Palomares, Andalusia, in order to forge themselves a future” 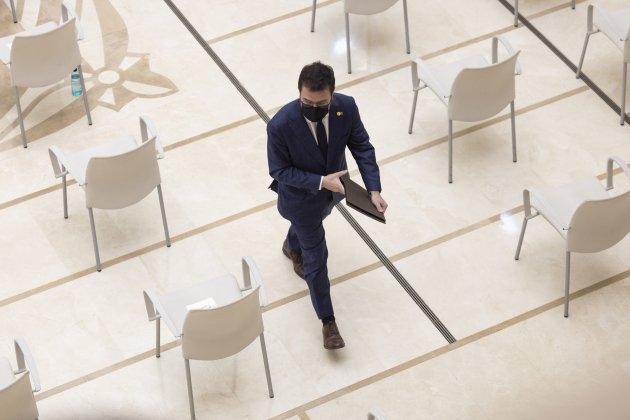 No precedent for investiture at the third attempt

Never since the return to democracy, has a president been appointed at a third attempt. Artur Mas is the only one who failed in the first two attempts in the year 2015 and ended up withdrawing in favour of Carles Puigdemont. If Aragonès is invested in the next two months he will be the first president ever to have been rejected twice before.

The deadline for Parliasment to choose the 132nd Generalitat president finishes on May 26th. If by the last Wednesday of May there is no investiture, elections will take place again in mid-July