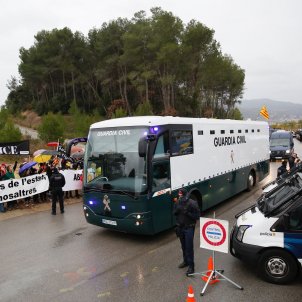 Two associations for officers of Spain's Civil Guard have come out in defence of a colleague who used social media to mock the jailed Catalan pro-independence leaders while taking part in their transfer to Madrid on Friday. The Associación Unificada de Guárdias Civiles (AUGC) and the Unión de Guárdias Civiles (UnionGC) gave their support to the fellow officer who was suspended after the recording and subsequent sharing of a video during the transport of the political prisoners to Madrid for their upcoming trial.

In a press statement, the AUGC protests about the "defenceless" of the Civil Guard officer involved after the decision by the paramilitary police force's director general, Félix Azón, to suspend him for three months, a move which means that "his professional career and image will be severely damaged, when he himself has not even been heard or allowed a minimal defence". The association considers it "absolutely deplorable" that Azón is treating the alleged actions as very serious, as a failure to comply with the officer's "duty of loyalty to the Constitution in the exercise of his functions" and in "the performance of disrespectful acts or the public dissemination of contrary expressions or signs".

The AUGC states that it will defend the suspended civil guard with all its available means, given a situation that "can only be understood as the prioritization of political interests that must come from beyond the director of the Civil Guard's own management, impartial and objective, of his functions."

UnionGC also rejected the decision made by the force's senior management, since "the Civil Guard and its components must not be the scapegoats for a witch hunt". In addition, both UnionGC and AUGC make strong criticisms of the Catalan Mossos d'Esquadra police command which, as UnionGC says, "carry out actions punishable by their own internal regulations as well as by higher legal norms with total impunity."

The video, recorded during the first stage of Friday's transfer of the prisoners from the Brians 2 jail to those of Alcalá Meco and Soto del Real, is accompanied on Twitter by a text message which reads: "The ultranaZionalist coup-plotter prisoners, leave for Madrid. Only a few dozen sad people have come to say goodbye to them. The nighttime ritual gatherings beside the prisons are over. Beautiful!!"

The video itself shows images from within the Civil Guard van, looking out through its windows, and the audio features a man's laughter along with music: a song whose lyrics, in fact, mock the Civil Guard itself. 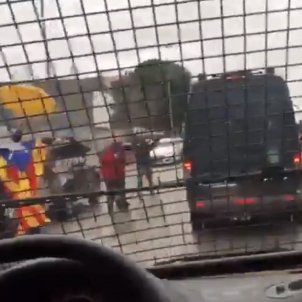 Independence Trial Video: The Civil Guard's disrespect to the Catalan prisoners during their transfer to Madrid El Nacional

editorial Where are the guarantees of the Supreme Court's impartiality? José Antich