Spain's Supreme Court won't set the start date for the trial of the Catalan pro-independence leaders for next week after all.

Whilst expectations had been coalescing around a start date of 5th February, according to news agency EFE, it is now expected around 12th February, the latter of the two dates considered probable.

The court still has to rule on the final filings entered by lawyers in the case. It also has to draft the order on which of the witnesses and evidence the defence and prosecution request to bring it will accept. The judges will set the start date for the trial in that same order.

Also for consideration are the petitions from some of the lawyers, including those representing Oriol Junqueras and Jordi Cuixart, calling for there to be some time left between the announcement of the start date and that start date itself. If that's not granted, they could possibly argue it violates their clients' right to defence.

The court's seven judges are taking longer to draft their final orders than expected because of the volume of material submitted for their consideration. Whilst prosecutors' filings total over 300 pages, the documents from the defence for the 12 accused make up more than 1,800 pages. Only once they have decided on all that can they set the start date.

For the moment, it is unclear whether this will affect the prisoners' transfer to Madrid, currently scheduled for tomorrow. Indeed, on only 23rd January, the chamber's head judge, Manuel Marchena officially informed the interior ministry the court planned to start the trial "on dates close" to 5th February, so the ministry could ensure the transfer took place in time.

The prisoners are to be transferred from their current jails in Catalonia, first all to the transfer centre Brians II, then to others near Madrid (Soto del Real for the men, Alcalá Meco for the women) so they can attend the court in Madrid during their trial.

According to El Món a Rac1, president Quim Torra and a large portion of the Catalan government plans to wave the prisoners off from Brians II; minister Jordi Puigneró said they plan to hold a special cabinet meeting on Friday to coincide with the transfer. The president also plans to attend the first public session of the trial in Madrid.

It's not only the Catalan government that's planning to show their support to the prisoners during their transfer. The Catalan National Assembly (ANC) has announced its final plans for demonstrations along the route.

Attendees are asked to take banners and estelada "starred" pro-independence flags and to not block the path of the vehicles. The first demonstration starts at 5am, along the route from Puig de les Basses (where Dolors Bassa is being held) to Brians II. At 6am, there will be two others, from Lledoners (the male prisoners) and Mas d'Enric (Carme Forcadell) to Brians II. Finally, there is one from 7am "along the route from Brians II to Soto del Real".

That evening, there will be protests in the capitals of Catalonia's counties at 7pm. As El Nacional reported yesterday, ANC is also organising ongoing protests to start on Monday and last the duration of the trial. 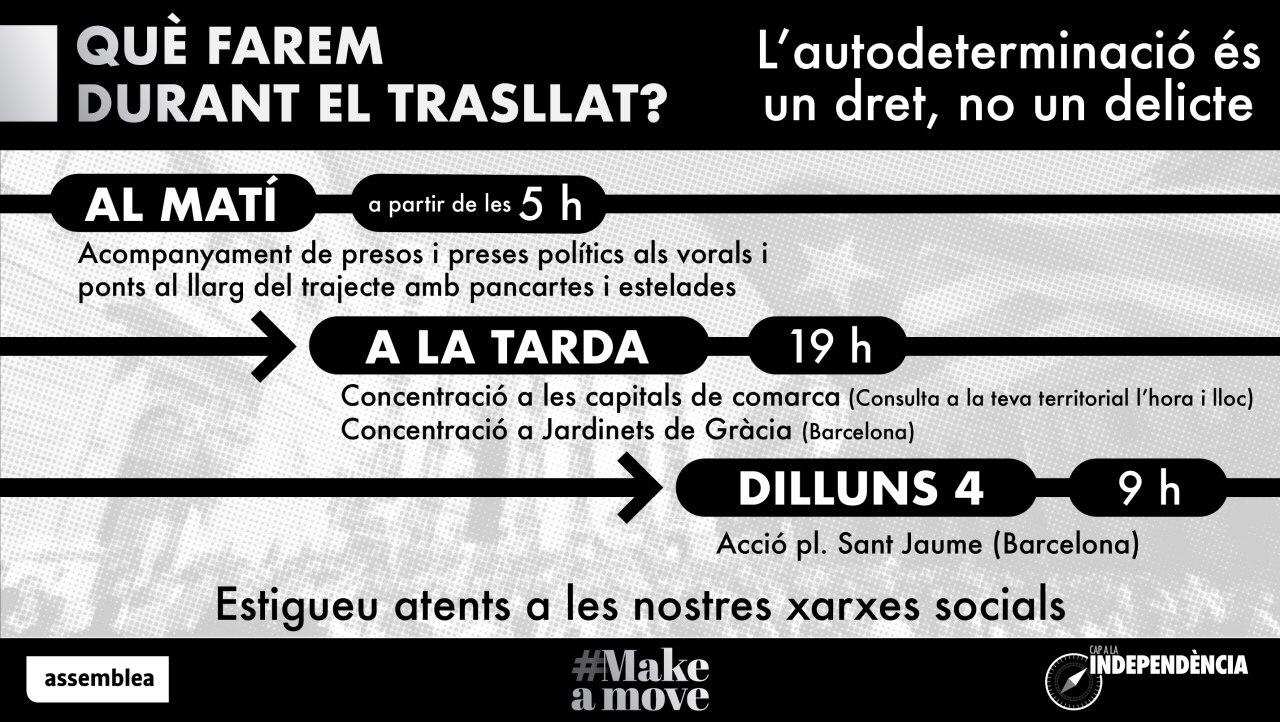