Oriol Junqueras, Raül Romeva, Josep Rull, Carme Forcadell and Dolors Bassa - five of the former Catalan pro-independence prisoners who were released from jail after receiving partial pardons in June - are to take part this Saturday, October 23rd in the demonstration organized by the organization Sare in defence of the rights of the imprisoned members of ETA - the Basque terrorist group which renounced its armed struggle for independence exactly ten years ago.

In addition to the pro-independence leaders, representatives of Basque political parties PNB and EH Bildu, as well as left-wing Podemos will be present. Trade unions such as ELA, LAB, UGT, STEILAS, ESK, EHNE, Etxalde, Hiru, CNT and CGT will .

The demonstration, under the slogan Ibilian ibilian, etxerako bidea ("Step by step on the homeward path"), will take place in the city of Donostia (San Sebastián), starting at 5pm in the Old Town and will end with an event on the Boulevard. 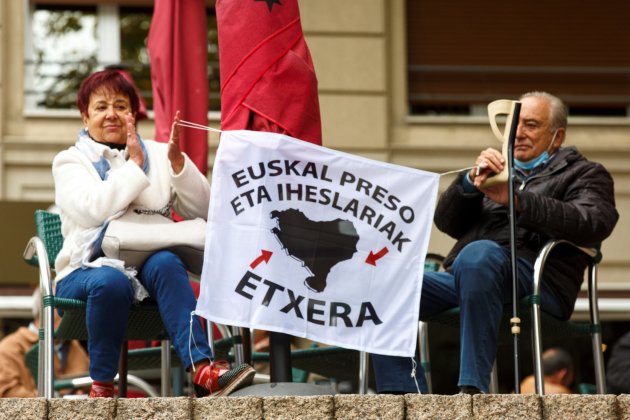 Banner calling for the ETA prisoners to be brought closer to Euskadi, the Basque Country / Photo: Efe

ETA, in the focus

The demonstration by the prisoners comes just days after they and ETA have once again been in the focus of Spanish political debate, coinciding with the 10th anniversary of the dissolution of the armed organization.

EH Bildu leader Arnaldo Otegi has been in the centre of the controversy. First for his forthright declarations that ETA's violence "should never have happened". Then for asserting that his pro-independence party EH Bildu would vote in favour of the Spanish government budget if the ETA prisoners were released.

Otegi's statements inflamed the Spanish right, which yet again accused Sánchez of allying with the "terrorists" to maintain power. On the other hand, the position of the leader from the abertzale (pro-independence left) wing of Basque politics was seen more positively by the Socialists of the PSOE and especially by the Catalan pro-independence parties.

Although the Spanish executive has denied it is negotiating on this issue, it is true that since the Socialists and Unidas Podemos arrived at the Spanish government palace, the transfers of ETA prisoners to prisons closer to the Basque Country have sped up. This is precisely what Sare wants to keep happening.

At an event held this Wednesday in Donostia, the leader of the organization fighting for the rights of ETA prisoners, Joseba Azkarraga, acknowledged that "there has been progress and at Sare we have stated this."

“We can talk about the beginning of a change in prison policy that opens a pathway for real change, but it will only continue to move forward if we keep walking all together,” he claimed. "There are only 10 prisoners who have been granted a Level 3 (open prison) regime, when more than a third of the total, about 70 prisoners, should be in this situation and 52 of them should be on parole," he added.

The concession of Level 3 regimes and other leave privileges was a controversial issue in the case of the nine Catalan political prisoners, who saw their open prison regimes twice granted and twice withdrawn by different parts of the Spanish justice system. In June this year, all nine of the pro-independence Catalan leaders were granted partial pardons the same after the Council of Europe approved a strongly-worded report calling for their release.