The Lledoners seven reaffirm their commitment to the independence struggle

The seven political prisoners who have been held in Catalonia's Lledoners jail have left. And they have done so reaffirming their commitment to the independence of Catalonia and the struggle for an amnesty measure. The clemency granted by the Spanish government, which depends on them not reoffending, and their release to freedom has generated contradictory sentiments that the seven prisoners wanted to clarify in front of the hundred or so people who came to see them step definitively out of the prison gates. In fact, at the moment of their departure, whistling could be heard, quickly covered by chants of "Independence!"

As strong as ever, it was Jordi Cuixart who started a round of speeches in which all those speaking coincided in thanking the groups that have supported them as well as the force of the Catalan public. 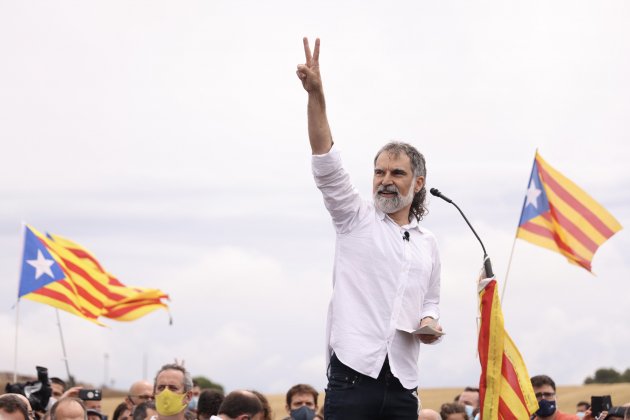 The first words, however, were to remember the exiles Carles Puigdemont, Marta Rovira, Toni Comín, Clara Ponsatí, Anna Gabriel and "for all those who today are suffering the hardest from repression," said Cuixart from the stage, set up near the prison on the occasion of their departure.

They have not silenced us

"Today is not a day of giving anything up, it is a day that we reaffirm, that we continue to fight, in order to leave no-one behind," the Òmnium Cultural president proclaimed during an energetic  speech which the audience acclaimed. "The repression has not beaten us and will not beat us. There is no pardon that will silence the people of Catalonia. Today they have not silenced us, today we have come out to show our faces and we will never be silent," said Cuixart.

Jordi Cuixart: "We will continue exercising all of the rights convicted by the Supreme Court"

Jordi Sànchez: "And special gratitude to the people who have never failed, who have come to say 'good night' to us daily since 2018"

"We are leaving all together, with dignity"

Jordi Sànchez was next to speak. In a much calmer address, the general secretary of the Together for Catalonia party made clear references to the conditional nature of the pardons: "We are all leaving together, with dignity, united, up on our feet to win the freedom of this country, we will not back down. We will not accept any silence in exchange for a pardon".

"For all of the people who believe that this country will win its freedom, for all those men and women who on 1st October cast their vote confident that the country would be an independent state in the form of a republic, we'll do it, we'll do it together and we'll do it well. We will win," said Sànchez.

Quim Forn: "This banner from 1992 represents the continuity of the struggle"

Quim Forn left the prison carrying a "Freedom for Catalonia" banner - written in English, from a campaign carried out for the Barcelona Olympic Games of 1992, and also signifying his long period as a Barcelona city councillor.

"If we are out here today it is because you have helped us to get out," said Forn, reaffirming his pro-independence sentiment. "We are stronger than ever and these convictions lead us to say that we will continue to fight for independence and against the repression. Working for the amnesty and for justice in our country," he concluded.

Josep Rull: "In the worst moments of prison, looking at images of the 1st October referendum made me think 'what dignity, what an honour to serve these people'... we are leaving stronger than when we went in."

Jordi Turull: "I also want to remember Muriel Casals and the words she said, 'Our smile is their defeat'."

Josep Rull also expressed his gratitude for all the support, reaffirmed his commitment to the independence struggle and, like Jordi Turull, explicitly spoke out against any image of giving in to the pardons. “They’ve given us conditional, reviewable, and partial pardons that make them feel very strong: our commitment to culminating what we started on 1st October is neither conditional, nor reviewable, nor partial,” Turull said.

Raul Romeva: "The more than 3,000 people still facing threats and charges have to know that we will be with them from the first to the last moment, as you have been with us."

"Nothing ends today. We are going out to work for freedom," said Raül Romeva, who preceded Oriol Junqueras in the speeches that took place minutes after their release from Lledoners prison.

Oriol Junqueras: "Many of our fellow prisoners are an example of hope and humanity and we will also work for justice within the prisons." 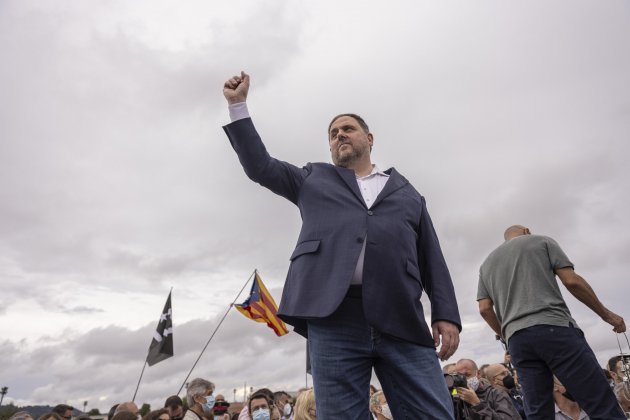 "Prison has not buckled us at all. The country needs us as much as always and more than ever," said Junqueras, who ended with a cry to return to politics "everything that should never have left politics".