The "clean hands" message of ERC: "We're not shadowed by corruption"

If for his return to election campaigning he chose Badalona on Friday, this Monday afternoon Oriol Junqueras took to the stage on the other side of the metropolitan area, in L'Hospitalet de Llobregat. The event, on day four of the campaign for Catalonia's February 14th elections, was a palpable, raw display of the reality faced by the pro-independence prisoners: if normally, the star speaker appears to close an election meeting, Junqueras went on first. Due to force majeure: at eight thirty he had to be at Lledoners.

“I’m going back to jail,” he said at the end of his speech. And he had to leave without being able to stay to listen to his Catalan Republican Left (ERC) colleagues. While the Level 3 open prison regime granted last Thursday to the nine convicted leaders allows them to leave their jails during the day, during the week they have to return to sleep in their cells every night. "They only beat us when they remove us from the stage, when they imprison us," said Junqueras, referring to the Catalan Socialists (PSC), whom he accused of "rejoicing" because he cannot campaign "on an equal footing." 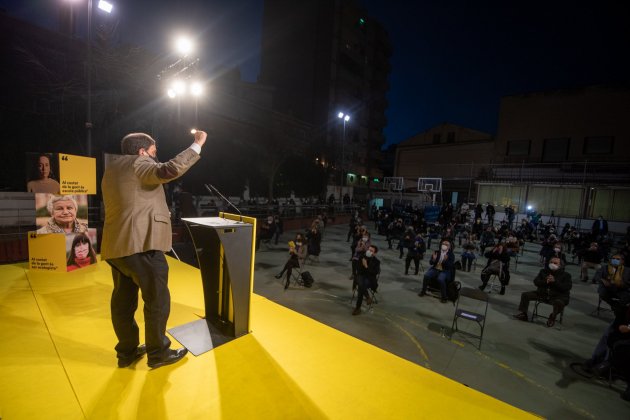 The setting chosen today was aimed to present the PSC and pro-independence rivals JxCat (Together for Catalonia) as two sides of the same coin, that of corruption. In L'Hospitalet, the Socialist Núria Marín is mayor, and she is also the president of Barcelona's Diputació, the provincial authority, thanks to the support of JxCat, which shares the provincial administration with the Socialists. In fact, the controversial Diputació agreement has been a major focus of conflict between JxCat and ERC throughout this legislature and is the great weapon of the Republicans against Puigdemont's party, as it has maintained its pact with the Socialists even after the corruption allegations against Marín.

ERC, the Robin Hood of corruption

Using this example, Junqueras explained that "this country has been experiencing the epidemic of corruption for many years." Corruption, an epidemic that is “contagious,” he said. And he presented ERC as the Robin Hood of Catalonia in the fight against this scourge. "We are the ones who fight corruption, against tax fraud, the ones who get the money out of the pockets of the corrupt to put it at the service of the people", because "the money that the corrupt put in their pockets is money that doesn't go to schools and hospitals, to sport, to the fight against poverty".

The ERC leader affirmed that in 2020, the Catalan economy ministry led by Pere Aragonès "reclaimed 240 million euros from tax fraud." Aragonès himself carried on the words of his mentor, stating that ERC is "the clean alternative to those who always have shadows of corruption." And recovering the slogan popularized by former ERC leader Carod Rovira in 2003, he stated that his party aspires to "a country of clean hands and free speech", in contrast with "40 years of corruption" from those "cover up their shame". 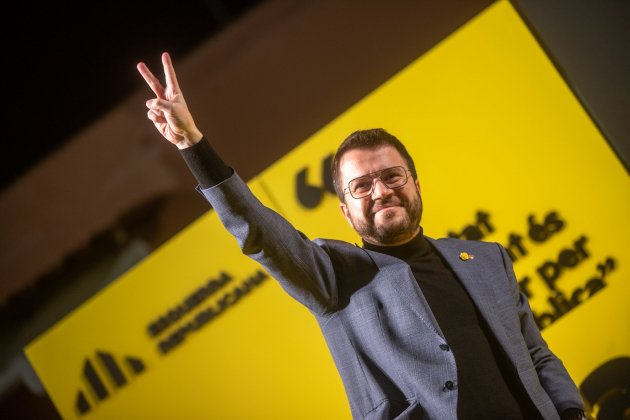 Soften the image of independence

The ERC operation to win support in the metropolitan area of Barcelona, to catch voters disillusioned with the Comuns and Socialists has been in preparation for months at party headquarters. The Republican Left are focusing their campaign on softening the image of the independence movement, which is often perceived as a threat by some segments of the population.

It was this public that Junqueras invited to “vote for ERC even though you may have never voted for them” and even if they only vote ERC in this election to “end the eternal majorities of the PSC” in the ring of cities on the periphery of the Barcelona metropolitan area.

In the same vein, Gabriel Rufián described the PSC as the "Partit Sanchista de Catalunya" and reproached JxCat for giving the presidency of the Diputació to the Socialists "just so that ERC would not have it".