Dani Gallardo, the 23-year-old Spanish man who has spent the last year in prison after being accused of assault following a Madrid protest against the jailing of the Catalan pro-independence leaders, has denied in court on Friday that he attacked officers who were trying to arrest his friend - also charged in the case - Elsa Vikki. He explained that several police officers were beating his companion and he tried to protect her with his body.

“I preferred to have them hit me than her,” he said. Gallardo denied that he had picked up a piece of wood and allegedly beat officers - as police and prosecutors claim - or that he was part of any anti-system group. The prosecution is calling for six years' imprisonment for him, and the court does not plan to issue a verdict until December.

Asked by the public prosecutor, Gallardo denied a whole series of police claims: he stated that he did not take part in the rally in favour of the jailed Catalan leaders nor in the confrontations between protesters and police that took place in Plaza Santa Ana. He did not move rubbish containers into the road or throw objects at the police. Nor did he abuse passers-by or pick up the piece of wood which police claim he used as a weapon. According to Gallardo, he acted only to defend his partner, whom the police were assaulting.

His friend Elsa Vikki - for whom the prosecution demands two years in prison - also denied that they were involved in the rally or in the incidents, and described how they were having a beer when the confrontations took place at the protests. According to Vikki, they both ran "out of fear" when the riot police charged, but that she had an anxiety attack, which allowed a police officer to catch her and hit her with his baton. 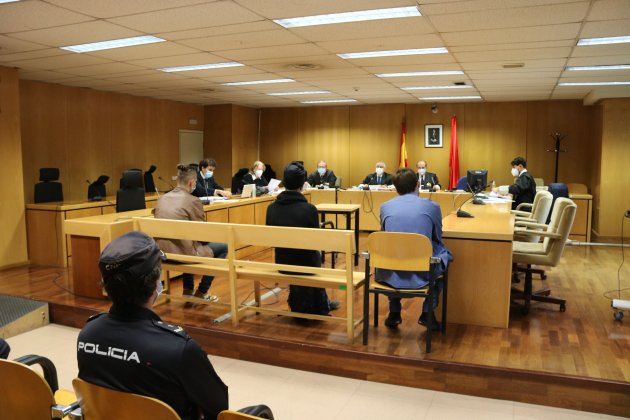 The pair both denied that Gallardo had grabbed the piece of wood and assaulted the officer who was trying to arrest him. They assert that at that time, there were between five and seven police officers who caused injuries to the woman.

Among the witnesses who testified today were the riot squad members who were part of the police operation. One of the officers explained that that afternoon about 600 people had taken part in the rally, which had been communicated to the authorities in advance. He said that, as well as policing the rally itself, the riot police had to suppress the appearance of far-right groups that tried to break up the demonstration and had already provoked some fights with the protesters.

According to the officer, after those incidents a group of about 70 people who had taken part in the rally in favour of the Catalan prisoners separated from the bulk of the demonstration and began throwing cobblestones at the police in the vicinity of the Congress of Deputies. Then, he said, there were "riots all over the city," referring to downtown Madrid.

Support outside the court

Gallardo appeared before the court on this first day of the trial, which will have a second session on November 17th.

About twenty members of the Madrid Anti-Repression Movement, which has led Gallardo's defence, gathered outside the Provincial Audience court in Madrid, and parliamentary deputies Laura Borràs (JxCat), Carolina Telechea and Montserrat Bassa (both ERC) also attended, expressing their solidarity with what they consider a new case of state repression against  those protesting the verdicts.

"Yet again, here we are in Madrid, supporting people who have suffered repression," said Laura Borràs, stressing that Dani Gallardo's rights had been breached for a whole year. This is something that "we are used to from the Spanish state", added Carolina Telechea. "First they punish, then they ask questions," she said.

"As sister of a political prisoner, I've experienced this myself and it's a complete aberration that a 23-year-old man has been imprisoned for a year for showing solidarity with Catalan independence," said Montserrat Bassa, sister of jailed former Catalan minister Dolors Bassa.