On the last day of the Catalan election campaign, ERC wanted to defend their candidate for the presidency, Oriol Junqueras and, in front of Estremera prison, near Madrid, that's exactly what they've done. The vice-president has been held now for 42 days alongside Interior minister Joaquim Forn.

"Today is the last day of campaigning, and the first where we can be closer to our candidate, a good man, fair and peaceful, a candidate who hasn't been able to defend his ideas on equal footing with the rest of the candidates", said Marta Rovira, Junqueras' deputy. Behind her, a small but loud group of demonstrators from Hogar Social shouted anti-independence slogans against the rally: "They don't trick us, Catalonia is Spain", "where is the little bear?", "separatists, terrorists" and "Puigdemont to prison".

With Rovira at Estremera were Carme Forcadell, the speaker of the Catalan Parliament, and minister Raül Romeva, the latter returning to the prison's gates for the first time since he was released after 32 days in custody. They were accompanied by the first 15 candidates from the party's Barcelona candidates list, the first five from their lists for the other provinces and Congress deputies like Joan Tardà.

Rovira denounced that Junqueras is in prison so he cannot defend his political project and "because they know that he's the best candidate to lead the Catalonia of the future".

The visit comes the day after it emerged that the candidate will face disciplinary measures after having used one of the telephone calls he is entitled to record his remarks to headline ERC's central campaign event in Barcelona on Saturday. 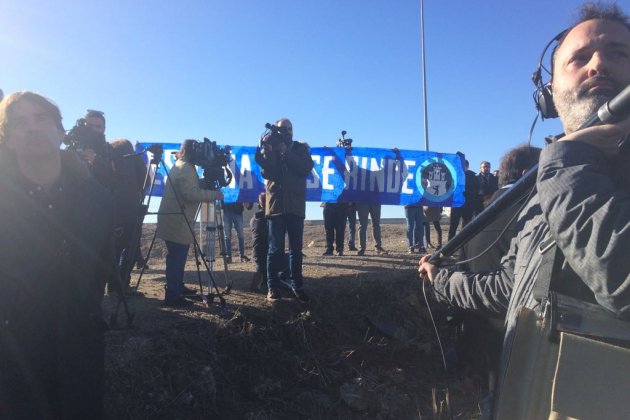 "We want to build Catalonia from its diversity, because we believe that diversity is richness. Catalonia, which is a people of peoples, has persisted in constructing a single people and in Catalonia, ahead of all ideas, we always put democracy first, from which point political differences and discrepancies are resolved", said Rovira from the middle of a crowd of journalists and cameras. The members of Hogar Social from Madrid unfurled a banner reading "Spain doesn't surrender" between two Spanish flags.

The demonstrators were few, but very loud and closely monitored by the Civil Guard. A few metres further on, right at the gates of the prison, a man with a Spanish flag and a loudspeaker played the Civil Guard's hymn and Que viva España, among other unionist favourites. 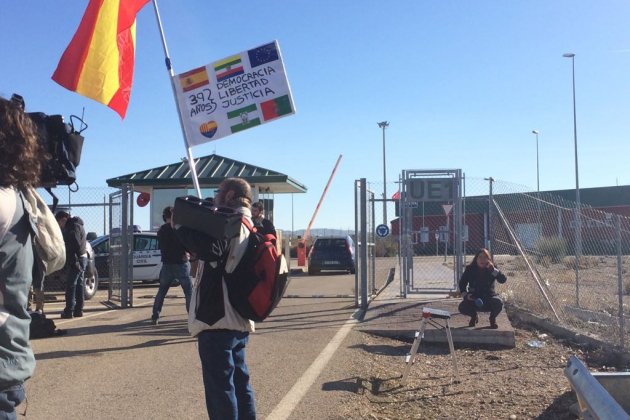 Romeva denounced that anyone who knows Junqueras or Forn, who he shared a cell with in prison, or Jordi Sànchez or Jordi Cuixart, also imprisoned, but in Soto del Real, knows that the risk they are labelled with of generating "tumultuous violence" is absolutely false. "Their personal histories attest to a non-violent fight for human rights," he said.

"In this campaign we've run they've not heard even a single message of hate for Spain or for the Spanish people. Because [such hate] doesn't exist. What there is is a demand for there to be justice, for democracy, the separation of powers and people to be respected", he said.

The minister insisted that they want to explain ERC's message directly to Spain and described the imprisonment of the pro-independence leaders as unjust and abnormal when they've not even faced trial.

He expressed his regret that Junqueras hasn't been able to take part in the campaign other than via telephone message he's been punished for. "That's a repressive message, it doesn't respect the free expression of the public," he said.

"On the 21st, democracy is at stake, and coming to the doors of Estremera was a way to place ourselves in front of the mirror," he explained.

After the speeches, as the protesters continued, Rovira and deputy Esther Capella entered to visit Junqueras thanks to their status as lawyers.