This Friday is a day of general strike in Catalonia, but it's certainly not a day of inactivity. The strike called in protest at Spain's repression of the Catalan independence movement, sentencing nine pro-independence leaders to long prison terms, has brought many shops and offices to a standstill, with a high percentage of workplaces staying closed according to organizing union Intersindical-CSC.  But as the day goes on, the streets are filling with protests, and the numbers are being bolstered as the huge three-day Marches for Freedom arrive in the city at the end of 100km (60 miles) of walking.

Tens of thousands of demonstrators are arriving on foot to the Catalan capital, filling and blocking the main access roads into Barcelona. The five columns that left from Tàrrega, Tarragona, Berga, Vic and Girona on Wednesday, have now converged into three huge protest masses. And at midday Friday they are on the final leg before their arrival in the centre of Barcelona to coincide with the main protest march on Friday afternoon at 5pm. 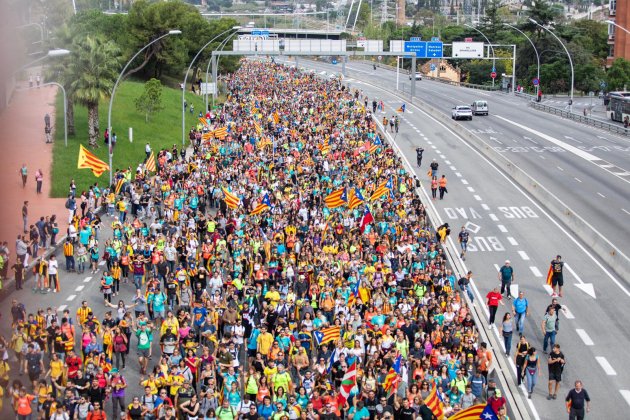 The Marches have been arriving in Barcelona along three entry routes: Avinguda Meridiana; Gran Via as far as Plaça de les Glòries; and the upper part of Avinguda Diagonal.

Initiated by the pro-independence civil groups Òmnium Cultural and Catalan National Assembly (ANC), the marches have seen protesters walking across much of Catalonia's territory since Wednesday morning, calling for the release of the Catalan prisoners, supporting the right to self-determination, and rejecting the current repression. A sixth column of marchers, organised by the Committees for the Defence of the Republic, was due to leave Castelldefels on Friday morning, also headed into the city. 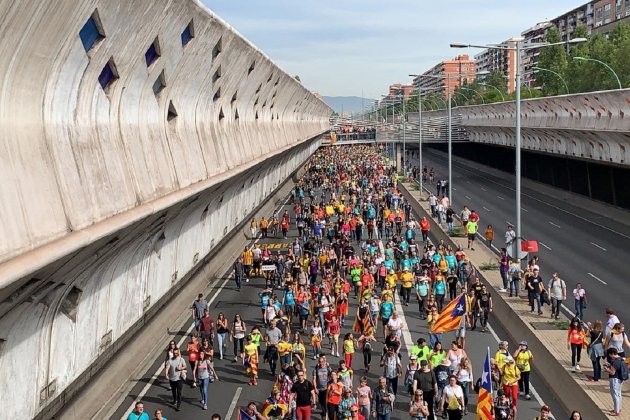 The column from Girona entering via Gran Via. Photo: Sergi Alcàzar. Below, its earlier pass through Badalona.

At midday there were major traffic holdups along the N-II, the A-2, the C-58 and the C-31. The real-time traffic status can be consulted here (information in Catalan). RENFE rail service on the city's suburban lines can be checked here, also in real-time and in Catalan. 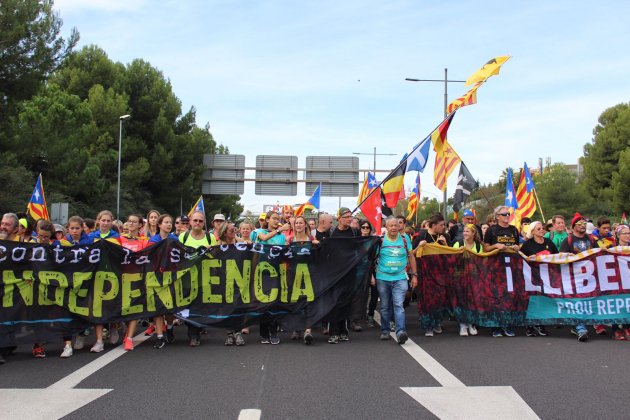 The head of the march entering via Av. Diagonal. Photo: Anton Rosa.