Spain's National Audience court has ruled that it will proceed to a trial of Mohamed Houli Chemal, Driss Oukabir and Said Ben Iazza, three alleged members of the terrorist cell that attacked Barcelona and Cambrils on 17th and 18th August 2017.

In its written ruling, the court decided that the three defendants will be tried for the crimes of membership of a terrorist organization, manufacture, possession and deposit of explosives and attempts to cause damage. However, in the end it has decided not to try the men for murder.

Several of the prosecutions, including lawyers representing some of the 16 victims of the jihadi attacks, asked the court for the accusation to be extended to include the defendants' part in the deaths in the Rambla and Cambrils, but the court rejected this as the defendants were not able to be attributed with "actions of which they were not accused in the court record."

Accusations relating to the Alcanar explosion

None of the three have been prosecuted as responsible for the 16 dead and 140 wounded in the attacks in Barcelona and Cambrils, as the alleged perpetrators of those two attacks were killed by the Mossos d'Esquadra or in the explosion of the house in Alcanar. The court recalls that in the indictment document, the participation of the defendants in the events that took place in Barcelona or Cambrils was clearly excluded, and the judges added that if they were to order the prosecution or an extension of the accusations they would thus be "evaluating the rational indications of crime against particular individuals" which would make them, the judges, "lose their impartiality". 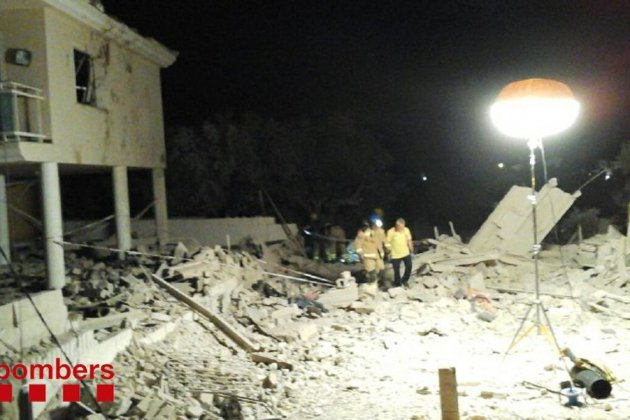 Aftermath of explosion in the house in Alcanar where the terrorist group was preparing explosives. / Catalan Fire Service

However, it is not ruled out that the other prosecutions in the case may accuse the defendants of enacting terrorist damage, attempted murder or injury with a terrorism character, due to the accumulation of quantities of explosives in the Alcanar home with which even more massive killings were being prepared.

The investigation into the attacks

Mohamed Houli Chemlal and Driss Oukabir have been in pretrial detention since August 2017, when they were arrested days after the attacks, and Said Ben Iazza since September of that year.

According to the investigation, the van used in the attack on Barcelona's Rambla was rented in the name of Driss Oukabir. Houli Chemlal was injured in the explosion of the Alcanar villa in which the Imam of Ripoll, considered the leader of the terror cell, died.

The National Audience court closed the investigation into the attacks in Barcelona and Cambrils in August 2017 on January 7th this year, and sent the case to the court's criminal chamber to begin the trial. After the publication of today's ruling, the prosecutions taking part in the trial will now quantify the sentences they are demanding for each of the defendants.